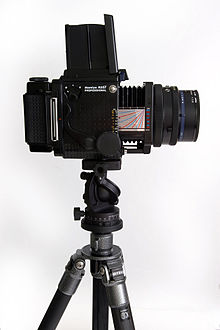 RZ67 Pro I ready for shooting

The Mamiya RZ67 line of medium format single-lens reflex cameras manufactured by Mamiya includes three successive models, the RZ67 Professional (first model released in 1982), RZ67 Professional II (released in 1995) and RZ67 Professional IID (released in 2004). RZ67 is a modular camera system, meaning lenses, viewfinders, ground glasses, film winders and film backs are all interchangeable. It is primarily designed for studio use, but can also (though with reservations) be used in the field. The RZ67 Sekor lenses have built-in electronic leaf shutters which are cocked and triggered from the body. Focusing is performed with a bellows on the body instead of the lenses.

The camera accepts 6x7, 6x6 and 6x4.5, 120 and 220 film magazines and Polaroid as well as Quadra 72 4x5 sheet film backs. Mamiya RB67 backs are also supported via the G-Adapter. The film speed is set on each RZ back via a dial. There are two versions of the 6x7 and 6x4.5 backs, the model II versions have a second film counter to always show the film count on the top. The RZ67 operates on one 6V silver oxide 4SR44 battery, or 6V 4LR44 alkaline battery. It can be used in emergency mode fully mechanically with a fixed 1/400 sec shutter speed. Multiple exposures are possible in the M-mode. Mirror flip up is supported. The body has one standard flash hot shoe on its left side, one plug for a standard remote shutter cable release, and a socket for an electronic shutter trigger. The RZ67 measures 104 mm (W) x 133.5 mm (H) x 211.5 mm (L) with the 110mm f/2.8 lens, and weighs approximately 2.4 kg (5.29 lbs). The flange distance is 105 mm.

The RZ67 name is adopted from the model name of the Mamiya RB67 (where RB stands for Revolving Back), which was first introduced in 1970, thus the RZ67 also takes backs which can be rotated 90 degrees to provide a horizontal or vertical composition. The orientation is shown in the viewfinder with black guides. The viewfinder also hosts LEDs informing of the state of the camera (flash ready, low battery, dark slide not removed, shutter not cocked). In addition to manual operation (photographer chooses aperture and shutter speed), the RZ67 is able to operate in AEF mode with an AE viewfinder (AE being an abbreviation for automatic exposure), which transmits exposure information directly to the body. In RBL compatibility mode, the RZ67 is able to use RB67 lenses. The biggest difference between RB67 and RZ67 is, that RB67 is completely mechanical. The RZ67 has also mechanical couplings between the parts, but the shutter is electronic, and parts are able to transmit exposure information with electronic couplings. In addition, the RZ67 has plastic exterior body, which makes it somewhat lighter.

There are a wide variety of lenses available for the RZ67: