The Duchy of Florence (Italian: Ducato di Firenze) was an Italian monarchy that was centred on the city of Florence, in modern Tuscany, Italy. The duchy was founded in 1532 when Clement VII (ruler of the Papal States and Florence and Pope of the Catholic Church) appointed his illegitimate son (some historians suggest he was the son of Lorenzo II, Duke of Urbino) Alessandro de' Medici Duke of the Florentine Republic, thereafter making the previously-existing Republic of Florence a hereditary monarchy. Florence had been under unofficial Medici control since 1434. The Duchy of Florence had two Dukes, Alessandro and Cosimo I. Alessandro ruled as Duke until his assassination in 1537. Cosimo was chosen to succeed his distant relative by Florentine authorities. Cosimo established a strong Florentine navy, and made the greatest single territorial acquisition to Florence, the annexation of the Republic of Siena after it lost the Battle of Marciano in 1554. Cosimo was elevated to grand duke of Tuscany in 1569 by the Pope. This ended the Duchy of Florence and paved the way for Medici rule in Tuscany until 1737, upon the senior line's extinction.[1]

Upon the Duchy of Florence's foundation, it occupied the same area as its predecessor, the Republic of Florence. The duchy was created because the title "duke" would bolster Medici power in the region.[2] The Medici, had just a few years prior to the duchy's creation, had their supremacy over Florence restored by Holy Roman Emperor Charles V,[3] as Pope Clement VII had been deposed since 1527 by Florentine rebels during the War of the League of Cognac.[3][4] 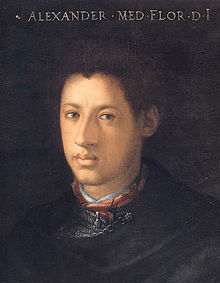 In 1535, a delegation with the intent of asking Charles V to depose Alessandro was dispatched by several prominent Florentine families, including the Pazzi (who attempted to kill Lorenzo de' Medici in the Pazzi Conspiracy). This delegation was headed by Alessandro’s cousin Ippolito de' Medici. Charles V rejected the delegations’ appeals, much to their dismay. Charles V had absolutely no intention of deposing Alessandro (Alessandro was married to Charles' daughter Margaret of Parma, and therefore her safety could be put at stake by Ippolito’s plot).[5]

Alessandro’s tenure as duke lasted less than four years. Alessandro was murdered by his distant relative Lorenzino de' Medici on January 1, 1537.[6] Alessandro had no legitimate issue.[4]

Cosimo I de' Medici was selected by Florentine authorities to succeed Alessandro shortly after the latter's death.[7] At the news of this, the Strozzi family, who were in exile, attempted to invade Florence and depose Cosimo, but the Strozzis ultimately failed.[8] Cosimo completely overhauled the bureaucracy and administration of Florence.[9] In 1542, the Imperial troops stationed in Florence by Charles V were withdrawn.[10]

On April 17, 1555, Florence and Spain occupied the Republic of Siena after a brief conflict. Philip II of Spain bestowed the territory on Cosimo as a hereditary male-line fiefdom, in July 1557. Siena had been collapsing for quite some time before its annexation. In 1548, Cosimo purchased Elba from the Republic of Genoa, and based his new developing navy there. Cosimo founded the port city of Livorno and allowed the city’s inhabitants to enjoy freedom of religion.[11] The ducal family moved into the Palazzo Pitti in 1560.[12] Cosimo commissioned the architect Vasari to build the Uffizi, as offices for the Medici bank, continuing the Medici tradition of patronage of the arts. 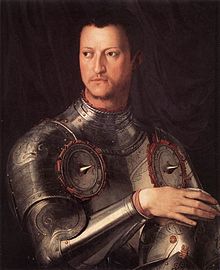 Cosimo was elevated to the rank of grand duke of Tuscany in 1569 by Pope Pius V. The monarch was now entitled to the style Highness.[13] Medici rule continued into the Grand Duchy of Tuscany until their extinction in 1737.[4]

Following the Republic's surrender in the Siege of Florence, Charles V, Holy Roman Emperor issued a proclamation explicitly stating that he and he alone could determine the government of Florence.[14] On 12 August 1530, the Emperor created the Medici hereditary rulers (capo) of the Republic of Florence.[15] Pope Clement VII willed his relative Alessandro de' Medici to be the monarchical ruler of Florence, and went about requisitioning that dignity carefully; he wanted to give the impression that the Florentines democratically chose Alessandro to be their monarch.[15] In April 1532, the Pope convinced the Balía, Florence's ruling commission, to draw up a new constitution. The document in question was officiated on the 27th of that month. It formally created a hereditary monarchy, abolished the age-old signoria (elective government) and the office of gonfaloniere (titular ruler of Florence elected for a two month-term); in their place was the consigliere, a four-man council elected for a three-month term, headed by the "Duke of the Florentine Republic". The Senate, composed of forty-eight men, chosen by the constitutional reform commission, was vested with the prerogative of determining Florence's financial, security, and foreign policies. Additionally, the senate appointed the commissions of war and public security, and the governors of Pisa, Arezzio, Prato, Voltera and Cortona and ambassadors.[16] The Council of Two Hundred was a petitions court; membership was for life.