Dhofar Sports, Cultural, and Social Club (Arabic: نادي ظفار الرياضي الثقافي الاجتماعي‎; also known locally as Al-Zaeem, or "The Leader(s)" because of their great success, or just plainly as Dhofar) is an Omani sports club, based in Salalah. Their home stadium is Al-Saada Stadium, but also recognize the older Salalah Sports Complex as their home ground. Both stadiums are government owned, but Dhofar also own their own personal stadium and sports equipment, as well as their own training facilities in the heart of Salalah on Al-Salaam Street.[1]

Dhofar is the most successful club in the Omani League, with a total of nine championships,[2] and seven Sultan Qaboos Cups[3] to its name, as well as reaching the final 12 times. Dhofar has also reached the final of the 1995-1996 Gulf Club Champions Cup, only losing to Saudi giants, Al-Nassr. The club has never been relegated to second division, along with counterparts Al-Nasr S.C., whom which they have a long lasting rivalry with. Although being relatively younger in foundation than many other Arab clubs, which generally were founded in the 1920's, 1930's, and 1940's, Dhofar have been ranked as the 30th most successful club title-wise in the Arab World with a total of 19 titles.[4]

The idea for the founding of a club in Salalah began in the 1960s resulting in various meetings from the townspeople. The names considered for the new club were Al-Ahlia, Al-Nahda, Al-Arabi, and Al-Shaala, but the name to be chosen for the club was to be "Al-Shaab", a name literally translating to "The People",[5] and in 1968 the new club was finally founded.

2 years later the young club merged with neighboring club, Al-Shaala, from the Dahariz district of Salalah, and re-founded as Dhofar in 1970 appointing Salim Al-Kathiri as the club's first president, a position which was held by him until 1975.[6]

Dhofar, along with neighbors Al-Nasr have been generally labeled as the front runners of the Omani League, but as seen in the '08, '09 season, the clubs both performed horribly with Dhofar losing many games, and not going far in the Sultan Qaboos Cup, along with Al-Nasr even fighting a relegation battle.

The club is currently making a season comeback with their performance in the Sultan Qaboos Cup by reaching the final against a lower-leveled Saham tying in a thrilling 2-2 match then losing 6-7 in a penalty shootout after playing 30 minutes of extra time only to lose against the opposing team.

Dhofar also received second place in the 2009–10 Omani League losing only a few points short of first-time winners, Al-Suwaiq,[7] and in the process qualifying for the 2011 AFC Cup.

After the end of the second-place finishes earlier in the 09-10 season, Dhofar made major signings and re-signings in order to boost the club's performance in future competitions.[8] 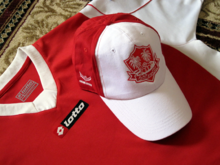 Like the national team, Dhofar have also long-chosen red as the color to represent them. Historically, Dhofar usually wore a red jersey with white shorts, but during the 90's, and the new millennium Dhofar began to wear a full-red kit.

Over the years Dhofar have had numerous kit providers, ranging from Puma, to Lotto, and Grand Sport. As of now, Grand Sport provides Dhofar with kits.

Dhofar have also had many different sponsorships over the years, but rarely featured a shirt sponsor (only during notable matches such as the Sultan Qaboos Cup final.) Omani newspaper, Al-Watan, Dhofar Insurance, and Al Makan Cafe have all been featured on Dhofar's kit at one point in their history. Al Makan Cafe have most recently been used as Dhofar's shirt sponsor during the 2009/2010 Sultan Qaboos Cup Final, and in the friendly match against Swiss club, FC Zurich.

Dhofar has won the most Oman League titles with a total of 9. 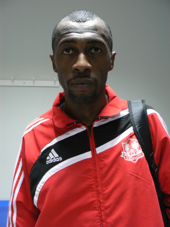 Dhofari captain, Hani Al-Dhabit has been on Dhofar for over a decade.

Many of Oman's greats once played on Dhofar.