2009 sees the beginning of the 34th edition of the Omani League known locally as the Oman Mobile League.

12 clubs play each other on a home and away basis, although this year OFA has restricted the Oman Mobile League to six main venues the main one being Sultan Qaboos Sports Stadium (SQSC) in Bausher, the other venues are Seeb, Ibri, Salalah, Sur and Sohar. This is to meet the policy of Asian Football Confederation (AFC) criteria on the average attendance of spectators for professional league matches.[1]

The Oman Mobile League comprises 12 teams and 66 matches and will be played over a period of three months.

The winner qualifies for the 2011 AFC Cup 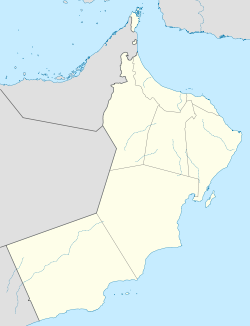 Suwayq
Locations of teams in the 2009–10 Omani League

Updated to games played on 7 May 2010
Source: [1]
Rules for classification: 1) points; 2) goal difference; 3) number of goals scored.
1Qualified by winning the 2010 Sultan Qaboos Cup.
(C) = Champion; (R) = Relegated; (P) = Promoted; (O) = Play-off winner; (A) = Advances to a further round.
Only applicable when the season is not finished:
(Q) = Qualified to the phase of tournament indicated; (TQ) = Qualified to tournament, but not yet to the particular phase indicated; (DQ) = Disqualified from tournament.

Updated to games played on 7 May 2010
Source:[citation needed]
1The home team is listed in the left-hand column.
Colours: Blue = home team win; Yellow = draw; Red = away team win.
For coming matches, an a indicates there is an article about the match.