The story of No More Heroes 2 is told with normal cutscenes following Travis' journey, interspersed with scenes of a woman at a peep show dictating the story's events to an unknown observer.

Three years have passed since Travis Touchdown became the top assassin in the United Assassins Association (UAA) and walked away (what happened to him throughout said years is never explained). Now, he returns to Santa Destroy and fights Skelter Helter, who seeks revenge on Travis for killing his older brother Helter Skelter prior to the first game. After winning the battle, he meets Sylvia Christel again, who informs him he is now ranked 51st. The nearly-dead Skelter Helter interrupts them and warns Travis that he and his co-conspirators will still have their revenge.

The same night, a group of criminals kill Travis's best friend, Bishop, and throw his head through Travis's window in a paper bag. Travis seeking revenge, asks Sylvia to set up the next fight. Sylvia tells him that the one who ordered the killing was Jasper Batt, Jr., the CEO of Pizza Bat and first-ranked assassin. In the first game, Travis stopped three different attempts by Pizza Bat (called Pizza Butt back then) to expand into Santa Destroy by assassinating the CEOs. In the three years since, with Travis out of the picture, Pizza Bat successfully opened a headquarters in Santa Destroy and bought out practically every business in town. Travis resolves to climb to the ranks to get a chance for revenge on Jasper.

Travis fights and defeats rap star Nathan Copeland. He then meets football star Charlie MacDonald and his cheerleaders, who transform into a giant Mech called the Santa Death Parade. Travis defeats them in his own mech, the Glastonbury, built by Dr. Naomi and based on a mech from his favorite anime. He feels remorse for the cheerleaders, explaining that they were harmless, but backpedals after Sylvia offers to nullify his victory. He also spares the optional challenger (the only way to fight her is by going back to the motel after beating Charlie) Kimmy Howell, commenting that he "can't kill a co-ed". He also begins to fight the supernatural, facing Matt Helms and Cloe Walsh.

Travis fights a grueling battle against Ryuji. Travis crows triumphantly after Ryuji concedes, but Sylvia kills him in cold blood, criticizing Travis for showing mercy. Henry, suffering from hibernation sickness, fights Mimmy (a mixture of the anime girls and robots Travis watches) in a nightmare before awakening. He reconciles with Travis and kills the next three assassins for him. Travis fights Margaret Moonlight, a gothic Lolita, and Captain Vladimir, a cosmonaut, and convinces Sylvia not to destroy the latter's body. After defeating ascetic Alice Twilight, the penultimate assassin, he decides he is fed up with the ranked battles and the UAA. He berates Sylvia, insisting that assassins are human and that they shouldn't have to die for entertainment like its some kind of video game. He promises to tear down the UAA after defeating Jasper. Sylvia then arrives at Travis's motel room and sleeps with him, finally fulfilling her promise from the first game.

Travis fights his way through the Pizza Bat headquarters to meet Jasper in his office. Jasper reveals that he was seeking revenge for his father and two brothers, the previous Pizza Butt CEOs Travis killed in the first game. Henry enters and helps Travis defeat him. After defeating his second form, Jasper becomes a giant parade balloon, which Henry refuses to fight and destroys the roof with one swipe. This final form is destroyed after Travis leaps out the office and slices it in half. Sylvia, riding Travis's motorcycle, catches him and drops him off at his motel.

A scene after the credits reveals that the woman at the peep show is Sylvia, who took the job after the UAA's collapse, and that Travis himself has been listening to Sylvia's story about his exploits. The two have a tearful reunion as Travis informs her that they need to return to Santa Destroy for an unknown purpose.

The combat is similar to that of No More Heroes, with mechanics such as wrestling moves and deathblows returning.[9] There are four beam katanas, which Travis can freely switch between in the middle of battle, each with different properties. For example, the Peony is a large and heavy sword with a wide range, and the Rose Nasty consists of two beam katanas which Travis dual-wields.[10] Although Travis starts at rank 51, there are only 15 boss fights. There are two sections in which Shinobu and Henry are playable, both of whom have different capabilities from Travis. Shinobu can jump, and her section contains some platforming elements, while Henry has the ability of making a quick dash in all directions by using the B button on the Wii-remote.

The overworld from the first game is gone, and Travis no longer has to pay an entry fee to enter ranked battles, allowing the player to progress through the game more quickly. The minigames that Travis can do to gain money and become stronger are now 8-bit style games, in genres including action, puzzle, and racing. Another new feature is a "Deathmatch" mode, allowing the player to replay any of the bosses once the game has been completed.

Desperate Struggle was announced on October 8, 2008, where a teaser trailer for the game was shown at the Tokyo Game Show in Chiba, Japan. The trailer provides little insight to the premise of the game, other than that the player will once again take control of Travis Touchdown, the protagonist from the first game. Following No More Heroes' suit of pitting Travis against unique adversaries, the trailer sees Travis preparing to battle a woman fitted with a six-limbed jet pack. It has been stated that this time around, Travis is fighting for revenge, and that he has also become more serious about fighting than he was in the first title.[11] Also, similar to the first game's numerous references to popular culture, in the trailer Travis says the Terminator series' catch phrase "I'll be back!" before initiating a sequence with music similar to that of the Terminator series' scores.

Plans for a No More Heroes sequel were first revealed shortly after the release of the first game, in a March 15, 2008 interview with Computer and Video Games, where Suda revealed he would be interested in producing a No More Heroes 2 for the Wii, on the condition that the game sold well enough to convince its publishers.[12] With No More Heroes' positive reception in North America, and Martin Defries, manager of Rising Star Games who were responsible for publishing No More Heroes in Europe, raving about the sales of the first game,[13] not only was it unlikely that Suda's intention to direct a follow-up would go unsupported, but this meant it was likely that the sequel would not be published exclusively in Japan. Release dates for Desperate Struggle in North America and Europe have been confirmed. It was announced at TGS 2008 that Xseed Games would publish the game in North America, taking over from Ubisoft which had published the North American release of No More Heroes, while Rising Star Games would again handle the European release.[7] Ubisoft, however, announced at E3 2009 that they would be publishing the game in North America.

Suda has stated that the game incorporates a strong theme of revenge. While he suggested the game would be more serious, he still wanted to maintain the game's sense of humor. He has also acknowledged the criticism that was made that the open world in the first game was less than satisfying, and hopes to add more detail this time around.[14] 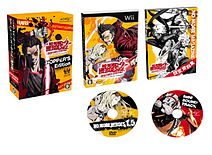 Desperate Struggle was to be released in Europe in both "extreme" and mild formats, to appeal to European fans who were disappointed by the bloodless version of No More Heroes that was published in their region. However, the mild version was skipped in favor of the original edition.[15] Marvelous, the Japanese publisher for Desperate Struggle, is also releasing a special "Hoppers Edition" in Japan, which will include the game, a DVD containing a movie titled No More Heroes 1.5 (which bridges the gap between the two games), a CD soundtrack, and a fan book. An erotica comic is also included when preordering this edition.[5]

No More Heroes 2: Desperate Struggle has been met with generally favorable reviews, receiving a score of 84/100 on Metacritic.

IGN praised the game for its quirky sense of humor, stream-lined design of the play experience, numerous pop-culture references, humorous sexual innuendo, 8-bit minigames and impressive graphics.[22] Game Informer praised the new side-jobs and action while criticizing the repetitive voice work and occasionally rough graphics.[18] X-Play stated that, while the navigation and minigames have improved, the story can be inconsistent in later missions and some bosses are frustrating.[23] GameSpot called the combat system "remarkably fun and interactive" and commended the game's "excellent use of motion controls." [19] Jonathan Holmes of Destructoid stated "It's extremely well crafted from beginning to end, and rarely (if ever) sacrifices fun for delivering a message." GameZone's Caleb Newby stated that "Desperate Struggle is so unpredictable it’s like the punch line to a parody of Japanese pop culture. Frantic and all over the map, it somehow makes it all work and gives Wii owners an amazing game for an older audience – a rare treat to find on Nintendo’s console."[21]

According to Electronic Entertainment Design and Research (EEDAR), the game sold less than 30,000 units in its first week of release in North America.[24] Desperate Struggle debuted on the UK charts at number five during its release week in that region.[25] The game was the 13th best-selling game in Japan during its release week at 11,373 copies sold.[26]

Suda has announced that No More Heroes 2: Desperate Struggle will be the last No More Heroes game on the Wii. He was quoted by saying "I think this is the last [No More Heroes] that is going to be developed on Wii. To expand [No More Heroes] to new possibilities, we need a new platform. Wii is a great platform, but we've done everything we can with it now."[27] He has since clarified this statement, stating that he intends to continue No More Heroes on the next Nintendo system, likely with a protagonist who is not Travis Touchdown. "I've finished the story for Travis [Touchdown]. It's completely finished in No More Heroes 2." Anything developed will involve "a different character, or something like that within the series."[28]

In another interview with Kotaku, Suda51 stated he had no intentions of doing a sequel, but he had a change of heart due to the strong sales of the original. "I originally didn't want to make another No More Heroes," he said, "The game was supposed to be a one off dealio, but when the title did well, sequels do happen." [29]

Suda 51 recently announced a new No More Heroes game exclusively for mobile phones on the DeNA service. He promises to make the game extremely violent and hopes the game will be released in the West. He also states that he hopes the game is successful since he has "over 100 concepts for mobile games." [30]

Recently after the reveal of the WiiU, Suda51 stated that he has all sorts of ideas for a 3rd No More Heroes for the new platform.