Desperate Romantics is a six-part television drama serial about the Pre-Raphaelite Brotherhood, first broadcast on BBC Two between 21 July and 25 August 2009.[1]

The series was inspired by and takes its title from Franny Moyle's factual book about the Pre-Raphaelite Brotherhood, Desperate Romantics: The Private Lives Of The Pre-Raphaelites.[2]

Moyle, a former commissioning editor for the arts at the BBC,[3] approached writer Peter Bowker with the book, believing it could form the basis of an interesting television drama.[4] Although Bowker had a self-confessed "horror of dramatised art biography", he felt that Moyle's book offered something different, viewing the Brotherhood's art largely through the filter of their tangled love lives.[4]

Discussing the series' billing as "Entourage with easels", Moyle said: "I didn't pitch it as 'Entourage with easels' ... I pitched it as a big emotional saga, a bit like The Forsyte Saga. Having said that, I think it was a useful snapshot – a way of getting a handle on the drama."[3] The series has also been billed by the BBC as "marrying the Pre-Raphaelite Brotherhood to the values of Desperate Housewives."[5]

Desperate Romantics was the second time the lives of the Pre-Raphaelite Brotherhood had been dramatised for television, the first being The Love School — a six part serial first broadcast in 1975.[6] It was heavily influenced by the earlier series.[7]

Each episode focuses around the composition and/or exhibition of a particular painting by a member of the Brotherhood; these images are available to explore on the BBC website with an audio commentary.[9] Prominently featured works are:

Other notable images include:

The poem Rossetti writes for Lizzie as she recuperates from her ordeal in Millais' bath tub is "Sudden Light" (c.1853-4, published 1863).[10] The final stanza, which Rossetti reads aloud to Lizzie before they first make love, appears in the 1870 edition of Rossetti's Collected Poems.[11] Also featured are "Newborn Death" and "The Kiss". The verses read at Lizzie's funeral by her sister are from Lizzie's own poem "Dead Love" (c.1859).[12] 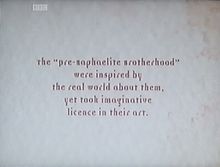 One of the disclaimer slides that appear at the beginning of each episode.

Each episode begins with the disclaimer: "In the mid-19th century, a group of young men challenged the art establishment of the day. The Pre-Raphaelite Brotherhood were inspired by the real world about them, yet took imaginative licence in their art. This story, based on their lives and loves, follows in that inventive spirit."[13] In an interview for The Independent, Moyle noted that Bowker's adaptation of her source material required a "chronological sleight of hand" turning "the story that plays out in the book over 12 years into something that feels as if it's taking place over a couple of years – to keep up the pace, to make it feel modern."[3]

When Desperate Romantics was first shown on BBC Two it attracted 2.61 million viewers.[8] The first episode received mixed reviews; Tom Sutcliffe in The Independent described the series as "an off-day" for writer Peter Bowker, adding: "It was never quite recklessly anachronistic enough to suggest a defence of predetermination for those moments in the script that seemed more like a spoof of an artistic biopic than a genuine attempt to rise above its limitations."[27] Serena Davies wrote in The Daily Telegraph that the episode: "sadly didn't go far enough in conveying to the viewers how much the Pre-Raphaelites’ art contrasted with what had gone before it."[28] Caitlin Moran, reviewing the episode for The Times, described it as "so bone-deep cheesy that it appears to have been written with Primula, on Kraft Cheese Slices, and shot on location in Cheddar."[29]

The Guardian review described the first episode as: "a rollicking gambol through a fictionalised Victorian London with a narrative as contemptuous of historical reverence as its rambunctious subjects were."[30] Andrea Mullaney, writing for The Scotsman, also considered it: "a rollicking romp ... it's rather good fun", but cautioned: "historical purists will have to clench their thighs as it plays fast and loose with accuracy – much like the Pre-Raphaelite Brotherhood themselves, for all their vaunted insistence on painting the truth of nature."[31]