The Democrats in Norway (Norwegian: Demokratene i Norge, DEM),[7] formerly and commonly known as the Democrats, is a Norwegian political party. The party was formed in 2002, chiefly by former Progress Party members. It is led by Vidar Kleppe, a former Deputy Leader and Member of Parliament for the Progress Party. The main issues for the party are a more restrictive immigration policy, tougher law and order measures, improved health care and reduction of taxes. The party considers its values to be based on Christianity and Norwegian heritage.

The party has no representation in the Norwegian Parliament, although MP Jan Simonsen (who had been elected with the Progress Party) became aligned with the party upon its creation, ending when his parliamentary term expired in 2005. The party claimed 2,000 members in 2009,[8] and 3,000 members in 2011.[1] As of the 2011 local elections, the party has eight representatives in five municipal councils, and one representation in a county council (Vest-Agder). 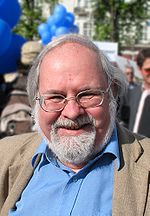 Jan Simonsen, who joined the Democrats as an MP, thus being the first and so-far only MP for the party.

The Democrats was founded on 24 August 2002 at Hotel Linne in Oslo,[9] primarily by former Progress Party members, but also former members of the Labour Party, Conservative Party, Liberal Party and Socialist Left Party.[10] In November of the same year, the party successfully gathered 5,200 signatures (5,000 required), and was legally registered as a party. The new party's leader, Vidar Kleppe, had a vision that the party should have a role as an ombudsman at grass roots level, similar to what he considered that Anders Lange once had.[11][12] As Member of Parliament Jan Simonsen (who was expelled from the Progress Party in 2001) joined the party upon its creation, the party was until 2005 also effectively represented in the Norwegian Parliament (technically, he had to sit as an independent).[11][13][14]

One of the components of the new party was the minor Social Democrats,[14] previously known as the Generation Party, which in turn had been formed as a splinter group of the Pensioners' Party.[13] The Democrats originally tried to take advantage of this party's status to run for election. This led to a struggle about the Democrats' right to put up lists in more counties. The conflict was resolved, and subsequently both the Democrats and the Social Democrats were eligible to contest elections in Norway.[15] Later, the Democrats went on to draw leading figures and members from parties such as the Fatherland Party and the Norwegian People's Party.[16][17]

By August 2003, the headquarters of the Democrats in Kristiansand had reportedly been vandalised eight times.[18] In its first elections, the 2003 local elections, the Democrats ran in 46 municipalities and boroughs,[19] and won 0.3% of the nationwide vote in the county elections. It won two representatives in the Kristiansand municipal council, and one in the Vest-Agder county council.[20] In 2005, the Democrats became represented in the Bergen city council due to the defection of a Progress Party councillor.[21]

The party stepped up its activity with the aim of gaining a foothold in the Norwegian Parliament at the 2005 parliamentary election. Before the election, party leader Vidar Kleppe tried to profile the party by calling for the closure of all Mosques in Norway if they didn't distance themselves clearly from terrorism.[22] Candidates running for the party also had to withstand threats and attacks during the electoral campaign. This included Nordland county leader Amund Garfors receiving death threats,[23] and party leader Vidar Kleppe being physically assaulted both by a former Workers' Communist Party deputy leader,[24] and by members of a demonstration by left-wing organisations SOS Rasisme, the Blitz-movement and Socialist Youth.[25][26] Despite running a high profile campaign, the Democrats failed to make any breakthrough in the election, as it only captured 0.1% of the vote.

The Democrats increased their number of candidates for the 2007 local elections, and ran in 85 municipalities and boroughs, as well as in all 19 counties.[19] The party won 0.3% of the overall vote in the county elections, and kept its representation in the Vest-Agder county council. It gained eight municipal councillors, among them in the cities Trondheim and Kristiansand.[27] For the 2009 parliamentary election the Democrats for the first time ran in all the counties in Norway.[28] The Democrats complained about the Norwegian Broadcasting Corporation to the OSCE, as the party along with other extraparliamentary parties that ran in all 19 counties had been denied television coverage (except the Red Party).[29] Only a few weeks before the 2009 election, the headquarters of the Democrats was broken in to, and a computer containing material planned for use in the election campaign was stolen.[30] In the election, the party remained at 0.1% of the vote.

The Democrats had to renew its public registration due to the poor 2009 election result, and chose to re-register itself as the "Democrats in Norway".[31][32][33] The party only ran in 31 municipalities for the 2011 local elections.[34] It nevertheless again won eight municipal councillors, this time in five councils (two councillors in three councils), and held its representation in the Vest-Agder county council.[6] Besides its two representatives in Kristiansand (in Vest-Agder), all of the party's municipal councillors were elected in Hordaland.[5] After the election, the party became part of local cooperations that would govern Kristiansand[35] and Stord.[36]

The main issues for the party are law and order, increased help for the elderly and disabled, and a restrictive immigration and asylum policy.[11] The principles of the Democrats is built on Christian values, and Norwegian culture and tradition. The party is sceptical towards immigration, fearing that Western liberal values such as human rights and the Christian heritage is under threat. It also seeks drastic measures against crime, and wants to increase penalties.[10] The Democrats consider the Danish People's Party[37] and the Sweden Democrats[38] to be its sister parties. Kristian Norheim, speaking on behalf of the Progress Party, has also considered that the Democrats is the Norwegian sister party to the Danish People's Party.[39]

One of the main issues by the Democrats is immigration. The party holds that mass-immigration to western countries will lead to considerable problems that are hard to solve, including considerable costs for social security payments and great increases in crime. The party considers Norway's liberal values to be under threat, if a "Muslim mass immigration" is accepted. The party wants a stricter policy towards criminal immigrants, for instance allowing for the repatriation of immigrants participating in organized and gang-crime.[41]

The party also claim that the current Norwegian refugee-policy is cynical in that it seeks to help the few refugees who can afford the journey to Norway, when there are millions of people suffering worldwide without such possibilities. The Democrats seeks to change the refugee-policy to instead helping people outside the Norwegian border. They claim that in that way the Norwegian state can afford to help much more refugees for the same amount of money that it requires to help merely one person inside Norway. They do however want to let what it calls "true refugees" to come and stay in Norway.[41]

The Democrats identifies the causes of the recent increase in serious crime in Norway, to be a result of liberal immigration policies, low penalties, and a lack of funding for the police, courts and prison system. The party wants to raise the sentence frame of first-degree murder to life imprisonment, and otherwise raise minimum sentence frames. It does not support giving penalty discounts for multiple offences, and wants instead to add up penalties for every single offence. The party wants to double sentences for second-time offenders, triple sentences for third-time offenders and so on.[42]

The party supports a continued membership of NATO and the United Nations, although it seeks to work for a reform of the latter. It also seeks to work for increased free trade, and wants to dissolve "forced" state-controlled foreign aid. It only wants to give foreign aid to countries that seek to pursue a liberal economic policy, but maintains support to countries in cases of natural disasters, war and famine. It wants to help secure Israel's borders, and wants to move the Norwegian embassy to "the country's capital, Jerusalem."[44]

As of the 2011 local elections, the party's representation in public office include;[6]