Tadashige Daigo
In this Japanese name, the family name is "Daigo".

Born in Chiyoda, Tokyo into a kuge family of court nobility related to the Fujiwara aristocracy, Daigo was a graduate of the Gakushuin Peers' school. He went on to graduate from the 40th class of the Imperial Japanese Naval Academy in 1912. His rank on entering was only 126th out of 150 cadets, but he improved his scores, so that he graduated at 17th out of 144.[2]

Daigo served as a midshipman on the cruiser Azuma and battleship Shikishima. As an ensign, he was assigned to the cruiser Tokiwa.

After his promotion to sub-lieutenant in 1913, he took time out to attend a session of the House of Peers as was obligatory for members of his social class. He then returned to active service on the battleship Kongō and destroyer Urakaze.

Daigo was promoted to lieutenant in 1918, and after taking courses in torpedo warfare, was assigned to submarines, serving on lieutenant commander in 1924, he was captain of rear admiral on 15 November 1940.

Daigo commanded Submarine Squadron 5 (Subron 5), with hisa flag on the light cruiser Yura at the start of the Pacific War. At the time of the attack on Pearl Harbor, Subron 5 was covering the first wave of the Malaya Invasion Force south of the Cape of Camau, French Indochina.

On 9 December 1941, Subron 5 was ordered to pursue and sink the Royal Navy Force Z (battleship HMS Prince of Wales, battlecruiser Repulse and supporting destroyers). Although Yura received word from torpedo bombers of the 22nd Air Flotilla from bases in Indochina before Yura and her submarines could take action.

Subron 5 was then assigned to the invasion of Sarawak from 13–26 December, covering landings in Brunei, Miri, Seria, and Kuching. The 2,500 men of the "Kawaguchi Detachment" and the No. 2 Yokosuka Special Naval Landing Force (SNLF) quickly captured Miri's airfield and oil fields. The operation was completed, and Yura returned to its base at Camranh Bay, Indochina by the end of the year.

Subron 5 was also part of the advance screening force for the Battle of Midway.

Daigo became vice admiral on 1 November 1943. He was assigned command of the Eastern Attack Group which carried out midget submarine and merchant shipping attacks on the east coast of Australia.[3] 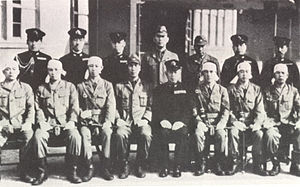 Vice Admiral Tadashige Daigo, seated in uniform, with members of his staff and kaiten pilots (with bandanas) of I-36

Daigo was Commandant of the Naval Submarine School from 23 August 1944 and final Commander in Chief of the IJN 6th Fleet from 1 May 1945. During these assignments, he was involved in the kaiten human-torpedo program.

After the end of the war, Daigo was arrested by SCAP authorities at the request of the Netherlands government, and was extradited to Batavia in the Dutch East Indies, where he was charged with war crimes in connection with the kidnapping, torture and massacre of 21,000 people (including women and children) by Japanese troops in Pontianak. After being held for several months under severe conditions, he was found guilty in a closed military tribunal at Pontianak after only three hours of testimony, during which time he was not allowed to speak in his own defense, and was executed with a rifle shot to the stomach on 6 December 1947. As Daigo was commander of submarine forces, (although from 8 November 1943 the 22nd Special Guard Division based at Balikpapan, Borneo fell nominally under his command), his connection (if any) with the events in Pontianak from 23 April 1943–28 June 1944 remain very unclear. Whereas other "Class B" war criminals found guilty of professional negligence for atrocities committed by junior staff under their nominal command were sentenced to several years in prison,[4] the speed and secrecy surrounding his trial, and the severity and brutality of his punishment, have created questions which remain unanswered.