The Cross River gorilla (Gorilla gorilla diehli) is a subspecies of the western gorilla (Gorilla gorilla) that can be found on the border between Nigeria and Cameroon, in both tropical and subtropical moist broadleaf forests which are also home to the Nigeria-Cameroon Chimpanzee, another subspecies of great ape. While all Western Gorillas are Critically Endangered (in the case of the western lowland gorilla due in part to Ebola virus), the Cross River gorilla is the most endangered of the African apes, and is one of the world's 25 most endangered primates according to the IUCN Primate Specialist Group.[2]

Estimates on the number of Cross River gorillas remaining is about 280 in the wild, concentrated in approximately 11 locations. Recent genetic research[4] and field surveys suggest that these locations are linked by the occasional migration of individual gorillas. The nearest population of western lowland gorilla is some 250 km away. Both loss of habitat and intense hunting for bushmeat have contributed to the decline of this subspecies. A conservation plan for the Cross River gorilla was published in 2007 and outlines the most important actions necessary to preserve this subspecies.[5] Richard Black of the BBC has reported[6] that the government of Cameroon has created the Takamanda National Park on the border with Nigeria, as an attempt to protect these gorillas. The park now forms part of an important trans-boundary protected area with Nigeria’s Cross River National Park, safeguarding an estimated 115 gorillas—a third of the Cross River gorilla population—along with other rare species.[7] The hope is that the gorillas should be able to move between the Takamanda reserve in Cameroon over the border to Nigeria's Cross River National Park.

In 2009, the camera-shy Cross River gorilla was finally captured on professional video on a forested mountain in Cameroon.[8]

A study published in 2007 in the American Journal of Primatology announced the discovery of the fighting back against possible threats from humans.[9] They "found several instances of gorillas throwing sticks and clumps of grass".[10] This is unusual, because gorillas usually flee and rarely charge when encountered by humans. 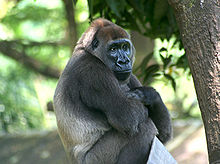