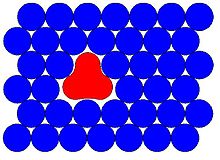 Matrix isolation is an experimental technique used in chemistry and physics which generally involves a material being trapped within an unreactive matrix. A host matrix is a continuous solid phase in which guest particles (atoms, molecules, ions, etc.) are embedded. The guest is said to be isolated within the host matrix. Initially the term matrix-isolation was used to describe the placing of a chemical species in any unreactive material, often polymers or resins, but more recently has referred specifically to gases in low-temperature solids. A typical matrix isolation experiment involves a guest sample being diluted in the gas phase with the host material, usually a noble gas or nitrogen. This mixture is then deposited on a cold window, often cooled to 10 kelvins or below. The sample may then be studied using various spectroscopic procedures.

The transparent window, on to which the sample is deposited, is usually cooled using a compressed helium or similar refrigerant. Experiments must be performed under a high vacuum to prevent contaminates from unwanted gases freezing to the cold window. Lower temperatures are preferred, due to the improved rigidity and “glassiness” of the matrix material. Noble gases such as argon are used not just because of their unreactivity but also because of their broad optical transparency in the solid state. Mono-atomic gases have relatively simple face-centered cubic (fcc) crystal structure, which can make interpretations of the site occupancy and crystal-field splitting of the guest easier. In some cases a reactive material, for example, methane, hydrogen or ammonia, may be used as the host material so that the reaction of the host with the guest species may be studied.

Using the matrix isolation technique, short-lived, highly-reactive species such as radical ions and reaction intermediates may be observed and identified by spectroscopic means. For example, the solid noble gas krypton can be used to form an inert matrix within which a reactive F3- ion can sit in chemical isolation.[1] A species may be created chemically before deposition, or after by photochemical means. The technique may be used to simulate a species in the gas phase without rotational and translational interference. The low temperatures also help to produce simpler spectra, since only the lower electronic and vibrational quantum states are populated.

Matrix isolation has its origins in the first half of the 20th century with the experiments by photo-chemists and physicists freezing samples in liquefied gases. The earliest isolation experiments involved the freezing of species in transparent, low temperature organic glasses. The modern matrix isolation technique was developed extensively during the 1950s, in particular by George C. Pimentel. He initially used higher-boiling inert gases like xenon and nitrogen as the host material, and is often said to be the "father of matrix isolation".