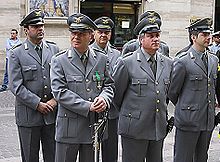 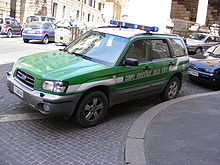 It was established on 15 October 1822 by Charles Felix of Sardinia as "Amministrazione forestale per la custodia e la vigilanza dei boschi".

An agency under the jurisdiction of the Ministry of Agriculture, Food and Forestry, the CFS acts as a park ranger force responsible for protecting Italy's natural resources, the environment, countryside and ecosystems, especially national parks and national forests. Its duties include arresting poachers, investigating environmental violations, safeguarding protected animal species, enforcing endangered species laws, and preventing and fighting wildfires through 15 regional commands and its fleet of 22 fire-fighting aircraft. The CFS is also responsible for civil protection in Italy's mountain areas and for disaster relief.

The CFS's emergency telephone number for reporting forest fires is 1515.

In Italy it has responsibility for managing activities related to the Convention on International Trade in Endangered Species (CITES).

The CFS's vehicle livery is green with a white stripe and the words Corpo Forestale dello Stato in white along the side. The vehicle plates begin with the letters "CFS" in red.