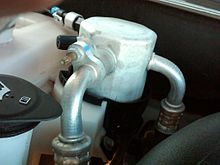 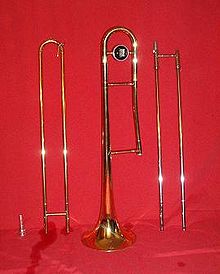 Shown is a trombone, it displays some U-bends

Tube bending is the umbrella term for metal forming processes used to permanently form pipes or tubing. One has to differentiate between form-bound and freeform-bending procedures, as well as between heat supported and cold forming procedures.

Form bound bending procedures like “press bending” or “rotary draw bending” are used to form the work piece into the shape of a die. Straight tube stock can be formed using a bending machine to create a variety of single or multiple bends and to shape the piece into the desired form. This processes can be used to form complex shapes out of different types of ductile metal tubing.[1] Freeform-bending processes, like three-roll-pushbending, shape the workpiece kinematically, thus the bending contour is not dependent on the tool geometry.

Generally, round stock is what is used in tube bending. However, square and rectangular tubes and pipes may also be bent to meet job specifications. Other factors involved in the tube bending process is the wall thickness, tooling and lubricants needed by the pipe and tube bender to best shape the material.

A tube can be bent in multiple directions and angles. Common simple bends consist of forming elbows, which are bends that range from 2 to 90°, and U-bends, which are 180° bends. More complex geometries include multiple two-dimensional (2D) bends and three-dimensional (3D) bends. A 2D tube has the openings on the same plane; a 3D has openings on different planes.

One side effect of bending the workpiece is the wall thickness changes; the wall along the inner radius of the tube becomes thicker and the outer wall becomes thinner. To overcome this the tube may be supported internally or externally to preserve the cross section. Depending on the bend angle, wall thickness, and bending process the inside of the wall may wrinkle.

Tube bending as a process starts with loading a tube into a pipe bender and clamping it into place between two dies, the clamping block and the forming die. The tube is also loosely held by two other dies, the wiper die and the pressure die.

The process of tube bending involves using mechanical force to push stock material pipe or tubing against a die, forcing the pipe or tube to conform to the shape of the die. Often, stock tubing is held firmly in place while the end is rotated and rolled around the die. Other forms of processing including pushing stock through rollers that bend it into a simple curve.[2] For some tube bending processing, a mandrel is placed inside the tube to prevent collapsing. The tube is also held in tension by a wiper die to prevent any creasing during stress. A wiper die is usually made of a softer alloy i.e. aluminum, brass to avoid scratching or damaging the material being bent.

Much of the tooling is made of hardened steel or tooled steel to maintain and prolong the tools life. However wherever there is a concern of scratching or gouging the work piece, a softer material such as aluminum or bronze is utilized. For example, the clamping block, rotating form block and pressure die are often formed from the hardened steel because the tubing is not moving past these parts of the machine. On the other hand, the pressure die and the wiping die are formed from aluminum or bronze to maintain the shape and surface of the workpiece as it slides by.

Rotary draw bending (RDB) are precise in that they bend using tooling or "die sets" which have a constant center line radius (CLR). The die set consists of two parts: The former die creates the shape to which the material will be bent. The counter die does the work of pushing the material into the former die while traveling the length of the bend. Rotary draw benders can be programmable to store multiple bend jobs with varying degrees of bending. Often a positioning index table (IDX) is attached to the bender allowing the operator to reproduce complex bends which can have multiple bends and differing planes.

Rotary draw benders are the most popular machines for use in bending tube, pipe and solids for applications like: handrails, frames, motor vehicle roll cages, handles, lines and much more. Rotary draw benders create aesthetically pleasing bends when the right tooling is matched to the application.

The Three-Roll Pushbending (TRPB) is the most commonly used freeform-bending process to manufacture bending geometries consisting of several plain bending curves. Nevertheless, a 3D-shaping is possible. The profile is guided between bending-roll and supporting-roll(s), while being pushed through the tools. The position of the forming-roll defines the bending radius. The bending point is the tangent-point between tube and bending-roll. To change the bending plane, the pusher rotates the tube around its longitudinal axis. Generally, a TRPB tool kit can be applied on a conventional rotary draw bending machine.

Bending contours defined as spline- or polynomial-functions can be manufactured.[3]

An induction coil is placed around a small section of the pipe at the bend point. It is then heated to between 800 and 2,200 degrees Fahrenheit (430 and 1,200 °C). While the pipe is hot, pressure is placed on the pipe to bend it. The pipe is then quenched with either air or water spray. Heat-Induction bending is used on large pipes such as freeway signs, power plants, and petroleum pipe lines.

During the roll bending process the pipe, extrusion, or solid is passed through a series of rollers (typically 3) that apply pressure to the pipe gradually changing the bend radius in the pipe. The pyramid style roll benders have one moving roll, usually the top roll. Double pinch type roll benders have two adjustable rolls, usually the bottom rolls, and a fixed top roll. This method of bending causes very little deformation in the cross section of the pipe. This process is suited to producing coils of pipe as well as long gentle bends like those used in truss systems.

A mandrel is a steel rod or linked ball inserted into the tube while it is being bent to give the tube extra support to reduce wrinkling and breaking the tube during this process. The different types of mandrels are as follows.

In production of a product where the bend is not critical a plug mandrel can be used. A form type tapers the end of the mandrel to provide more support in the bend of the tube. When precise bending is needed a ball mandrel (or ball mandrel with steel cable) should be used. The conjoined ball-like disks are inserted into the tubing to allow for bending while maintaining the same diameter throughout. Other styles include using sand, cerrobend, or frozen water. These allow for a somewhat constant diameter while providing an inexpensive alternative to the aforementioned styles.

Performance automotive or motorcycle exhaust pipe is a common application for a mandrel.

These are strong but flexible springs inserted into a pipe to support the pipe walls during manual bending. They have diameters only slightly less than the internal diameter of the pipe to be bent. They are only suitable for bending 15-and-22 mm (0.6-and-0.9 in) soft copper pipe (typically used in household plumbing).

The spring is pushed into the pipe until its center is roughly where the bend is to be. A length of flexible wire can be attached to the end of the spring to facilitate its removal. The pipe is generally held against the flexed knee, and the ends of the pipe are pulled up to create the bend. To make it easier to retrieve the spring from the pipe, it is a good idea to bend the pipe slightly more than required, and then slacken it off a little. They are less cumbersome than rotary benders, but are not suitable for bending short lengths of piping when it is difficult to get the required leverage on the pipe ends.

Bending springs for smaller diameter pipes (10 mm copper pipe) slide over the pipe instead of inside.