This person should not be confused with Pedro de Aranda, bishop of Calahorra during the late fifteenth century. 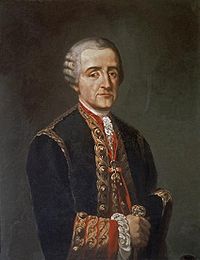 Portrait of the Count of Aranda, by José María Galván.

He began ecclesiastical studies in the seminary of Bologna but when he was 18 he changed to the Military School of Parma. In 1740, he was captain in the Spanish Army and fought in the War of Austrian Succession. As he had been severely wounded in combat in 1743 (he was left for dead on the battlefield), he temporarily left the military and traveled through Europe. He studied the Prussian Army and lived in Paris, where he met Diderot, Voltaire and D'Alambert and studied the Encyclopedical and Enlightenment movements.

In 1754, Ferdinand VI appointed him ambassador to Portugal and in 1757 director general of Artillery. In 1760, Charles III appointed him ambassador to Poland and on his return he was sent to Portugal to supersede the Marquis of Sarria in the command of the Spanish army then invading Portugal. Hisr forces managed to capture the key border town of Almeida but were then forced to retreat following the intervention of British troops led by John Burgoyne at the Battle of Valencia de Alcántara and the war was brought to an end shortly afterwards by the Treaty of Paris. 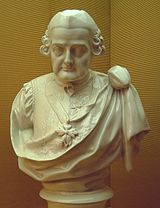 In 1763 he was appointed captain general of Valencia. When the Esquilache riots happened he was appointed captain general of Castile the New and president of the Council of Castile. As he enjoyed the personal confidence of the king, his power was similar to a prime minister's. He promoted many enlightened reforms and he supported the expulsion of the Jesuits in 1767. His political and courtier enemies, especially Floridablanca, managed to achieve his dismissal. He was appointed ambassador to France in 1773, where he stayed till 1787.[1]

In Paris, analyzing the situation created after the United States won its independence, he drafted a projected Commonwealth for the Spanish Empire: three independent kingdoms (Peru, Tierra Firme (New Grenada and Venezuela) and Mexico) with three Spanish infantes in their thrones. The Spanish king would remain as the Spanish Emperor.[2] 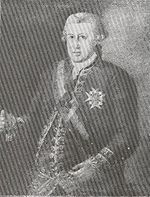 Portrait of Aranda by Goya.

In 1792, he returned to Spain to replace the Count of Floridablanca as secretary of State (Prime minister). After the imprisonment of Louis XVI (August, 1792) and the proclamation of the Republic in France (September), Aranda's Enlightenment leanings seemed incompatible with the total war that several European monarchies were about to declare against revolutionary France. Aranda was therefore replaced by Manuel Godoy in November. After the defeat of Spanish Army in Roussillon, Godoy and Aranda publicly quarreled in the Council of State. That same night Aranda was arrested and confined to Jaén. A year later he was indulted and retired to his estates in Aragon.

He was buried in the monastery of San Juan de la Peña.