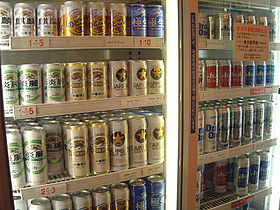 Beer in Japan had its start in the 17th century during the Edo Period when the Dutch opened a beer hall for sailors working the trade route between Japan and the Dutch Empire. Japanese-style commercial brewing has been exported to much of southeast Asia and factories are spread throughout the world.

Beer is the most popular alcoholic drink in Japan, accounting for nearly two thirds of the 9 billion liters of alcohol consumed in 2006.[1] During the late 19th century (the start of the Japanese Meiji period) brewers from Germany arrived.

Major makers are Asahi, Kirin, Sapporo and Suntory while small local breweries supply distinct tasting beers. Lager beers are most common but beers made with lower grain contents called "Happoushu" (発泡酒, low malt beer, literally sparkling alcoholic drink) have captured a large part of the market as tax is lower on these products.

Due to the Japanese taxation system, the varieties of brewed malt beverages in Japan are categorized into two groupings: beer and happoshu. The distinction is made based on the amount of malt used relative to grain adjuncts, with the term happoshu ascribed to low-malt brews. Japanese regulations forbid the use of the word beer or Bīru (ビール ) in katakana to describe brews containing less than 67% malt (thus allowing up to 33% adjuncts including rice, corn, sorghum, potato, starch, and sugar).[2][3]

Many restaurants and drinking establishments only serve the officially recognized beers. Many imported beers in Japan are labeled happoshu if the malt content is too low.

Since 2004, Japanese breweries have produced even lower taxed, non-malt brews made from soybeans and other ingredients which do not fit the classifications for beer or happoshu. Dubbed the third beer or third-category beers or Happousei (発泡性, literally type of Happou; this is what is usually written on the can, either this or "Liqueur" (リキュール) Incidentally, liqueur also refers to what we would commonly think of as a liqueur as well as the Chuhai drink) by the Japanese media (dai-san no biru)[1], they are officially classified as "Other miscellaneous alcohol" or "Liqueur". 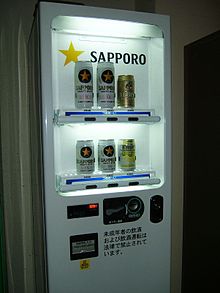 In Japan, beer can be sold in vending machines. Some vending machines have motion activated advertising that displays on small TV screens embedded into them. They play beer commercials and jingles that are seen on TV and heard on the radio. These vending machines began be phased out in June 2000, mainly over the concerns of underage drinking.[citation needed]

Japan has liberal laws in regards with the selling and consumption of alcohol. Beer can be purchased at a wide variety of outlets, including supermarkets, convenience stores and kiosks at train stations and can be consumed virtually anywhere. However, Japan has very strict laws against operating a motor vehicle or riding a bicycle after or during the consumption of alcohol.

Many breweries in Japan offer seasonal beers, which are produced only during one of the four seasons. In autumn, for instance, "autumn beers" are brewed with a higher alcohol content, typically 6% as opposed to the common 5% of Asahi Super Dry. For example, Kirin's Akiaji beer. The beer cans are typically decorated with pictures of autumn leaves, and the beers are advertised as being suitable for drinking with nabemono (one-pot cooking). Similarly in winter, beers such as fuyumonogatari (translated as "The Winter's Tale" on the can) appear.[citation needed]

In the UK, in the late 1990s, beer branded as being Kirin Lager Beer from the Japanese brewery Kirin was put on sale. However, the beer was in fact entirely produced in the UK, and the alcohol content of 4% was different from the original Japanese level of 5%.[citation needed]

In the US, three of the four major Japanese brands are available. These include Sapporo Draft, Kirin Ichiban (Number One, as opposed to the normal Lager which is not available), and Asahi Super Dry. Asahi is produced by Molson in Canada[4], Kirin is produced at an Anheuser-Busch facility in Los Angeles, and Sapporo is produced at a Sapporo-owned brewery in Guelph, Ontario, Canada. Suntory beer is not available. Orion Beer is also available, imported from Okinawa Prefecture. Availability of brands depends on an individual state's liquor laws, resulting in some beers being available in some places and others not. For example, in Oklahoma, Asahi Super Dry, Sapporo, and Orion are available, whereas in Texas, Kirin Ichiban is prevalent.

Kiuchi brewery was the first Japanese microbrewery to export beer from Japan. While some other microbreweries now export marginal amounts, approximately 60% of Kiuchi's sales are overseas and it remains the largest exporter.[citation needed]

The Dry Senso or ドライ戦争 (どらいせんそう, dorai sensō) meaning Dry Wars, was a period of intense competition between Japanese brewery companies over dry beer. It began in 1987 with the launch of Asahi Super Dry by Asahi Breweries which led to the introduction of dry beer by other breweries.

The Kirin Brewery Company, which held 50% share of the Japanese domestic beer market, launched Kirin Dry in February 1988 in an advertising campaign featuring actor Gene Hackman, and in April of the same year launched the all-malt Kirin Malt Dry. However, they were unable to stop Asahi’s momentum. In 1990 Kirin launched Ichiban Shibori in direct competition with Asahi Super Dry, but ended up cannibalising profits on their own Kirin Lager Beer brand. Kirin never ended up regaining its 50% market share.

Suntory launched their Malts brand in February 1988 in an "I don't do dry" campaign, while at the same time launching Suntory Dry, later rebranded to Suntory Dry 5.5 in an advertising campaign featuring boxer Mike Tyson after increasing the alcohol content from 5% to 5.5%. This achieved reasonable results, although not enough to slow down demand of Asahi Super Dry.

The end result was victory to Asahi Super Dry. The other companies later set their sights on low malt beer and cheap malt-free beer known as "third beer".

The Dry Wars were criticised in an episode of the manga Oishinbo (the Gourmet), published at around the time of the saga.

In 1994, Japan's strict tax laws were relaxed allowing smaller breweries producing 60,000 litres (15,850 gal) per year. Before this change, breweries could not get a license without producing at least 2 million litres (528,000 gal) per year. As a result, a number of smaller breweries have been established throughout Japan. Although it is technically illegal to produce beverages containing more than 1% alcohol without a license, the law is rarely adhered to for homebrewers and homebrewing supplies are available from high street store Tokyu Hands and various websites.

The Japanese word for microbrew is Ji Bīru(地ビール), or "local beer," though Japanese microbrew industry professionals are increasingly using the word "craft beer" (kurafuto bia) in their labels and marketing literature. There are currently over 200 microbreweries in Japan making Ji Bīru of various styles including ale, stout, pilsener, weizen, Kölsch, and others. After the relaxation of the Liquor Tax Law there was a boom in microbrewing, but it has gradually leveled off. One problem was the rising popularity of low cost happoshu (low malt beer), compared to the high cost microbrews, which forced some early microbreweries out of business. In Japan, the dominance of the majors and the relative high cost and low volume involved in producing micros led to their only being known to a small number of beer enthusiasts. The higher price of microbrews, the shorter shelf-life, and lower production volume, compared to the national major brewers, have all combined to make things very difficult for many small breweries. However, thanks to factors such as special licensed production for some bar and restaurant chains and cooperation between micro breweries, the industry has managed to maintain itself. There are a growing number of regional microbrew festivals held throughout Japan, including the annual Tokyo Real Ale Festival and the Great Japan Beer Festival held annually in Tokyo, Osaka and Yokohama.[5] Every year the Japan Craft Beer Association holds the Japan Beer Cup, while a competing organization, Japan Craft Beer Support, has launched the annual Japan Craft Beer Selection.

Naturally, beer features heavily in any Japanese manga or anime series where adults drink alcohol. Often, though, to avoid copyright issues the artists either leave the labels off the bottles or alter the name slightly (such as "Krin" instead of "Kirin", or "Soporo" instead of "Sapporo"). Examples of this usage are too numerous to list.