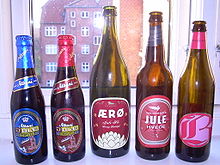 Beer in Denmark is dominated by Carlsberg and Tuborg. Since Tuborg was acquired by Carlsberg in 1970 this has left a near monopoly for Carlsberg. A number of regional breweries however managed to survive, and most of them merged to Royal Unibrew in 2005. Also in recent years a large number of micro breweries have appeared.

The Danish market is dominated by pale lager, with more than 95% of total sales. However, stout and other dark beers are increasing in popularity, a trend driven by the market growth of premium-priced beers. The local microbreweries are strong innovators and produce a wide variety of beer styles, including strong IPAs and stouts.[1]

Imported beer accounted for only 8% of total volume sales in 2006. This indicates that beer sales in Denmark are dominated by domestic brands; however, imports increased by 14% in 2006 to reach 36.3 million litres. Germany is the most important source market for imports.

Danish beer exports was 296.1 million litres in 2006. Germany continues to be the most important export market for Danish beers. The German market accounted for 30% of exports in 2006.

Based on data from the Danish Beer Association (Bryggeriforeningen), beer consumption for 2005 was 539 million litres.[2]

Danish industrialist J. C. Jacobsen revolutionized the world of brewing when his brewery, Carlsberg, bred a pure strain of lager yeast, Saccharomyces carlsbergensis. This enabled the breweries to achieve a large and consistent output, and lager has been the most popular style of beer in Denmark since Carlsberg started selling it in 1847.[3] Smaller breweries in Denmark suffered greatly under the Carlsberg market dominance, especially during the middle of the 20th century, and this led to a large reduction in available beer quality and styles. In recent years the interest in higher quality beer has risen sharply, and the Danish beer landscape is now dotted with several small breweries and brewpubs, producing a wide range of beers. 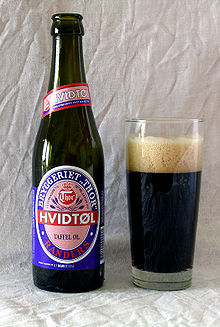 Hvidtøl (White beer) is a traditional Danish beer. It is usually under 2% abv, and quite malty and sweet. It was once the most common beer in Denmark but sales have declined so that it is mainly only bought at Christmas when it is served with rice pudding.[4] The beer was originally termed "white" as it was made from kilned malt, which was developed in the late 18th century in contrast to the malts dried over fires which produced smokey beers.[5]

Nisseøl (literally elf beer) is a dark, sweet hvidtøl (white beer) which is sold around Christmas time in Denmark. The name come from the nisser (mythical creatures of Scandinavian folklore) who are often depicted on the beer labels. It is not to be confused with julebryg, which is a much stronger Danish Christmas beer.

The most common type of beer in Denmark is pale lager, simply known as Pilsner in Danish. For instance: Carlsberg Pilsner, Grøn Tuborg, Royal Pilsner.