Free Beer
This article is about an open source beer. For other uses, see Free beer. 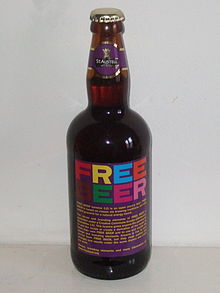 An unopened bottle of Free Beer (version 3.2, brewed by the St Austell Brewery) with a label in English

Free Beer, formerly known as Our Beer (Danish: Vores øl) is the first brand of beer with a "free" recipe - free as in "freedom", taken after the term "free software". The name "Free Beer" is a play on Richard Stallman's common explanation that free software is "free as in speech, not free as in beer."[1] The recipe is published under a Creative Commons license, specifically the Attribution-ShareAlike license.

The beer was created by students at the IT-University in Copenhagen together with Superflex, a Copenhagen-based artist collective, to illustrate how concepts of the free software movement might be applied outside the digital world.

The students brewed the first 100 litre batch instructed by Kjeld Erlandsen, titled 'version 1.0', of the dark heavy beer in the school cafeteria, and created label designs and a website to promote the beer and publish the recipe.

Almost immediately, many from the homebrewing community spoke out against the quality of the recipe, several posting to a Slashdot thread.[2] Most notable among the complaints were that it was never stated how much water to use in the mash, what type of yeast was to be used, the style of beer being produced (other than being dark and heavy), whether or not any hops were being added for aroma, fermentation temperature, or how the beer was supposed to taste. Making reference to the technical problems of when software instructions ("source code") cannot be made into a functioning program, several people have said that if this recipe were source code, it would not compile.

Rasmus Nielsen, one of the developers of the beer, has stated that the beer was a medium for the message of "dogmatic notions of copyright and intellectual property that are dominating our culture."[3] He also admitted that the group was not made up of beer gurus and that their experience in beer production was limited. Because of the underlying theme of the group's message, the correction and development of this recipe is actively encouraged.

The recipe has now reached version 4.0, and corrects most of the above mistakes. The quality of the beer also improved, since the amount of sugar in it decreased by 90%.[4] 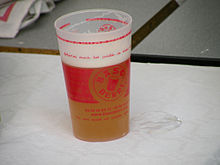 Under its free license, this free beer encourages others to tweak the recipe and redistribute it. Commercial or amateur brewers are able to reuse the recipe. Known derivatives include: