Mining in New Zealand began when the indigenous Māori quarried rock such as argillite in times prior to European colonisation.[1] Mining by Europeans began in the latter half of the 19th century.

New Zealand has abundant resources of coal, silver, iron ore, limestone and gold. It ranked 22 in the world in terms of iron ore production and 29th in gold production. The total value of mineral production in New Zealand was $1.5 billion in 2006 (excluding oil and gas). The most important metallic minerals produced are gold (10.62 tonnes), silver (27.2 tonnes) and titanomagnetite ironsand (2.15 million tonnes). A 2008 report estimated that the unexploited resources of just seven core minerals (including gold, copper, iron and molybdenum) totalled around $140 billion in worth.[2]

In 2010 it was estimated that 0.016% of New Zealand's land area, or 4000 hectares, was used by the mining industry, mostly for quarries producing mostly aggregate for roading and construction.[2]

The latter decades of the 20th century and into the 21st century saw opposition to mining on environmental grounds. The Crown Minerals Act 1991 is a major piece of legislation relating to mining, and a review of Schedule 4 of the Act provoked considerable controversy late in the first decade of the 2000s. 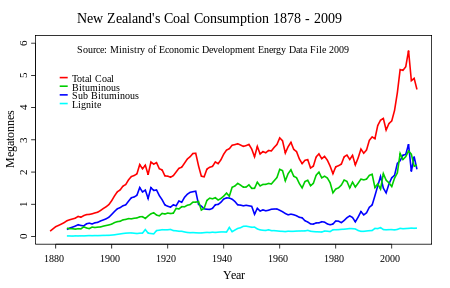 Coal mining produced 5.3 millions tonnes of coal in 2010, of which over 2 million tonnes were exported.[4] New Zealand coal reserves are in excess of 15 billion tonnes, mainly in Waikato, Taranaki, West Coast, Otago and Southland.[4] Over 80% of the reserves are in Southland lignite deposits worth $100 billion.[2] Coal is produced from four underground and 21 opencast mines.[5] The largest coal mining company is Solid Energy, a state-owned enterprise. 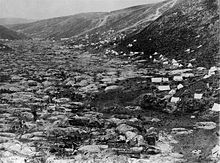 Prospectors discovered gold in the Coromandel in 1852, sparking the Otago Gold Rush and the West Coast Gold Rush in the 1860s. Gold worth $250M in 2006 was produced from two large hard-rock mines (Martha Mine and Macraes Mine), several medium sized alluvial operations, and a large number of small alluvial mines. Mining for gold has a long history in areas like the Coromandel Peninsula.

The Waikato North Head ironsand mine was reported to have produced 1.3 million tonnes of ironsand in 2008. The deposit is estimated to contain more than 150 million tonnes.

Environmental issues with mining include acid mine drainage and large scale modifications to landscapes. Acid mine drainage from coal mining is a serious problem in New Zealand. It is estimated to adversely affect 125 kilometres of streams mainly in the Buller area of the West Coast of the South Island. However, there has been very little remediation of acid mine drainage.[6]

The Tui mine in the Kaimai Range which closed in 1973 is considered one of the worst toxic waste sites in New Zealand and the government has allocated almost $10 million for cleaning up the site. Structural failure of historic underground mine workings have led to subsidence, cracking and collapse on properties in Waihi, a township that has built up around the current open pit. The Stockton Mine on the West Coast of the South Island, has historically been responsible for acid mine drainage in adjoining waterways,[7] and has since built a comprehensive water treatment plant on the Stockton plateau.[8] Stockton poses a threat to some native species, although has carried out significant biodiversity conservation work in the region, and mountaintop removal mining has happened on the site in recent years. Over a one hundred year period Mount Smart in Auckland was mined to such an extent that it is now level with the surrounding land. Several other Auckland volcanoes have suffered a similar fate.

Carbon Capture and Storage (CCS) is attracting funding in the billions of dollars as part of global efforts to address greenhouse gas emissions.[9] CCS may well have a vital role to play in the portfolio of technologies to be deployed. The New Zealand Government and industry are working with Australia on research to support commercial-scale CCS.[10] However, in the New Zealand context, University of Canterbury researchers authored a 2009 paper on CCS published in the peer-reviewed journal Energy Policy. The paper considered the permanence of CO2 storage was uncertain and that CCS was unlikely to significantly reduce carbon emissions. The paper concluded that further investment in CCS was seriously questionable as a policy.[11]

Coal Seam Gas (CSG) is a form of natural gas occurring naturally in deep coal seams that could potentially add to New Zealand’s gas supply.[12] Solid Energy New Zealand has been trialling CSG extraction at the Waikato coal fields, for use in electricity generation.[13]

Deep-sea metallic mineral deposits in the Kermadec volcanic arc are attracting research into how they are formed and how they influence the surrounding undersea biodiversity.[14] Mineral-rich fluids coming out of seafloor hot springs contact cold sea water and precipitate out high-grade ore deposits containing gold, copper, lead, zinc, iron, manganese and other metals. In one sense, these are renewable resources because they are constantly being formed. Discovering these deposits is one matter; mining them in an economic and environmentally appropriate way is another. Extraction of these resources is viewed as a long-term prospect. A proposal for the protection of part of the Kermadec volcanoes is being developed by the Pew Environmental Group.[15]

Geothermal energy is experiencing a renaissance in New Zealand. This renewable source of energy could contribute to 20% of New Zealand’s electricity needs after the next decade.[16] Current research led by the GNS Science and the University of Auckland is tipped to enable cheaper geothermal energy, and identify new systems in the Central North Island for development.

Ironsands offshore of New Zealand from Northland south to Whanganui, and off the South Island’s West Coast is estimated to hold some billions of tonnes of titanomagnetite resource.[17] Titanium and vanadium are the main by-products. The resource is in the stage of being prospected and explored, and assessed for its economic potential.

Low-temperature geothermal energy can be used potentially for space heating, hot pools, heat pumps in the home, heating greenhouses and aquaculture. The heat may be sourced from hot spring systems, disused petroleum wells, heated waters in flooded underground coal and mineral mines, heat in underground aquifers, and heat in rocks. Research in this field in New Zealand is led by GNS Science.[18]

Methane hydrates (fire ice) are a crystalline form of methane trapped in water, occurring in deep-water continental shelf sediments in many parts of the world, including New Zealand.[19] This resource may furnish a future source of natural gas. Work is underway in New Zealand to determine economically viable deposits, and technologies for safe extraction.[20] In New Zealand, methane hydrates are found in shallower waters than elsewhere in the world.

Underground coal gasification (UCG) is a way of accessing energy from coal deposits that lie too deep underground or are too dangerous to be mined or are otherwise uneconomic. Air, oxygen or steam is injected at high temperatures, to burn the coal underground. Separate wells are drilled to capture the resulting “coal gas” which is in essence a form of natural gas. When combined with CCS, this offers a low-emissions route to generating electricity from coal.[21] 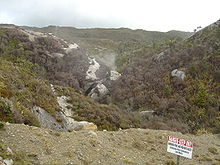 A burning coal mine near Denniston

The Coromandel Watchdog lobby group has been active in lobbying against gold mining on the Coromandel Peninsula since the 1970s. It has recently begun to work against proposals to restart mining in some areas of the Coromandel which have been off-limits to mining for a long time, and has argued that any claim of "surgical" mining operations being possible is farcical, when one realises that even for such mining, roads would have to be built into the areas, ore processing plants constructed, as well as tailings and chemical byproducts of the ore separation process disposed off.[2]

Sand mining from both beaches and the seabed has encountered opposition. Kiwis Against Seabed Mining,[22] an environmental lobby group, formed when plans were revealed for the mining of the seabed off the West Coast of the North Island.

There are numerous coal mines on the West Coast of the South Island. The Cypress Mine, planned for the Westport area, is opposed by the Save Happy Valley Coalition due to effects on landscape values, biodiversity and climate change.

A speech by the Minister for Economic Development Gerry Brownlee to the Australasian Institute of Mining and Metallurgy in August 2009[23] provoked a reaction from environmental groups. In the speech Brownlee announced a review of Schedule 4 of the Crown Minerals Act. The Schedule lists conservation land such as national parks and reserves as off-limits to mining.

Advocacy for the NZ resource sector

In 2008 a number of mainly gold and coal producing companies in New Zealand set up Straterra, an incorporated society, to provide a collective voice for the NZ resource sector.[24] Staterra's members and affiliates represent 88% of the value of NZ production of all minerals, except oil & gas and geothermal resources. Straterra also works closely with the petroleum sector and has links to the geothermal sector. Straterra participates in government policy processes, carries out government and industry relations, and provides advocacy for the NZ resource sector including via the media.

A key focus for the NZ resource sector is to promote mature, well-informed debate on mineral and energy issues.[25] Straterra believes that properly managed and encouraged the NZ resource sector can make a significant contribution to the New Zealand economy, and can be managed in environmentally responsible ways, with the passing of the Resource Management Act and the Crown Minerals Act in 1991.

The largest-scale accidents are: