Coaches of the London and North Eastern Railway

Coaches of the London and North Eastern Railway

The London and North Eastern Railway (LNER) inherited several styles of coaching stock from its constituents. Sir Nigel Gresley continued the styles that he had established pre-grouping at the Great Northern Railway (GNR) and for the East Coast Joint Stock.

Various types of coaches were inherited from pre-grouping companies.

Two GNSR six-wheel coaches of c.1896 are preserved on the Strathspey Railway. The GNSR Royal Saloon of 1898 is preserved by the Scottish Railway Preservation Society at Falkirk.[1]

Coaches built by the LNER

The 'Quadart' set at Sheringham Station on the North Norfolk Railway

Gresley first introduced articulation in passenger stock in 1907 using converted vehicles, but in 1911 he produced some articulated suburban stock for the GNR. These were articulated pairs and were later rebuilt as four-coach ('Quadart') units. From 1921–9 further 'Quadart' compartment stock was built with an eventual total of 97 GNR and LNER sets.

Two 'Quadarts' formed an eight-coach train. Because of their high seating capacity they were popular with the operators and some continued in traffic until April 1966. One set is preserved on the Midland and Great Northern Joint Railway at Sheringham.[1]

The standard LNER corridor coach design was finalised in 1923, using a 60 ft underframe, though some for use on the Great Eastern were on 51 ft underframes. The LNER standard coach was in advance of those of the other three of the Big Four by virtue of the Pullman gangways and buckeye couplers. The wooden teak-panelled body with squared mouldings and windows was more traditional than modern, particularly as the LNER persisted with this construction until 1942. In fact, there were few differences in design over the 1923-42 period, apart from an increase in body width to 9 ft 3in after 1927. All these standard coaches were mounted on Gresley double-bolster 8 ft 6in bogies. The general service stock was withdrawn by 1965. Several examples are preserved. 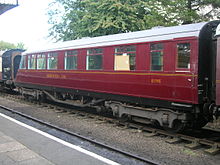 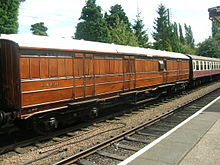 In 1937, the LNER built two observation coaches at Doncaster Works for use on The Coronation express passenger train during the summer months. Looking quite different to the teak coaches, they in many respects resembled the LNER Class A4 locomotives that hauled the train. The carriages had a conventional corridor connection at one end and a deeply glazed tapered end at the other, so many enthusiast referred to them as Beavertails. Both were fitted out with Art-deco styling and a luxury bar/lounge combination.

During the Second World War both were put in store and, in 1959, E1719E was rebuilt by British Railways with larger panoramic windows for West Highland Line specials. The other coach, numbered E1729E, went into a long period of storage at Steamtown, Carnforth. Both coaches survive today in the hands of Railway Vehicle Preservations Ltd on the preserved Great Central Railway, Loughborough, where they allow first class ticket holders to travel in restored E1719E. After many negotiations E1729E is now at Barrow Hill, undergoing restoration into its as-built condition, with completion planned for 2012.

Pigeon vans (British Rail TOPS classification: BGP) were fairly common rail vehicles on the LNER, which built dozens in the late 1930s and early 1940s. Although designed for transporting racing pigeons to release locations, with very little modification they could also carry mail or other freight. The first batch was made of teak wood, treated with varnish, but the economic climate of World War II meant that many batches were built with steel bodies to the same basic design.

One steel-built van has been preserved, as have at least 14 of the teak coaches. Many have been restored and used on heritage railways as guard's vans on passenger trains and mail drop recreations.