Coaches of the Great Western Railway

Coaches of the Great Western Railway

The passenger coaches of the Great Western Railway (GWR) were many and varied, ranging from four and six-wheeled vehicles for the original broad gauge line of 1838, through to bogie coaches up to 70 feet (21 m) long which were in service through to 1947. Vacuum brakes, bogies and through-corridors all came into use during the nineteenth century, and in 1900 the first electrically lit coaches were put into service. The 1920s saw some vehicles fitted with automatic couplings and steel bodies.

Early vehicles were built by a number of independent companies, but in 1844 the railway started to build carriages at Swindon railway works, which eventually provided most of the railway’s stock. Special vehicles included sleeping cars, restaurant cars and slip coaches. Passengers were also carried in railmotors, autotrains, and diesel railcars. Passenger-rated vans carried parcels, horses, and milk and at express speeds.

Most coaches were painted in a chocolate brown and cream livery, although this did change over the years, however they were plain brown or red until 1864 and from 1908 to 1922. Parcels vans and similar vehicles were seldom painted in the two-colour livery, being plain brown or red instead, which caused them to be known as "brown vehicles". 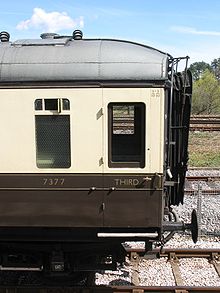 The distinctive roof profile of a Hawksworth-designed coach

Early GWR carriages, in common with other railways at the time, were typically wooden vehicles based on stagecoach practice and built on short, rigid six-wheel (or sometimes four-wheel) underframes, although the 7 ft 0 1⁄4 in (2,140 mm) broad gauge allowed wider bodies with more people seated in each compartment. Three classes were provided, although third class carriages were not conveyed in every train and, for the first few years, were little more than open trucks with rudimentary seats. Some rigid eight-wheeled carriages were produced but vacuum brakes and bogies made an appearance before the end of the broad gauge in 1892.[1]

The first train in the United Kingdom with corridor connections between all carriages entered service on 7 March 1890 on the Paddington to Birkenhead route, and further corridor trains were introduced on all the main routes over the next few years. In 1900 a new Milford Boat Train set introduced electric lights and the communication cord was moved inside the train; until now a passenger needing to stop the train in an emergency had to lean out of the window and pull a cord above the door. At this time carriages generally had a clerestory roof but elliptical roofs were fitted to the GWR steam rail motors in 1903 and then became standard for all carriages, the first being the "Dreadnought" stock built from 1904 in lengths of up to 70 feet (21 m). At this time most carriages on railways in Great Britain were a maximum of 57 feet (17 m).[2] The "Concertina" stock appeared in 1906, so named as the doors were recessed into the body side rather than flush with the outer panels. The following year saw the introduction of shorter "Toplight" stock of around 57 ft, the toplights being small "lights" or windows above the main windows. Coaches panelled in steel rather than wood first appeared in 1912.[2]

The next significant change came in 1922 when bow-ended stock was introduced in both 57 ft and 70 ft lengths. Hitherto coaches had featured flat ends but bow ends were easier to fit with Buckeye couplings that were then finding favour with passenger trains in the United Kingdom. These coaches were generally more plain than earlier vehicles as they had flush sides without beaded panels. Some articulated sets were built in 1925. From 1929 coaches had windows flush with the body panels, the first such sets being for the Cornish Riviera Express but general service coaches followed the following year, including the infamous "B Sets", two-coach trains mainly used on branch lines.[2]

A third class open coach built for excursion trains in 1937

In 1931 some "Super Saloons" were built, also known as "Ocean Saloons" as they were used on the Plymouth to London Ocean Mail trains. These were fitted out to very high specification for the Trans-Atlantic passengers. In 1935 excursion stock with open saloons instead of compartments was introduced, and the "Centenary" stock for the Cornish Riviera Limited service. During World War II some "Special Saloons" were built for the use of VIPs and for the Royal Train. A distinctive new profile appeared in 1944, when Hawksworth introduced corridor coaches with domed roof-ends, although non-corridor coaches and auto trailers retained a more conventional roof. Fluorescent lights were tried in new coaches built in 1946.[2]

A few sleeping cars were operated on the broad gauge and such carriages became familiar on overnight trains. Restaurant cars became practical following the introduction of corridor trains; the first cars in 1896 were for first class passengers only but a second class buffet car appeared on the Milford Boat Train in 1900. Slip coaches were operated on many routes that could be uncoupled from the rear of a moving train and serve intermediate stations that the train did not call at.[2]

The livery of early carriages was a dark chocolate brown but from 1864 the upper panels were painted white which became a pale cream after being varnished and exposed to the weather. These panels were later painted in cream to give a similar effect. From 1908 carriages were painted chocolate brown all over but this changed to a red lake colour in 1912. A two-colour livery reappeared in 1922, now with a richer shade of cream on the upper panels and chocolate brown below. Certain vehicles such as parcels vans and horse boxes, which were allowed to run in passenger trains, were often painted in just chocolate brown when the passenger carrying coaches were in chocolate and cream, and so this non-passenger carrying coaching stock came to be known as "brown vehicles".[3]

Each class of carriage was initially numbered in its own series, starting at 1. This entailed renumbering any vehicles that were reclassified, for instance first class carriages downgraded to second class. To bring them all into one series in 1907 third class carriages were left with their original numbers; second class had 5000 added to their numbers; composites had 6000 added; first class had 8000 added; sleepers and saloons were renumbered in the 9000-9399 series; and catering cars were renumbered in the 9500 series.[2]

Diagram codes were introduced by George Jackson Churchward for easy reference to different carriage types. Each type could then be identified with a diagram that combined a letter (which represented a general type) and a number (which represented a distinctive design of that type ), for instance C3 or H16.[2]

The GWR pioneered telegraphic communication in 1839,[1] and a number of code words came to be used to represent various carriage types. The codes changed over the years as needs changed. Many of the codes could have an extra letter to identify variations, such as Scorpion C ( a 45 ft (14 m) carriage truck), or Scorpion D (a 21 ft (6.4 m) carriage truck). In 1939 the following codes were in use:[4]