The China pavilion at Expo 2010 in Shanghai, China, colloquially known as the Oriental Crown (东方之冠), was the largest national pavilion at the Shanghai Expo and the largest display in the history of the World Expo.[2][3] It was also the most expensive pavilion at the Shanghai Expo costing an estimated US$220 million.[4] The pavilion showcases China’s illustrious civilisation and modern achievements by combining traditional and modern elements in its architecture, landscaping and exhibits. The pavilion was reopened on December 1, 2010 for the first time since the end of the Shanghai Expo and will continue to be open to the public until May 31, 2011 in the with the exhibits shown during the expo. Afterwards, the pavilion will be converted into a museum of Chinese culture and history.[3]

The building is located halfway along the Expo Axis on its eastern side in Zone A of the Expo Park. The pavilion lies directly to the east of the Theme pavilions and to the north of the Hong Kong and Macau pavilions.

The chosen design was selected from a range of 344 design proposals put forward by architects from all over the world.[2] The chief architect of the pavilion was 72-year-old He Jingtang, the director of the Architectural Academy of the South China University of Technology.[2][3] The construction of the China pavilion began on 18 December 2007 and was completed in November 2009. On 8 February 2010, the completion of construction was commemorated by almost 1,000 people including the pavilion’s designers and construction workers.[2] 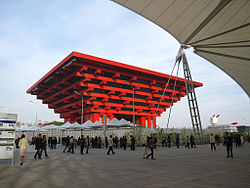 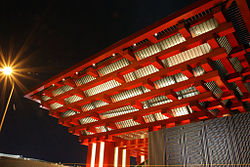 The 69.9-metre high pavilion, the tallest structure at the Expo, is dubbed "The Oriental Crown" because of its resemblance to an ancient Chinese crown.[4] It was meticulously designed with profound meaning and symbolism. The architectonic feature of the building was inspired by the Chinese roof bracket known as the dougong as well as the Chinese ding vessel. The dougong is a traditional wooden bracket used to support large overhanging eaves which dates back nearly 2,000 years. It symbolizes the unique charm of Chinese architecture and the unity and strength. The ding was a vessel used by Chinese emperors to make offers to the gods. It represents the union between heaven and earth. The China pavilion's four giant columns resemble the legs of a ding vessel while the inverted pyramid body resembles the bowl of a vessel. The rooftop of the building is in the shape of a grid-like pattern reminiscent of Jiugongge when view from the air. Jiugongge was the basis of urban planning in ancient China.[3] The exterior is painted in seven subtle shades of Chinese red, symbolizing Chinese culture and good fortune. The different shades combine effectively to illustrate the concept "unity with difference".[3] The overhanging columns of the main China pavilion and exterior of the Chinese joint provincial pavilion are decorated with Diezhuan characters, calligraphic characters used on official seals. The characters for north, south, east and west are engraved on the red China pavilion, while 24 Chinese solar terms are carved into the silver facade of the provincial pavilion.[3]

The structure was built with a strong emphasis on sustainable and energy-saving practices with the exterior offering thermal insulation and natural ventilation. The inverted pyramid design and the lower courtyard offers a large overhang for self-shading. There is a 0.36 mega-watt solar energy system on the rooftop while the thermal panels and insulating glasses on the exterior are energy-saving initiatives.

A high-tech rooftop garden surrounding the China pavilion and on top of the Chinese Joint Provincial pavilion is known as "New Jiuzhou Qing Yan" The 27,000-square metre traditional garden contains modern landscaping techniques and technology including rainwater harvesting techniques and is decorated with distinctly Chinese-style landscaping inspired by the Jiuzhou Qing Yan in the Yuanmingyuan. It was designed to emulate natural Chinese landscapes with Chinese wisdom and oriental charm in mind. The garden provides space for public recreation and crowd evacuation.[5] It uses nine landscaping features to symbolize nine characteristic topographies of China, namely, human habitat (here represented by the main building itself), farmlands, lakes, mountains, seas, forests, alpine meadows, valleys and deserts.

The theme of the pavilion during the Expo was "Chinese Wisdom in Urban Development". To enter the pavilion visitors must ascend the giant staircase on the north-facing side. The sheltered courtyard space within the four main columns provides a large open space for waiting crowds. The pavilion display highlights is divided into three parts: "The Footprints", "The Dialogue" and "The Vision". Visitors are taken by lift to the uppermost level for the first exhibition before working their way down the building for the subsequent segments.

This first part highlights the wisdom of Chinese urban practices in Chinese history, from the achievements of China's reforms in the late 1970s to the urban experiences of imperial China.

This hall features iconic symbols of a city.

In this exhibition, two seven-minute films are alternately shown in the 1,071 square metre 700-seat theatre of the pavilion. The films are shown on three 22m-long by 7.5m-high projection screens and an 24m-diameter overhead dome. Both films reflect the social and urban impact of China's economic transformation. 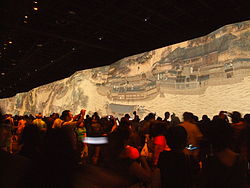 Along the River During the Qingming Festival

A world of greenness symbolizes the harmony between the people as well as that between Man and Nature in future Chinese cities. The Chinese-style development strategy of urban-rural integration is a key message here.

Highlight 2: The Dialogue (The Ride)

With an area of 3400 sq.m., excursion trains on a 340m-long track provide visitors with a 6-minute ride exploring urban wisdom and the dialogue between the past and present. The exhibits include "Gates of History", "Stone Bridges", "Dougong Matrix", "Tunnel of Planning" "Heavenly Garden and Garden City".

An exploration of a lower-carbon future in China. It shows how China is inspired by nature and will develop innovative solutions to meet the challenges of urban growth and environmental protection. The exhibits are represented simply by one of the four main mathematical operations: addition, subtraction, multiplication and division (+, -, ×, ÷)

The minus sign represents that reliance on fossil fuel shall be reduced and efficiency in energy consumption shall be improved to reduce waste.

The addition sign represents that increase of carbon emission is threatening global environment and hampering the development of human society.

Individual actions of reduced consumption can have a great effect, given the population of the country.

The multiplication sign represents that individual actions can add up to a great effect, given the large population in the country.

The division sign represents that the ambitious forest carbon sink plan, if divided by a large population, is a rational target.

Waiting crowds inside the central courtyard

The China pavilion was designed to accommodate up to 50,000 visitors over the course of any given day. Despite the fact that 73 million people visited the Shanghai Expo over a six-month, only 10 million visitors were able to see the China pavilion due to the huge numbers. The pavilion opened for nearly 13 hours a day.[7]

Unlike most of the other pavilions, the China pavilion along with the Theme Pavilions, Expo Cultural Center and the Expo Axis are not being dismantled following the Expo. The China pavilion will become a permanent history museum in Shanghai dedicated to Chinese culture and history.[2] The pavilion reopened its doors on 1 December 2010 for the first time since the conclusion of the World Expo on 31 October 2010. According to the Bureau of Shanghai World Expo Coordination, it is set to continue remain open for at least half a year with the same exhibits as those shown during the Expo period. A retrospective exhibition in the central courtyard where visitors can learn pavilion's construction and operation. The entry fee is ¥20 for adults and ¥15 for students, disabled people, military servicemen and aged people. The opening hours are between 9am and 5pm.[7][8]