The Twelve Tasks of Asterix

The Twelve Tasks of Asterix 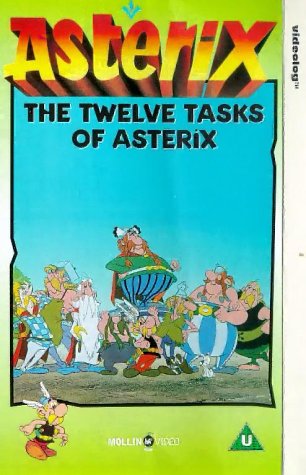 "The Twelve Tasks of Asterix" ("Les Douze travaux d'Astérix") is an animated based on the comic book series. The screenplay was written by , a friend of and , and produced at the . It's the first and so far the sole Asterix animated movie based on a original screenplay rather than a published , even though it was later adapted into a comic book as well as an illustrated text story book and a series of twelve books for young readers

After a group of legionaries is beaten up by the s, they imagine: "With such huge strength, they can't be human... they must be gods". is informed, and laughs. He makes a decision with his council and goes to , to speak with Vitalstatistix. He gives the Gauls a series of 12 tasks, inspired by (but new ones, since the 12 Labours are outdated). Vitalstatistix assembles their best warriors, Asterix and , to do the job. The Roman Caius Tiddlus is sent along with them to guide them and check they complete each task.

#Run faster than Asbestus, champion of the Olympic Games. Asterix, helped by the magic potion, follows Asbestus until he runs so fast he becomes a and exceeds the , before hitting an . His nose swells up like a balloon and Obelix comments on how Gaulish it looks.
#Throw a javelin farther than Verses, the Persian. Verses' javelin hits (still only inhabited by Indians, including another Goscinny-Uderzo character, ), but Obelix's javelin somehow enters a stable orbit and ends up pursuing Verses into the distance. As far as anyone can tell, he's still running from it.
#Beat Cilindric, the German. Cilindric turns out to be an unexpectedly diminutive man wearing a gi &ndash; but he quickly beats Obelix with a "fighting technique he learnt in a distant land". Asterix defeats Cilindric by tricking him into giving a lesson and asking for demonstrations that eventually end up with Cilindric's own arms and legs tied in knots.
#Cross a lake. The problem being that in the middle of the lake is the "Isle of Pleasure", a paradise inhabited by beautiful s. Both Asterix and Obelix are enchanted and drawn to the island, but Obelix comes to his senses quickly after discovering that there are no wild boars on the island, has an incandescent argument with the Sirens, and storms off, calling Asterix to follow him.
#Survive the hypnotic gaze of Iris, the Egyptian. Iris uses hypnosis to make his clients believe they are animals. He tries to make Asterix act to the phrase, "I am a wild boar", but when Asterix constantly breaks his concentration, Iris gets horribly confused and ends up hypnotising himself and bolting out of the building on all fours.
#Finish a meal by Mannekenpix, the Belgian. The chef is famous for cooking gigantic meals for the - the task was to eat one of his massive three-course meals "down to the last crumb". Obelix devours a with fries, a flock of geese, several , an made with eight dozen eggs, a whole school of , an , a cow, ("because to separate ze family...zat would not be right!"), a huge mound of (with a single piece of ), a , ("and before we start on the main course") an stuffed with olives. Later on the chef leaves the kitchen crying as everything in his kitchen was eaten, but a slightly disappointed Obelix believes that the huge meals were only appetisers.
#Survive the Lair of the Beast. In a distinctly abstract sequence of the film, the pair must enter a cave that no-one has ever emerged from alive - even Tiddlus has no idea what lurks within it. They encounter, among other sights, played with a , s, and a subway (on ier stop of Alésia), before meeting the Beast. The lights suddenly go dark and the Beast is not shown on-screen. After they leave the cave, Tiddlus asks out of curiosity what the Beast was actually like - Obelix happily replies that it was "very tasty".
#Find Permit A 38 in "The Place That Sends You Mad". A mind-numbing multi-storey building founded on and staffed by clinically unhelpful people who direct all their clients to other similarly unhelpful people elsewhere in the building. Asterix eventually beats them at their own game by asking for an imaginary permit that nobody knows about, sending the place into disarray. Eventually Asterix is given Permit A 38 just to make him leave and stop causing trouble.
#Cross a ravine on an invisible , over a river full of s. Eventually the heroic duo decide to give up on the rope and go the easy way round, jumping off and fighting the crocodiles, leaving the bemused creatures dangling on the invisible wire.
#Climb a and answer the Old Man's riddle. After a tough climb of the snowbound peak, the Old Man of the Mountain's challenge is to determine, with eyes blindfolded, which pile of laundry was washed with "Olympus", "the of the gods". Asterix performs this task easily in a parody of washing detergent advertisements.
#Spend a night on the haunted plains. The plain, haunted by the ghosts of fallen Roman soldiers, is not an easy place to sleep. Obelix tries to fight them, but cannot harm ghosts. Asterix, woken by the commotion, furiously confronts the ghosts and they flee when they realise that the Gauls are not afraid of them.
#Survive the . When the pair wakes up after a night on the plains, they find themselves in , ("either that or these Romans have learnt to build very fast") with their fellow villagers, who have been brought to fight in the . After the s are beaten (with the help of Getafix's potion, of course) the animals are sent in, and the Gauls turn the Circus Maximus into a modern day .

After the Gauls succeed in every task, Caesar agrees that they are gods, gives them control of the , and retires to live with in a little house in the country. Caius Tiddlus takes his reward by retiring to the Isle of Pleasure.

A great banquet in the village.
*Obelix: "Have we really become the masters of Rome?"
*Asterix: "Let's face it, this is only a cartoon film, and anything goes!"
*Obelix: "Anything goes!?"(Obelix and his boar disappear, and land in the Isle of Pleasure.)

There is a comic book adaptation of the film. The English translation, only published as part of a once off comic book annual, was based on the dialogue of the English version of the film and was titled "". There is also an illustrated book of the film containing the story in text. The story book is more regularly published and more widely translated than the very rare comic book. In addition there are also twelve rare illustrated text story books for young readers, one for each of the twelve tasks.

* Caesar's senate features Brutus, who constantly plays with a . Caesar remarks: "Stop playing about with that knife, you'll end up hurting someone!" (after an off-camera yelp of pain, Brutus appears in the next cut with a sullen look on his face and a bandage on his hand).
* Mannekenpix's colossal meal includes a side-dish of fries, which he claims to have invented despite potatoes not being present in Europe at the time. He refers to them as "earth-apples", the literal French translation of potatoes ("pommes de terre").
*The "place that sends you mad" is not all that anachronistic. The roman empire, especially its later eastern part () was famous for its overly complicated and heavy bureaucracy. All that red tape was partly responsible for the empire's fall. [ According to Jean Luc Bonnaud, history professor at the University of Moncton]