The Maruyama Dam (丸山ダム, Maruyama Damu?) is a dam on the border of Mitake and Yaotsu in Gifu Prefecture, Japan. It was built on the upper reaches of the Kiso River system. It is a gravity dam that is 98.2 m (322 ft) tall. It was built after World War II as part of a large, nationwide dam building project.

Sosui Gorge (蘇水峡 Sosui-kyō) was formed by the completion of the dam. Along with Ena Gorge further upstream, the area is part of the Hida-Kisogawa Quasi-National Park. 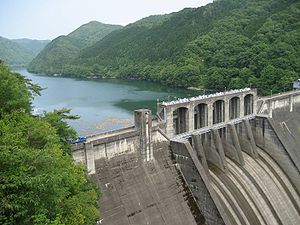 Maruyama Dam with Sosui Gorge behind it