The Ōi Dam (大井ダム, Ōi Damu?) is a dam located between the cities of Ena and Nakatsugawa in Gifu Prefecture, Japan. It was built to produce electricity for the surrounding area. The Agi River flows through the damn.

Built in 1924, the Ōi Dam was the first dam built anywhere on the Kiso River system. It is also the first hydroelectric dam built in Japan. At 53.4 m (175.2 ft) tall, it is the largest gravity dam in Japan after the Taishakugawa Dam in Hiroshima Prefecture. In 1983, the New Ōi Dam (新大井ダム Shin-Ōi Damu) was built just downstream. Combined, they produce 80,000 kW of power.

The reservoir created by the dam was named Ena Gorge. More than 10 km (6 mi), the gorge is lined by rocky walls on both sides. Along with the lake created by the Maruyama Dam downstream, the area has been designated the Hida-Kisogawa Quasi-National Park. 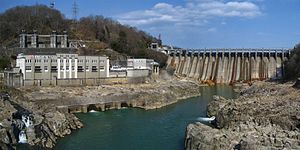