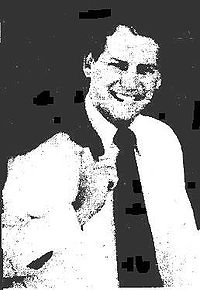 Dr. Earl Winfrey Brian, Jr. (born 1942) was a decorated combat surgeon with an aerial support unit for the United States Central Intelligence Agency's Vietnam War-era Phoenix Program. Upon completion of his tour of duty, he departed military service "as a major in the Army's 1st Cavalry Division with a chest full of honors, including the Silver Star, Bronze Star, Air Medal for Valor and Air Medal for Aerial Combat Duty."[1] He then returned to California in 1970, where he became a member of then-Governor Ronald Reagan's "Kitchen Cabinet."

Questionable business practices and backroom politics soon consumed much of Brian's adult career, involving him during President Ronald Reagan's Administration in several major political scandals, most notably the so-called October Surprise Conspiracy; the bankruptcy (and software piracy) case of Inslaw Inc. v. United States Government; and the confirmation hearings of Edwin Meese. In 1996, he was convicted on ten counts of fraud and sentenced to four years in prison.

Earl Winfrey Brian, Jr. was born in Raleigh, North Carolina. Currently, little is known about his youth other than that he achieved wide recognition as a highly-respectable amateur tennis player.[2] In 1964, he married Jane Lang; and two years later, earned a medical degree from Duke University. [1] He then entered military service.

After his tour of duty in Vietnam, he returned to California to do postgraduate work at Stanford Medical School.[3] One night, while performing duties as a resident intern, Brian checked upon patient, Ned Hutchinson, Ronald Reagan's campaign manager for San Mateo County, California. Brian so impressed Hutchinson so well that he recommended Brian to California health officials. Shortly thereafter, by late 1970, Brian found himself occupying the executive secretary's office of the California State Social Welfare Board. "I found out they were going to pay me $1,200 a month, not just $120 a month, like at Stanford," Brian is quoted as saying, "It was an easy decision."[4]

— as an advocate of state subsidies for the Center for the Prevention of Violence (which was Governor Reagan's proposed but aborted site for the study of behavioral abnormalities).[5] Perhaps though Brian is best remembered in California-politics for his participation in a 1971 Medi-Cal debate to win support for the Republican Party's insistence that Medi-Cal recipients be required to put up a $2 co-payment for each doctor’s visit:

The year was 1971 and the issue was Medi-Cal reform....[The] Legislature was controlled by Democrats and the governor was a Republican, Ronald Reagan....

"This was a big philosophical debate and we couldn’t resolve the issue," recalled then-Assemblyman Bill Campbell.

"We’re saying, ‘How are we going to resolve this?’ " Campbell remembers. "Finally, Moretti says to Brian, ‘I’ll arm-wrestle you for it.’ And Earl says, ‘OK, I’ll do it.’

"I say, ‘No, no, I can’t let this happen.’ I knew Bobby was a phenomenal arm wrestler and had great upper body strength. He’s sitting there smiling. Earl’s looking, well, a little flabby."

Both men were in their 30s.

"They sat down at a table with Willie and me watching," Campbell continues. "This is your Legislature at work. It was unbelievable. I’m thinking, this is it, we’ve definitely lost co-pay.

"We had a lot of fun laughing. Willie goes back to his committee and says, ‘Without objection, AB 949 is amended to include a $2 co-pay.’ And that’s how Ronald Reagan got Medi-Cal reform.

"What I didn’t know about Earl Brian was that as a youngster he was one of the top-ranked tennis players in the nation. He had built up a tremendous right arm."

Brian was sued by the California Medical Association for his handling of Medi-Cal and lost; the final decision was affirmed by the California supreme court.[6] Sometime prior to 1974, Brian authored a book on "investing in securities"[7] though this claim has yet to be verified. He then resigned his cabinet post, ran for the U.S. Senate seat of Senator Alan Cranston (D–CA), but lost in the primaries.[1][7] Before he left California-politics completely however, Brian found himself in the midst of a minor scandal: he had removed over 1000 computer tapes from the California State welfare records;[8] he claimed their importance was "incidental", and that his critics were frenzied by a "ploy intended to obfuscate the abortive Gestapo raid ordered by the [present] secretary of health."[8] He then "retreated to the University of Southern California as a professor of medicine",[1] inherited $50,000 from his father and entered the world of business as a venture-capitalist.[9]

In 1975, he became president of Los Angeles-based Xonics Inc., a high-tech company with "several contracts with the Department of Defense and the CIA."[10] Xonics "specialized in telecommunications, radar techniques and X-ray imaging."[10] On April 7, 1977, the SEC permanently enjoined Xonics for violations of the antifraud provisions of the securities laws.[11] According to Wired (magazine), "Xonics, was cited by the Security and Exchange Commission for issuing press releases designed to boost stock prices with exaggerated or bloated information. The SEC also accused Xonics of illegally paying "commissions" to brokers...."[12] Then, in October, "Brian slipped away from the company discreetly, just six months after Xonics rolled over and agreed to the SEC injunction. Brian was never charged with any wrongdoing; four Xonics officers were required to sign the consent decree, and he was not one of them." [13]

However, according to a 1991 Financial Post article, "...it was Biotech Capital Corp., the predecessor to Infotech, that would become Brian's main business vehicle—and, ultimately, the source of most of his problems."[1] Biotech Capital was a venture capital firm that invested in medical companies. Brian launched it shortly after his divorce in 1977 and subsequent remarriage in 1978 to Diana Vivian, a New England debutante. "Vivian's father, who put money in the company, was installed as vice president, treasurer, and secretary."[14]

It is key to note that all the following information related to "Inslaw" is conjecture and allegation, according to the New York Court of Appeals, [15] which stated that claims related to Inslaw "represented...opinion(s)...and that...specific charges about [Dr. Brian] were allegations and not demonstrable fact."

As a principal shareholder and board member of Hadron Inc., a government consulting firm,[nb 1] Earl Brian allegedly met with Islamic radicals in Paris on the weekend of October 17–20, 1980, to deliver 40 millions-$U.S. to the Islamic Republic of Iran in exchange for the release of 52 Americans held hostage in Tehran. For his help in this so-called October Surprise conspiracy, Earl Brian allegedly was allowed to profit from the illegal pirating of the Promis system. [18]

According to Michael Riconosciuto (who was described by a House Investigating Committee as "a shady character allegedly tied to U.S. intelligence agencies and recently convicted on drug charges"[15]), he and Earl Brian "traveled to Iran [in 1980]... to persuade [Iranian officials] not to let the hostages go before the presidential election."[12][19][20][nb 2] Additionally, in a 1991 affidavit[22] filed in the Inslaw Inc. v. United States Government case, Riconosciuto claimed to have reprogrammed Inslaw's software under Earl Brian's direction sometime between 1983–84 at the behest of top-level officials within the United States Department of Justice so that it could be sold to dozens of foreign governments with a secret "back door" which allowed outsiders to track individuals using the Prosecutor's Management Information System (Promis) software.[nb 3] Riconosciuto further alleged that Brian used the proceeds from the illegal sale of Promis to fund weapons manufacturing at a remote and sovereign Cabazon Indian Reservation in Indio, California, in conjunction with the Florida-based Wackenhut Corporation as a scam to supply munitions and biological warfare weapons to the Nicaraguan contras.[25]

Shortly after publication of these allegations in a New York Times op-ed article ("A High-Tech Watergate")[18][nb 4] Earl Brian responded with a libel suit against the author, Elliot Richardson, the former Attorney General under the Nixon Administration, and principal counsel for Inslaw, Inc. However, on February 26, 1993, a New York trial court dismissed Brian's complaint; and then, twenty-one months later, The New York Court of Appeals unanimously affirmed the lower court's ruling.[26] To this day, Earl Brian has denied these allegations always—though when confronted directly on specific details, Brian has refused to be interviewed.[12]

In 1996, Brian was indicted, arrested, and convicted on ten of thirteen counts of falsifying company finances during 1989 to obtain $56 million in bank loans.[27][28] At the time of the alleged fraud, Brian was the chairman of two companies specific to the charges: United Press International and Financial News Network.[29] He was then sentenced to four years and nine months in federal prison, but was free on bail during his appeal. On October 14, 1998, a federal appeals court upheld his fraud convictions.[30] Brian soon entered prison. The following year, the U.S. Supreme Court refused to hear his case.[31] He was released on November 1, 2002, (see) after having served his complete sentence.