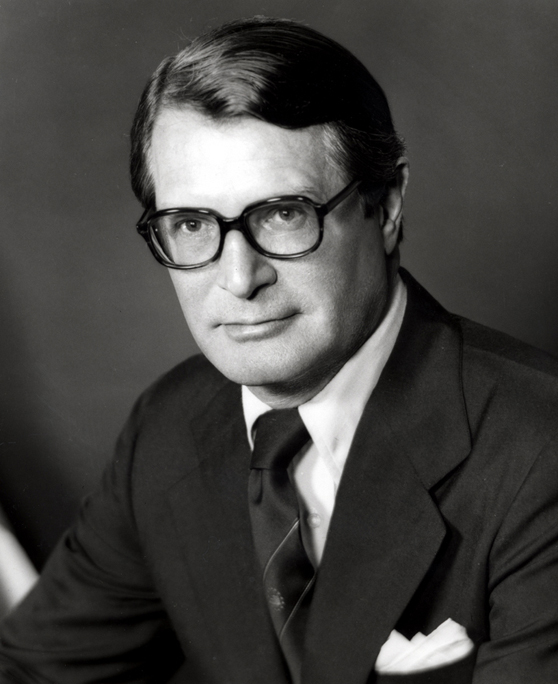 Elliot Lee Richardson (, &ndash; , ) was an American lawyer and politician who was a member of the cabinet of Presidents and . He was a prominent figure in the , having refused an order from Nixon to fire special prosecutor .

Richardson was born in Boston, . He obtained his undergraduate degree from , where he resided in , and graduated in 1941.

In 1942, following America's entry into , Richardson entered the combat medical corps in the . He participated in the June 6, 1944 , where he carried a legless man to safety under enemy fire.

He was among the first troops of the "Big Ivy" to come up "Causeway No. 2" from which had been under fire from German artillery at Brécourt Manor. He was among the many that noticed the guns ceasing their firing after (unbeknown to him), paratroopers of the 101st under had knocked them out. After 's book "" was published, he wrote to Winters and thanked him.

He continued on in the war in Europe with the 4th Infantry Division and received numerous decorations, including the medal. He was discharged in 1945 with the rank of first lieutenant.

After his graduation from Law School, Richardson clerked for Appeals Court Judge , and then for Justice of the U.S. Supreme Court. Richardson then served as U.S. Attorney for Massachusetts from 1959 to 1961, and was later elected the and .

Richardson's son, Henry S. Richardson, is a professor of philosophy at , where he focuses in moral and political philosophy.

Richardson had the nearly-unique distinction of serving in three high-level Executive Branch posts in a single year --the tumultuous year of 1973 -- as the came to dominate the attention of official Washington, and the American public at large.

Having served three relatively uneventful years as the Secretary of Health, Education, and Welfare for a popular sitting President, few would suspect the pivotal role Richardson would play in the chaos that would soon ensue.

Richardson was appointed on , . When President Nixon selected Richardson as Secretary, the press described him as an excellent manager and administrator, perhaps the best in the cabinet. In his confirmation hearing, Richardson expressed agreement with Nixon's policies on such issues as the adequacy of U.S. strategic forces, NATO and relationships with other allies, and Vietnam.

Although he promised to examine the budget carefully to identify areas for savings, and in fact later ordered the closing of some military installations, he cautioned against precipitate cuts. As he told a Senate committee, "Significant cuts in the Defense Budget now would seriously weaken the U.S. position on international negotiations&mdash;in which U.S. military capabilities, in both real and symbolic terms, are an important factor." Similarly, he strongly supported continued military assistance at current levels. During his short tenure, Richardson spent much time testifying before congressional committees on the proposed FY 1974 budget and other Defense matters. [ cite web|url=http://www.defenselink.mil/specials/secdef_histories/bios/richardson.htm |title=SecDef Histories - Elliot Richardson |accessdate=2007-12-30 |publisher=Secretary of Defense]

Richardson would serve as Secretary of Defense for only a few short months, before becoming Nixon's Attorney General, a move that would soon put him in the Watergate spotlight.

In October 1973, after just five months as Attorney General, President Nixon ordered Richardson to fire the top lawyer investigating the Watergate scandal, Special Prosecutor . Richardson refused the order and resigned from the Nixon administration. President Nixon subsequently asked Richardson's second-in-command, Deputy Attorney General to carry out the order. But he also refused and tendered his resignation. The third in command, Solicitor General , also planned to resign but Richardson persuaded him not to in order to ensure proper leadership at the Department of Justice during the crisis. [ cite journal|title=Interview with Deputy Assistant Attorney General John C. Keeney|journal=U.S. Attorneys' Bulletin|date=interviewed on 1998-10-13|first=David M.|last=Nissman|coauthors=|volume=47|issue=02, Cumulative Index|pages=2|id= |url=http://cybersafe.gov/usao/eousa/foia_reading_room/usab4702.pdf|format=PDF|accessdate=2007-12-30] Bork carried out the President's order, thus completing the events generally referred to as the .

During the Administration of President , Richardson served as from 1976 to 1977, and as ambassador to the .

From 1977 to 1980, he served as an Ambassador at Large and Special Representative of President for the and head of the U.S. delegation to the Third . [ cite news |first= |last= |coauthors=Richardson, Elliot L. |title=Power, Mobility and the Law of the Sea |date= Spring 1980 |work=Foreign Affairs |url=http://www.foreignaffairs.org/19800301faessay8260/elliot-l-richardson/power-mobility-and-the-law-of-the-sea.html |pages= |accessdate = 2008-04-22 |language= (Article Preview).]

In 1980 Richardson received a from . In 1984, he ran for the Republican nomination for the U.S. Senate seat being vacated by . He was defeated in the GOP primary by , who lost the general election to . Richardson was a moderate-liberal Republican, and his defeat at the hands of the very conservative Shamie was seen as symbolizing the decline of the moderate wing of the GOP, even in a section of the country where it was historically strong.

In 1994 Richardson backed President during his struggle against ' charge of sexual harassment. In 1998, he received the , the nation's highest civilian honor.