Mary Elizabeth Winstead (born November 28, 1984) is an American actress. She is best known for her scream queen roles in the horror films Final Destination 3, Black Christmas, Death Proof, and The Thing. Winstead's earliest acting career was in television including her work on the soap opera Passions, for which she was nominated for a Young Artist Award.

Winstead, the fifth and youngest child[1] of Betty Lou (née Knight) and James Ronald Winstead, was born in Rocky Mount, North Carolina.[2] When she was five, her family moved to Sandy, Utah, a Salt Lake City suburb.[2][3] As a girl, Winstead attended Peruvian Park Elementary, where she excelled academically and attended advanced classes.[3] A talented dancer and singer, Winstead studied dance in a Joffrey Ballet summer program in Chicago, Illinois[3] and was also a member of the International Children's Choir.[4] In her youth, Winstead initially hoped to pursue a career as a ballerina and appeared in local ballet productions.[3] As she entered her teens, however, Winstead was forced to quit ballet due to her height. She later stated "I realized pretty early on that I was already too tall by the time I was 13... You know, your body has to stay that way for your entire life, and it's pretty hard on your muscles and your bones".[2] Realizing that her career as a ballerina was unlikely, Winstead turned to acting.[2]

After leaving ballet to pursue an acting career, Winstead first appeared on Broadway during Donny Osmond's successful run of Joseph and the Amazing Technicolor Dreamcoat.[5] After her brief stint in Broadway, Winstead began making appearances in various television series and earned guest roles in Touched by an Angel and Promised Land. She gained her first major role when she was cast as Jessica Bennett in the NBC soap opera series Passions. Winstead was a series regular and held the role from 1999 to 2000 before leaving to pursue other interests. Winstead later stated, "I really had one of the smallest roles on Passions, so I didn't get too involved... I was able to leave pretty easily".[6] After leaving Passions, Winstead's next significant television role was in the short-lived CBS drama series Wolf Lake (2001-2002), where she portrayed the daughter of Tim Matheson's character.[7] The series lasted ten episodes before being cancelled. In 2004 Winstead played a supporting role in MTV's made-for-television film Monster Island. In 2005 Winstead played a minor role in the indie comedy Checking Out. Winstead gained a much larger role later that year as the main antagonist of the Walt Disney Pictures film Sky High. The film was well-received by critics, holding a 73 percent on Rotten Tomatoes,[8] and fared well at the box office.[9] 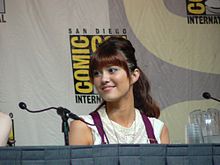 Winstead at the 2006 Comic-Con International, promoting the film Grindhouse.

After her appearance in Sky High, Winstead began to work with horror producers James Wong and Glen Morgan, previously known for their contributions to The X-Files. Their collaboration began when Winstead starred in Final Destination 3.[10] The film did well at the box office[11] but received mixed reviews from critics and holds a rating of 45 percent on Rotten Tomatoes.[12]

Winstead's next appearance was in the slasher-film Black Christmas, where she once again collaborated with Wong and Morgan. The film fared poorly with critics,[13] but earned her a nomination for Scream Queen at the 2007 Scream Awards. Winstead inadvertently received a chance to lampoon horror scream queens when Tonight Show host Jay Leno, unaware of who she was, knocked on her front door and included her in a comedy segment spoofing horror films.[14]

That same year, she appeared in Emilio Estevez's Bobby, a biopic depicting the last hours in the life of Robert F. Kennedy.[15] Winstead became interested in Bobby after learning that Anthony Hopkins would also appear in the film.[15] The film received mixed reviews[16] with many criticisms directed at the film's script.[17] She and her co-stars were nominated for the Screen Actors Guild Award for Best Cast in a Motion Picture but won the Hollywood Film Festival Award for Best Ensemble Cast.[18]

In 2007, Winstead appeared in a pair of high-profile event films. Quentin Tarantino cast her as a well-intentioned but vapid and naïve actress in his high-speed segment of Grindhouse called Death Proof,[19] his half of a double-billed feature. Death Proof is the second film to feature Winstead with Kurt Russell (the first being Sky High). Grindhouse opened to positive reviews[20] but performed poorly at the box office.[21] Following Death Proof, Winstead won the part of John McClane's estranged daughter Lucy in Live Free or Die Hard, beating out other candidates for the role including Jessica Simpson.[1] The fourth film of the installment was financially and critically acclaimed.[22][23] 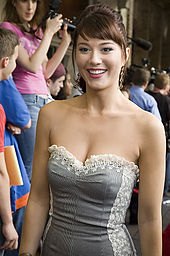 Winstead at the premiere of Grindhouse in Austin, Texas, March 2007

In 2008, Winstead screen-tested for the role of Wonder Woman in the film adaption of Justice League.[24] She starred in a lead role in Make It Happen, a dance film.[25] The film went straight to DVD in the US, and fared poorly upon release in the UK, which eventually led to its financial failure. Nevertheless, the film proved a delight for Winstead to shoot, as she had always dreamed about becoming a dancer.

Winstead co-starred opposite Michael Cera in the comic-book adaptation Scott Pilgrim vs. The World, under the direction of Edgar Wright.[26] Filming occurred from March[27] to August 2009.[28] For her role, Winstead went through fight training for two months and performed most of her own stunts.[29] The film was released in 2010 to critical acclaim but lackluster box office returns.

In February 2010, Winstead was cast in the lead role as paleontologist Kate Loyd in the prequel to The Thing, which was directed by Matthijs van Heijningen Jr. The movie was released October 14, 2011.[30][31] Winstead stated that there was no romantic subplot for her character as she felt it would be out of place in the context of the film.[32] Winstead based her performance on her sister, a neurologist.[33]

Winstead has expressed interest in returning as Lucy McClane for a fifth installment of the Die Hard film series, although her involvement in the project is yet to be confirmed.[34][35] She was also mentioned in news regarding the prequel to The Ring (tentatively titled The Ring 3D), though further information is yet unknown.[36]

In 2010, Winstead reportedly tested for the female lead in a romantic comedy penned by Elan Mastai named The F-Word opposite Casey Affleck,[37] but no decision has been made as of November.[38][39] She was also tested to be the female lead in the Spider-Man reboot[40][41][42] and the lead opposite Matt Damon in We Bought a Zoo, a film adaptation of Benjamin Mee's autobiographical novel of the same name,[43][44] although she was not chosen in either case.[45][46]

On February 17, 2011, it was confirmed that Winstead was chosen to play the role of Mary Todd Lincoln alongside Benjamin Walker in the upcoming film adaption of Abraham Lincoln: Vampire Hunter.[47] The film is set to be released in the summer of 2012 and be directed by Wanted director Timur Bekmambetov.[48] Winstead was also a potential candidate for a role in Joss Whedon's upcoming Avengers film.[49]

On October 28 the same year, it was reported that Winstead was cast in Roman Coppola's A Glimpse Inside the Mind of Charles Swan III. The film, due for release in 2012, will see her reuniting with Jason Schwartzman and Aubrey Plaza after their collaboration on Scott Pilgrim vs. the World. She will also be co-starring alongside Charlie Sheen, Katheryn Winnick and Maxine Bahns.[50]

Winstead is married to Riley Stearns, a film director and television writer from Austin, Texas,[51] whom she met at age 18, while on a cruise. The couple were wed in 2010.[52] In 2008, they worked together in Stop/Eject – a short film he was making with Winstead's Final Destination 3 co-star Ryan Merriman, which is as of yet still in post-production.[53] The project was shot on the weekends during the 2008 writers' strike. Winstead elaborates, "The whole short is 25 minutes long. We're currently working on post sound and music and we hope to show it at festivals."

Winstead had stated that at one point, Final Destination 3 co-star Amanda Crew "stayed with [her] for a while". She has also called Lacey Chabert her "confidant" and in the same interview, says she is good friends with Death Proof co-stars Rosario Dawson and Sydney Tamiia Poitier. "I'm not a really 'cliquish' type of person," she says of herself. "There's usually one person that I gravitate to, who I feel I relate to the most, and kind of stick to throughout the whole thing."[2] While filming Scott Pilgrim vs. the World, Winstead made good friends with co-star Anna Kendrick. “The two of us, we were just sitting up there watching the first fight [scene] in the balcony together for a week and a half, and we were always talking about gossip, film news and just gabbing about everything!”[54]

Winstead has voiced her fondness for the music of Bat for Lashes, French pop songs (particularly France Gall), mewithoutYou, The Shangri-Las, The Shirelles, Roy Orbison, The xx and Ben E. King's "Stand By Me".[55]

Winstead has expressed her interest in singing, but does not plan on pursuing it as a career. "I wasn't ever really going to be a singer, but it's just something I've always loved."[56] For her part of the Grindhouse film, Tarantino had Winstead sing an a cappella cover of The Shirelles' hit recording "Baby It's You".[57] She was asked impromptu to perform the song and the cast were reportedly "gob-smacked" by her singing.

In 2009, Winstead and music producer Thai Long Ly co-wrote a song, "Warmth of Him".[58] Although first rumored to be a pre-release single, Winstead has since then confirmed that she was just exploring her interest and does not plan on releasing any music albums.