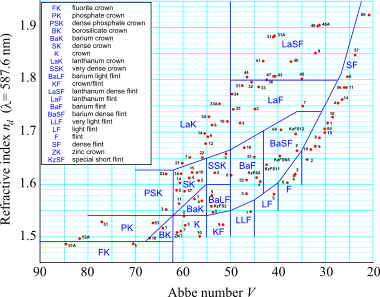 An Abbe diagram plots the Abbe number against refractive index for a range of different glasses (red dots). Glasses are classified using the Schott Glass letter-number code to reflect their composition and position on the diagram. 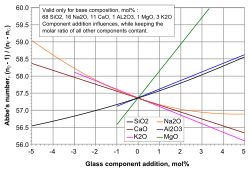 Influences of selected glass component additions on the Abbe number of a specific base glass.[1]

In physics and optics, the Abbe number, also known as the V-number or constringence of a transparent material, is a measure of the material's dispersion (variation of refractive index with wavelength) in relation to the refractive index. It is named after Ernst Abbe (1840–1905), the German physicist who defined it.

The Abbe number V of a material is defined as

where nd, nF and nC are the refractive indices of the material at the wavelengths of the Fraunhofer d-, F- and C- spectral lines (587.6 nm, 486.1 nm and 656.3 nm respectively). Low dispersion (low chromatic aberration) materials have high values of V.

Abbe numbers are used to classify glass and other optically transparent materials. For example, flint glass has V < 50 and crown glass has V > 50. Typical values of V range from around 20 for very dense flint glass, around 30 for polycarbonate plastics, and up to 65 for very light crown glass, and up to 85 for fluor-crown glass. Abbe numbers are only a useful measure of dispersion for visible light, and for other wavelengths, or for higher precision work, the group velocity dispersion is used.

Alternate definitions of the Abbe number are used in some contexts. The value Vd is given by

which defines the Abbe number with respect to the yellow Fraunhofer d (or D3) helium line at 587.5618 nm wavelength. It can also be defined at the green mercury E-line at 546.073 nm:

An Abbe diagram is produced by plotting the Abbe number Vd of a material versus its refractive index nd. Glasses can then be categorised by their composition and position on the diagram. This can be a letter-number code, as used in the Schott Glass catalogue, or a 6-digit glass code.

The following table lists standard wavelengths at which n is usually determined, indicated by subscripts.[2] For example, nD is measured at 589.3 nm: