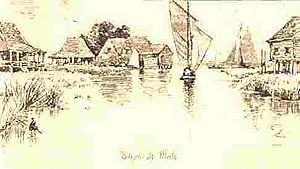 Saint Malo Settlement as it appeared in Harper's Weekly, 1883

Saint Malo was a small fishing village that existed in St. Bernard Parish, Louisiana on the shore of Lake Borgne from the mid 18th century into the early 20th century, when it was destroyed by the New Orleans Hurricane of 1915.[1] It was the first settlement of Filipinos in the United States.

The area of St. Malo is named after the leader of a group of runaway slaves. In 1784 a group of runaway slaves led by Jean Saint Malo escaped to a marshy area of Lake Borgne with weapons obtained from freed persons of color and plantation slaves. Jean Saint Malo was eventually captured by Spanish forces. On June 19, 1784, he was hanged in front of St. Louis Cathedral in what now called Jackson Square, New Orleans.[2]

St. Malo was on a waterway about 5 miles (8.0 km) east of the fishing village of Shell Beach called St. Malo Bayou.

The Saint Malo settlement was established, by some accounts, as early as 1763 by Filipinos who deserted from Spanish ships during the Manila Galleon Trade.[3][4] Other accounts suggest that the community was established sometime after 1812.[5] Reasons for their desertion from the ships varied; however their desire to escape the Spanish brutalities is generally regarded as the main reason.[6] They settled in the marshlands of Louisiana where no Spaniards could reach them. The people who settled in the bayous were called Manilamen and later on as Tagalas.[7] They governed themselves and kept their existence a secret from mainstream society for over a hundred years.[8]

It wasn't until journalist Lafcadio Hearn published an article in Harper's Weekly in 1883 that their existence was finally exposed to the American people. Hearn's article is the first known written article about the Filipinos in the United States.[9]

Hearn was able to visit the village, and his account provided very detailed information regarding their dwellings. The Manilamen lived in small houses which were supported above the water by stilts.[1] The palmetto[disambiguation needed

] and woven cane did not have the durability to withstand the violent climate of the bayous. Much of the wood needed to build the houses had to be shipped from various parts of Louisiana, as wood strong enough to support dwellings could not be easily found in the swamps. Since many creatures of all kinds lived in the swamps, the dwellers found it necessary to improvise their houses. They had every window closed with wire netting to protect themselves from mosquitos and other insects and also had to be vigilant for reptiles and other animals abound in the swamps. There was no furniture, no table, no chair and no bed in any of the dwellings. What could have been considered as mattresses were filled with what Hearn called “dry Spanish-beard.” These were laid upon “tiers” of shelves faced against the walls. According to Hearn the fishermen slept at night “among barrels of flour and folded sails and smoked fish.”

The diet in the village was mainly fish. They rarely ate rice, even though it is a staple food of Filipinos.

The predominant religion of the Manilamen was Roman Catholicism, although it was not known if a priest actually visited the settlement from nearby New Orleans to minister or perform any Christian rites and sacraments.

The Manilamen paid no taxes and had no policemen. They had set their own rules and laws that all those living in the village were bound to obey. In case of disputes, it was usually left to the oldest man currently living in the settlement to mediate the situation. If a man refused a given verdict or likewise became a problem, he was jailed in what was called a “fish-car”, a makeshift jail cell. Due to the harsh conditions and lack of food, the offender would usually change his mind and obey any rule or decision. The village was never visited by any Louisiana government official or tax man even though it was within the jurisdiction of the nearby St. Bernard Parish.

Rarely did women live in the village. In fact there were no women in the village during Hearn's visit. Those fishermen who did have families had them live in New Orleans or in other localities.[3] The reason for this can be attributed to the isolated and harsh conditions of the settlement. Since there were no Filipino women, the Manilamen often courted and married Cajun women, Indians, and others. Some of them enrolled their children in schools in New Orleans.

Whenever possible, if there were still the means of re-connecting with their families back in the Philippines, the Manilamen often sent money to friends in Manila with the profits they made from fishing.

According to oral history and later cited by Filipino historians, the Manilamen took part in the Battle of New Orleans in 1815 during the War of 1812. These men signed up with the French buccaneer, Jean Baptiste Lafitte to join the army of Major-General Andrew Jackson.[5][6][10]

On January 8, 1815, a British army numbering about 8,000 men prepared to capture New Orleans, Louisiana. Under the command of Major-General Sir Edward M. Pakenham, the British soldiers were against the American army composed of only about 1,500 men under the command of General Jackson. According to historian Marina Espina, the American Army consisted of “regular army troops, state militia, western sharpshooters, two regiments and pirates from the Delta Swamps.” It has long been suspected, but never confirmed, that these pirates were the Manilamen. The pirates were described as "Spanish fishermen" from the Lake Borgne area. The only known Spanish-speaking fishermen living in the area at that time were the Manilamen.

Saint Malo was only one of the Filipino settlements in the Southern United States. The other settlements were Manila Village on Barataria Bay in the Mississippi Delta by the Gulf of Mexico; Alombro Canal and Camp Dewey in Plaquemines Parish; and Leon Rojas, Bayou Cholas, and Bassa Bassa in Jefferson Parish, all in Louisiana. Manila Village on Barataria Bay was considered to be the largest and most popular, Saint Malo, however, was the oldest. Houses in Manila Village were built on stilts on a 50-acre (200,000 m2) marshland; this community survived until 1965, when Hurricane Betsy destroyed it.[11][12] Among the legacy introduced by the Filipinos was the production of dried shrimp, known as "sea bob" from the French term "six barbe". Dried shrimp is still produced by the Cajuns of Louisiana.[12][13] Some of the descendants of the original settlers continue to live in Louisiana to this day as Multiracial Americans.[14][15]

Louisiana was not the only place where Filipinos jumped ship. Others deserted and found homes in various parts of Mexico where many assimilated easily because of their fluency in Spanish.