Spanair Flight JK 5022, from Barajas Airport in Madrid to Gran Canaria Airport in Gran Canaria, Spain, crashed just after take off from runway 36L of Barajas Airport at 14:24 CEST (12:24 UTC) on 20 August 2008. The aircraft was a McDonnell Douglas MD-82, registration EC-HFP. It was the first fatal accident for Spanair (part of the SAS Group) in the 20-year history of the company, and the 14th fatal accident and 24th hull loss involving MD-80 series aircraft. It was the world's deadliest aviation accident in 2008 and Spain's deadliest in 25 years.[1] 154 people died; six died en route to the hospital, one died overnight and one died in the hospital three days later. Only 18 people survived.[2][3] 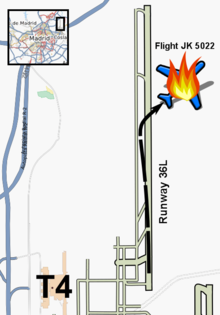 The aircraft, christened Sunbreeze (registration EC-HFP;[4] manufacturer's serial number 53148; Douglas line number 2142)[5] had been delivered to Korean Air on 18 November 1993 and was acquired by Spanair in July 1999.

The flight was a Star Alliance codeshare operated on behalf of Lufthansa as LH 2554.[6] When it took off it was carrying 166 passengers and six crew members.[7]

The accident occurred as the aircraft attempted to take off, at 14:24 local time,[8][4] because the pilots had omitted to deploy the flaps and slats ready for take-off.[9][10] Without the use of these "high-lift" devices, the wings did not generate enough lift to keep the aircraft in the air.[Note 1] The MD-82 has a warning system (TOWS - Take-Off Warning System) that should have alerted the pilots, as they commenced their take-off run, that the plane was incorrectly configured for take-off.[Note 2] However, TOWS did not sound a warning, and the pilots continued with the fateful take-off attempt. The aircraft left the ground momentarily, rolled to the right,[11] and crashed in the vicinity of the runway, breaking into at least two parts which were engulfed by the subsequent fire.

Spanair reported that the pilot had previously attempted and aborted a departure due to a sensor reporting excessive temperature in an air intake, and that the temperature sensor was de-activated on the ground (reportedly an established procedure since that sensor is redundant), delaying departure by over an hour.[12] Another takeoff was attempted, during which the fatal accident occurred.[13]

Of the 172 people on board, 146, including all crew members, perished in the crash or immediately after in the fire;[citation needed] of the 26 passengers rescued alive from the crash site, six died before arriving at the hospital, and two more in hospital, bringing the total number of fatalities to 154.[14][13][15][16][17][2][18]

Ervigio Corral, the head of the emergency services rescue team, said that the crash flung some of the survivors into a creek, lessening the severity of their burns.[19] A 30 year old woman with British and Spanish dual citizenship survived with no burns as she was flung from row 6, still attached to her seat, and landed in a nearby stream. She suffered a punctured lung and broken left arm. Because of this ejection, she did not receive burns that the majority of the other passengers suffered.[20] 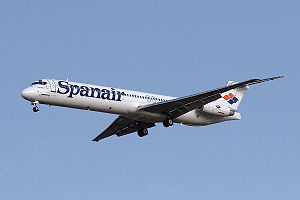 Sunbreeze, in an earlier standard Spanair livery, at Madrid on 10 October 2007.

A preliminary report on the accident was released by CIAIAC on 6 October.[21] Flight data recorders showed that the aircraft had taken off with flaps at 0°, and that the alarm for that abnormal takeoff configuration had not sounded. The report hinted at no other cause of the accident. Both the engines and thrust reversers were excluded as causes of the accident.

On 17 August 2009, CIAIAC released an interim report on the incident.[22] The interim report confirmed the preliminary report's conclusion that the crash was caused by an attempt to take off with the flaps and slats retracted, which constituted an improper configuration, and noted that safeguards that should have prevented the crash failed to do so. The cockpit recordings revealed that the pilots omitted the "set and check the flap/slat lever and lights" item in the After Start checklist. In the Takeoff Imminent verification checklist the copilot just repeats the flaps and slats correct values without actually checking them, as shown by the physical evidence. All three safety barriers provided to avoid the takeoff in an inappropriate configuration were defeated: the configuration checklist, the confirm and verify checklist, and Take-off Warning System (TOWS). The report also made a number of safety recommendations intended to prevent incidents like this from happening again.[23]

Some early eye-witness accounts had suggested that the aircraft had suffered an engine fire or explosion before crashing, but the Spanish airport authority AENA released a video showing that the engines neither exploded nor caught fire during take-off.[25][26] Manuel Bautista, Director General of Spain's civil aviation authority, went as far as to state: "The engine is not the cause of the accident",[25] surmising that a chain of events combining together was more likely than a single cause.[27]

There has been considerable interest in the faulty air temperature probe (the total air temperature sensor,[Note 3] located on the front of the aircraft near the cockpit) that initially caused the pilot to turn the plane back for maintenance before its catastrophic takeoff attempt.[28] The maintenance logbook shows that overheating of the air temperature sensor occurred repeatedly the day before the crash.[citation needed] The mechanic simply deactivated the probe because the aircraft's Minimum Equipment List allowed it to be left inoperative. On 22 August investigators interviewed the mechanic, who defended his action by saying that it had nothing to do with the crash. Spanair has supported the mechanic's view that deactivation of the probe is an accepted procedure.[29] On 1 September a report, quoting Spanair, stated that the problem detected on the first takeoff attempt was overheating caused by a temperature gauge's de-icing system, rather than a dysfunction of the temperature gauge itself and that since icing was not a risk on that flight, that the de-icing system had been deactivated by the mechanic with captain's approval.[30]

On 11 May 2010, details from the cockpit voice recorder were leaked to the public and released by Spanish media. The recording showed that both pilots were concerned about a repair job performed earlier the day of the crash, in which mechanics used an ice pack to cool an overheating temperature sensor and removed a fuse.[31] The BBC reported that the judge investigating the crash was to question three mechanics on suspicion of manslaughter. These were the two mechanics who checked the plane before take-off and the head of maintenance for Spanair at Barajas.[32]

Rumours suggested that investigators were focusing on the possibility that the thrust reverser of the No. 2 (right side) engine activated during the climb[citation needed], similar to Lauda Air Flight 004 in 1991, since it was found to be in the deployed position in the wreckage. Indeed one of the photographs[33] released on the day of the accident appears to show a deployed reverser. If the reverser deployed during takeoff, and not as a result of impact, it has been suggested that the plane would have yawed suddenly to the right.[34] Since the MD-82 has tail-mounted engines, however, positioned quite close to each other, and close to the plane's longitudinal axis, the activation of a reverser may not have produced uncontrollable yaw, even though the situation may still have been critical.[35] Thrust reversers are normally employed just after touch down to reduce braking distances.[36] Evidence which has more recently come to light suggests that the aircraft took to the sky with a known pre-existing problem with one of its thrust reversers, which was the subject of a temporary "work around" to keep the aircraft operational.[37] On 7 September, El Mundo reported that the thrust reverser deployment was commanded after the crash, to bring the aircraft to a stop; the left reverser deployed normally, while the right one (with the pre-existing condition) did not.[citation needed] If this last suggestion is accepted, then the deployment of one or both thrust reversers, deliberate or otherwise, would not appear to be the direct cause of the crash.[citation needed]

El Mundo, citing a source in the investigation team,[who?] reported that the cockpit voice recorder showed that the pilot had said "Flaps OK, Slats OK" to the co-pilot.[38] The article confirmed that the flaps had not been extended and that the alarm for that condition had not sounded.[39] The final report concluded that the failure to deploy flaps was the cause of the accident. The pilots stated they checked the flaps while reviewing the pre-flight checklist,[dubious – discuss] but did not actually test them. The warning signal that the flaps were not set failed to sound for unknown reasons.

The maintenance logbook of the airplane has comments, 2 days before the crash, for an "autoslats failure" visual alarm occurring on slats extension; however autoslats are not used on takeoff, and it can not be inferred that the slats system had a defect.[40]

In an article published on 7 September, El Mundo stated that during the flight preparation and takeoff attempts, the aircraft had some of its systems in flight mode rather than ground mode. If true, this might explain why de-icing of the Total Air Temperature probe activated on the ground, causing overheat, since in flight the heater would activate only when there was no air flow in the probe, a sign of icing. This might also explain why the flaps and slats alarm had not sounded, since this alarm is disabled in flight mode.[41][42]

Spanish daily El Pais reports that malware which had infected the airline's central computer system resulted in a failure to raise an alarm over multiple problems with the plane. An internal report issued by the airline revealed that their central computer system used to monitor technical problems with the aircraft was infected with malware and may have prevented the detection of technical problems with the aircraft. A judge has ordered Spanair to provide all of the computer's logs from the days before and after the crash. [43] [44][45]

The CIAIAC published its final report into the accident on 26 July 2011.[9]

It determined that the cause of the accident was:

In the case of Northwest Airlines Flight 255, also an MD-82, the crew had similarly been disrupted from routine operation before the fatal takeoff, and the alarm similarly had not sounded. In that accident, the reason for the lack of TOWS alarm was a tripped (or pulled) circuit breaker. However, examination of the alarm and its circuit breaker in Spanair 5022 had not revealed any fault.[47][48]