Masinissa (c. 240 or 238 BC - c. 148 BC) — also spelled Massinissa and Massena — was the first King of Numidia, an ancient North African nation of ancient Libyan tribes. As a successful general, Masinissa fought in the Second Punic War (218-201 BC), first against the Romans as an ally of Carthage an later switching sides when he saw which way the conflict was going. With Roman help, he united the tribes and founded the kingdom. He is most famous for his role as a Roman ally in the Battle of Zama (202 BC) in Ancient Algeria which ended the war and as husband of Sophonisba, a Carthaginian noblewoman whom he allowed to poison herself to avoid being paraded in a triumph in Rome.

Masinissa was the son of the chieftain Gala of a Numidian tribal group, the Massylii. He was brought up in Carthage, an ally of his father. At the start of the Second Punic War (218-201 BC), Masinissa fought for Carthage against Syphax, the King of the Masaesyli of western Numidia (present day Algeria), who had allied himself with the Romans. Masinissa, then 17 years old, led an army of Numidian troops and Carthaginian auxiliaries against Syphax's army and won a decisive victory.

After his victory over Syphax, Masinissa commanded his skilled Numidian cavalry against the Romans in Spain, where he was involved in the Carthaginian victories of Castulo and Ilorca (both 211). After Hasdrubal Barca departed for Italy, Masinissa was placed in command of all the Carthaginian cavalry in Spain, where he fought a successful guerrilla campaign against the Roman general Publius Cornelius Scipio (Scipio Africanus) throughout 208 and 207, while Mago Barca and Hasdrubal Gisgo levied and trained new forces. In 206, with fresh reinforcements, Mago and Hasdrubal Gisgo — supported by Masinissa's Numidian cavalry — met Scipio at the Battle of Ilipa, where Carthage's power in Spain was finally broken in arguably Scipio Africanus's most brilliant victory.

When Gaia died in 206, his sons Masinissa and Oezalces quarreled about the inheritance, and Syphax — now an ally of Carthage — was able to conquer considerable parts of the eastern Numidian kingdom. Meanwhile, with the Carthaginians having been driven from Spain, Masinissa concluded that Rome was winning the war against Carthage and therefore decided to defect to Rome. he promised to assist Scipio in the invasion of Carthaginian territory in Africa. This decision was aided by the move by Scipio Africanus to free Masinissa's nephew, Massiva, whom the Romans had captured when he had disobeyed his uncle and ridden into battle. Having lost the alliance with Masinissa, Hasdrubal started to look for another ally, which he found in Syphax, who married Sophonisba, Hasdrubal's daughter who until the defection had been betrothed to Masinissa. The Romans supported Masinissa's claim to the Numidian throne against Syphax, who was nevertheless successful in driving Masinissa from power until Scipio invaded Africa in 204. Masinissa joined the Roman forces and participated in the victorious Battle of the Great Plains (203), after which Syphax was captured.

At the Battle of Bagbrades (203), Scipio overcame Hasdrubal and Syphax and while the Roman general concentrated on Carthage, Gaius Laelius and Masinissa followed Syphax to Cirta, where he was captured and handed over to Scipio. After the defeat of Syphax, Masinissa married Syphax's wife Sophonisba, but Scipio, suspicious of her loyalty, demanded that she be taken to Rome and appear in the triumphal parade. To save her from such humiliation, Masinissa sent her poison, with which she killed herself. Masinissa was now accepted as a loyal ally of Rome, and was confirmed by Scipio as the king of the Massyli.

In the Battle of Zama (202) (near modern-day Maktar, Tunisia) Masinissa commanded the cavalry (6,000 Numidian and 3,000 Roman) on Scipio's right wing, Scipio delayed the engagement for long enough to allow for Masinissa to join him. With the battle hanging in the balance, Masinissa's cavalry, having driven the fleeing Carthaginian horsemen away, returned and immediately fell onto the rear of the Carthaginian lines. This decided the battle and at once Hannibal's army began to collapse. The Second Punic War was over and for his services Masinissa received the kingdom of Syphax, and became king of Numidia.

Masinissa was now king of both the Massylii and the Masaesyli. He showed unconditional loyalty to Rome, and his position in Africa was strengthened by a clause in the peace treaty of 201 between Rome and Carthage prohibiting the latter from going to war even in self-defense without Roman permission. This enabled Masinissa to encroach on the remaining Carthaginian territory as long as he judged that Rome wished to see Carthage further weakened. 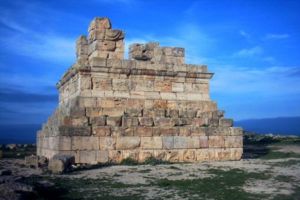 With Roman backing Masinissa established his own kingdom of Numidia, west of Carthage, with Cirta — present day Constantine — as its capital city. All of this happened in accordance with Roman interest, as they wanted to give Carthage more problems with its neighbours. Masinissa’s chief aim was to build a strong and unified state from the semi-nomadic Numidian tribes. To this end he introduced Carthaginian agricultural techniques and forced many Numidians to settle as peasant farmers. Masinissa and his sons possessed large estates throughout Numidia, to the extent that Roman authors attributed to him, quite falsely, the sedentarization of the Numidians. Major towns included Capsa, Thugga (modern Dougga), Bulla Regia and Hippo Regius.

All through his reign, Masinissa extended his territory, and he was cooperating with Rome when, towards the end of his life, he provoked Carthage to go to war against him. Any hopes he may have had of extending his rule right across North Africa were dashed, however, when a Roman commission headed by the elderly Marcus Porcius Cato (Cato the Elder) came to Africa about 155 to decide a territorial dispute between Masinissa and Carthage. Animated probably by an irrational fear of a Carthaginian revival, but possibly by suspicion of Masinissa’s ambitions, Cato thenceforward advocated, finally with success, the destruction of Carthage. Based on descriptions from Livy, the Numidians began raiding around seventy towns in the southern and western sections of Carthage's remaining territory. Outraged with their conduct, Carthage went to war against them, in defiance of the Roman treaty forbidding them to make war on anyone, thus precipitating the Third Punic War (149-146). Masinissa showed his displeasure when the Roman army arrived in Africa in 149, but he died early in 148 without a breach in the alliance. Ancient accounts suggest Masinissa lived beyond the age of 90 and was apparently still personally leading the armies of his kingdom when he died.

After his death, Numidia was divided into several smaller kingdoms ruled by his sons. His descendants were the elder Juba I of Numidia (85 BCE–46 BCE) and younger Juba II (52 BCE-23 CE).

In literature, art and film