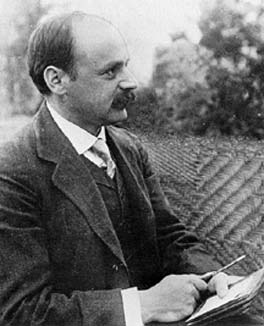 He was born in . He was something of a child prodigy, having a paper on published when he was only sixteen. He studied at and , obtaining his doctorate in 1896 for a work on 's theories.

From 1897, he worked as assistant at the [http://kuffner-sternwarte.at/sternwarte/vks_ksw.html Kuffner Sternwarte] (Observatory) in Vienna, where he developed a formula to calculate the optical density of photographic material. It involved an exponent now known as the , which is the in the formula:

(where is optical density of exposed photographic emulsion, a function of , the intensity of the source being observed, and , the exposure time, with a constant). This formula was important for enabling more accurate photographic measurements of the intensities of faint astronomical sources.

From 1901 until 1909 he was a professor at the prestigious institute at , where he had the opportunity to work with some significant figures including and . Schwarzschild became the director of the observatory in Göttingen. He moved to a post at the Astrophysical Observatory in in 1909.

At the outbreak of in 1914 he joined the German army despite being over 40 years old. He served on both the western and eastern fronts, rising to the rank of lieutenant in the artillery.

While serving on the front in Russia in 1915, he began to suffer from a rare and painful skin disease called . Nevertheless, he managed to write three outstanding papers, two on and one on quantum theory. His papers on relativity produced the first exact solutions to the , and a minor modifaction of these results gives the well-known solution that now bears his name: the .

Einstein himself was pleasantly surprised to learn that the field equations admitted exact solutions, because of their prima facie complexity, and because he himself had only produced an approximate solution. Einstein's approximate solution was given in his famous 1915 article on the advance of the perihelion of Mercury. There, Einstein used rectangular coordinates to approximate the gravitational field around a spherically symmetric, non-rotating, non-charged mass. Schwarzschild, in contrast, chose a more elegant "polar-like" coordinate system and was able to produce an exact solution. In 1916, Einstein wrote to Schwarzschild on this result:

Schwarzschild's first (spherically symmetric) solution contains a coordinate singularity on a surface that is now named after him. In Schwarzschild coordinates, this singularity lies on the sphere of points at a particular radius, called the :

Thousands of dissertations, articles, and books have since been devoted to the study of Schwarzschild's solutions to the . However, although Schwarzschild's best known work lies in the area of , his research interests were extremely broad, including work in , observational stellar , , instrumental , stellar structure, stellar , , and . [Eisenstaedt, “The Early Interpretation of the Schwarzschild Solution,” in D. Howard and J. Stachel (eds), Einstein and the History of General Relativity: Einstein Studies, Vol. 1, pp. 213-234. Boston: Birkhauser, 1989.]

Some of his particular achievements include measurements of s, using photography, and the improvement of optical systems, through the perturbative investigation of geometrical aberrations.

Schwarzschild's struggle with may have eventually led to his death. He died on May 11, 1916.

*
* Roberto B. Salgado [http://www.phy.syr.edu/courses/modules/LIGHTCONE/schwarzschild.html The Light Cone: The Schwarzschild Black Hole]
* [http://adsabs.harvard.edu/cgi-bin/nph-bib_query?bibcode=1917ApJ....45..285H Obituary in the Astrophysical Journal] , written by
*