Quadrophenia is the sixth studio album by English rock band The Who. Released on 19 October 1973 by Track and Polydor in the UK, and Track and MCA in the US, it is a double album, and the group's second rock opera. Its story involves social, musical and psychological happenings from an English teenage perspective, set in London and Brighton in 1964 and '65.

The name is a variation on the popular usage of the medical diagnostic term schizophrenia as dissociative identity disorder to reflect the four distinct personalities of Jimmy, the opera's protagonist – each said to represent the personality of one member of The Who.

During the album production Townshend made many field recordings with a portable reel-to-reel recorder. Some of the location sounds that made it to the record were waves washing on the beach and a train whistle. The ending of "The Dirty Jobs" also includes a musical excerpt from The Thunderer, a march by John Philip Sousa. Townshend recorded this while listening to a brass band perform at a park.

Quadrophenia was originally released as a two-LP set with a gatefold jacket and a thick booklet containing lyrics, a text version of the story, and photographs illustrating the tale. MCA Records re-released it as a two-CD set in 1985 with the lyrics and text story line on a thin fold-up sheet but none of the photographs. The original Polydor CD issue included the complete booklet in miniature, as did the remastered MCA and Polydor CD reissues of 1996.

Quadrophenia was originally released in the U.K. as Track 2406-110/111[1] on 26 October 1973. However, it appears that owing to a vinyl shortage caused by the OPEC oil embargo, only a limited number of copies got to stores before production had to be halted. Most British Who fans failed to find a copy until after The Who's U.K. tour. In the U.K., Quadrophenia reached the #2 position, being held out of the top spot by David Bowie's Pin Ups, which contained cover versions of The Who songs "I Can't Explain" and "Anyway, Anyhow, Anywhere".

In the liner notes to the remastered Odds & Sods Townshend revealed that Quadrophenia evolved from an idea for a self-indulgent autobiography of the band (which was allegedly to have been titled Rock Is Dead—Long Live Rock!). Two of the opera's tracks date from 1972 ("Is It In My Head?" and "Love Reign O'er Me"), a year that also produced The Who's singles "Join Together", "Relay" and "Long Live Rock" (the last not actually released until 1974). However, by the time Quadrophenia was released, the band's role in the story was only symbolic, through Jimmy's four personalities.

The 8-track tape version of this album has the distinction of being one of the few 8-tracks that is arranged exactly like the album, with no song breaks.

Quadrophenia reached #2 on the US Billboard album chart (kept from #1 by then-labelmate Elton John with his Goodbye Yellow Brick Road album) and was the highest position of any Who album in the US as they would never hit #1 on the US album charts.[2]

The band viewed the tour in support of the album as disastrous. Owing to extensive use of synthesisers and sound effects on the record, the group elected to employ taped backing tracks for live performance, as they had already done for "Baba O'Riley" and "Won't Get Fooled Again". Initial performances were plagued by malfunctioning tapes. Once the tapes started, the band had to play to them. The band felt constrained in playing to these recordings, preferring a more free-form attitude.[3]

On the first night of the US leg at the Cow Palace in San Francisco, drummer Keith Moon collapsed onstage. Scot Halpin, an audience member, was brought on to finish the show.

Pete Townshend now looks back on the album with great pride. "The music is the best music that I've ever written, I think, and it's the best album that I will ever write".[3][4]

On 1 June 2011, Townshend stated in a blog entry on The Who's official website that he had begun working on a deluxe edition of the album to be released later this year. 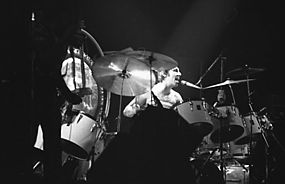 Moon in one of his few lead vocal roles, singing "Bell Boy" in Quadrophenia

Townshend noted in 2009 that, rather than Jimmy’s personalities representing a Who member, he chose the personalities of each member to illustrate each of Jimmy’s four personalities, or "personality extremes" or mood swings.[3]

The liner notes illustrate this concept as follows (names added):

In addition to describing a personality/band member, the four descriptions refer to four musical themes that portray Jimmy's personalities in the opera: "Helpless Dancer", "Is It Me?", "Bell Boy", and "Love Reign O'er Me". The four themes (or "leitmotifs" as described by Townshend) are mixed together in both the title track (bridging "The Real Me" and "Cut My Hair"), and the penultimate track, "The Rock" (bridging "Doctor Jimmy" and "Love, Reign O'er Me"). The two pieces were the most musically complex pieces that Townshend ever wrote for The Who, combining all four themes into two six-minute instrumental medleys. The two pieces have neither a definite beginning or end, as they begin with a fade-in from the previous track, starting with the theme of "Bell Boy" (Moon's theme). This is followed by the themes of "Is It Me?" (Entwistle's theme), "Helpless Dancer" (Daltrey's theme), and "Love, Reign O'er Me" (Townshend's theme). "Quadrophenia" fades into rain sound effects after the "Love Reign O'er Me" theme. "The Rock" however ends with a combination of the four different themes, using the "Bell Boy" theme as the chord sequence, the "Helpless Dancer" theme as the melody, the "Is It Me?" theme as a lead (played on guitar and synthesiser), and the keyboard part to "Love Reign O'er Me" as a countermelody. The whole song abruptly ends on a downbeat layered with the sound of thunder and descends into "Love Reign O'er Me" proper.

The four themes also surface on many other songs throughout the album; the most subtle example being when the "Helpless Dancer" theme appears on "Bell Boy" (the main song) played on synthesiser as a brief interlude. Some themes from other songs also make "surprise" reappearances here and there. These leitmotifs help give the work an impression of a cohesive unity.

PopMatters gives Quadrophenia a favourable rating.[5] Allmusic gives it 4.5 out of 5 stars.[6] Rolling Stone magazine also gives it 4.5 out of 5 stars.[7] The BBC rates the album as favourable.[8] Music critic Robert Christgau gives the album an A- rating.[9] In 2000 Q magazine placed Quadrophenia at number 56 in its list of the 100 Greatest British Albums Ever. In 2001, the TV network VH1 named it the 86th greatest album of all time. In 2003, the album was ranked number 266 on Rolling Stone magazine's list of the 500 greatest albums of all time. IGN placed Quadrophenia at number 1 in their list of the greatest classic rock albums of all time.[10]

The original mix had many of the vocals mixed a bit low and Daltrey was quoted at the time complaining. The initial CD release used the same original mix, but the album was remixed in 1996 bringing the vocals up, with good results, but some Who fans still prefer the original mix. According to the band's website, Townshend is remixing the album yet again, with a projected deluxe box-set release for November 15, 2011.

In 1979 the film Quadrophenia was released, with three additional songs written by Townshend (see Quadrophenia (soundtrack)). The film was an accurate visual interpretation of Townshend's vision of Jimmy and his surroundings, and included the casting of a young Sting as the Ace Face. In the film, the music was largely relegated to the background, and was not performed by the cast as in a rock opera.

In 1995, popular rock group Phish performed Quadrophenia in its entirety as their second Halloween 'musical costume' at the Rosemont Horizon, Chicago, Illinois. The recording was later released as a part of Live Phish Volume 14. The jam band also covered the tracks "Drowned" and "Sea and Sand" on their live album New Year's Eve 1995 – Live at Madison Square Garden, and have played an extended version of "Drowned" in several of their concerts since.

In summer 1996, The Who, with a large backing group featuring, among others, Zak Starkey on drums (his first appearance as The Who's drummer), Geoff Whitehorn and Simon Townshend on electric guitar (the former played lead guitar on almost all of the songs) and keyboardists Jon Carin and John "Rabbit" Bundrick, performed Quadrophenia in its entirety for the first time in many years in London's Hyde Park, with guest performers Phil Daniels as the Narrator/Jimmy, Gary Glitter as The Rocker, Adrian Edmonson as the Ace Face/Bellboy, Stephen Fry as the hotel manager (screaming, "Bellboy!"), Trevor McDonald as the newsreader and Pink Floyd's David Gilmour as the bus driver. Gilmour also played additional lead guitar for that first performance; he sang and played lead guitar on "The Dirty Jobs", plus performed lead guitar on "Sea and Sand", "Dr. Jimmy", "The Rock", "Love, Reign O'er Me", and "5.15" (reprise). For the subsequent extensive tour of the UK and the US, Daniels was replaced and Gilmour's role was taken over by Simon Townshend. Gary Glitter and P.J. Proby (subsequently) made guest appearances as The Godfather, and Billy Idol (William Michael Albert Broad) also guested as the Ace Face/Bellboy, also subsequently being replaced.

In 2005, a live performance of Quadrophenia from The Who's 1996/1997 tour was included in a three-disc DVD box set released by Rhino Entertainment, also featuring a live performance of Tommy from 1989 as well as other hit songs performed live. Townshend and Daltrey provided special commentary, and an interview with Billy Idol was also included.

In February 2007, students from the Royal Welsh College of Music & Drama staged "the first independent theatrical production (of Quadrophenia) blessed by Pete Townshend" at the Sherman Theatre in Cardiff, Wales.[11]

This production has been reworked, recast and expanded by Director Tom Critchley and writer Jeff Young into a full scale UK Tour starting at the Theatre Royal, Plymouth in May 2009.

The Who performed Quadrophenia at the Royal Albert Hall on 30 March 2010 as part of the Teenage Cancer Trust series of ten gigs. This one-off performance of the rock opera featured guest appearances from Eddie Vedder, lead singer of Pearl Jam; and Kasabian's Tom Meighan.[12] Tom Norris, jazz musician and violinist with the London Symphony Orchestra, played violin in the production.[13]

All songs written and composed by Pete Townshend.

On 15 November 2011, a deluxe edition of Quadrophenia is set to be released.[14] The release will also be available on Double vinyl, Mini-Deluxe Digi-Pak edition, and as a digital release.