Molossians
For the micronation of Molossia, see Republic of Molossia. 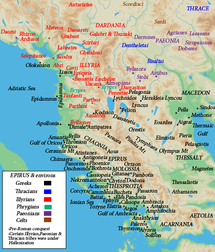 Tribes of Epirus in antiquity.

The Molossians (Greek: Μολοσσοί, Molossoi) were an ancient Greek tribe that inhabited the region of Epirus since the Mycenaean era.[1] On their northeast frontier they had the Chaonians and to their southern frontier the kingdom of the Thesprotians, to their north were the Illyrians. The Molossians were part of the League of Epirus until they sided against Rome in the Third Macedonian War (171 BC-168 BC). The result was disastrous with the vengeful Romans enslaving 150,000 of its inhabitants and annexing the region into the Roman Empire.

According to Greek mythology, the Molossians were the descendants of Molossus, one of the three sons of Neoptolemus, son of Achilles and Deidamia. Following the sack of Troy, Neoptolemus and his armies settled in Epirus where they joined with the local population. Molossus inherited the kingdom of Epirus after the death of Helenus, son of Priam and Hecuba of Troy, who had married his erstwhile sister-in-law Andromache after Neoptolemus' death. Plutarch tells us that according to some historians their first king was Phaethon, one of those who came into Epirus with Pelasgus. Plutarch also says, that Deucalion and Pyrrha, having set up the worship of Zeus at Dodona, settled there among the Molossians.[2]

The Molossians were also renowned for their vicious hounds, which were used by shepherds to guard their flocks. This is where the canine breed Molossoid, native to Greece, got its name. Virgil tells us that in ancient Greece the heavier Molossian dogs were often used by the Greeks and Romans for hunting (canis venaticus) and to watch over the house and livestock (canis pastoralis). "Never, with them on guard," says Virgil, "need you fear for your stalls a midnight thief, or onslaught of wolves, or Iberian brigands at your back."

The most famed member of the Molossian dynasty was Pyrrhus, who became famous for his Pyrrhic victory over the Romans. According to Plutarch, Pyrrhus was the son of Aeacides of Epirus and a Greek woman from Thessaly named Phthia, the daughter of a war hero in the Lamian War. Pyrrhus was a second cousin of Alexander the Great. In the 4th century BC, they had adopted the term for office of prostatai (Greek: προστάται)[4] literally meaning "protectors" like most Greek tribal states at the time. Other terms for office were grammateus (Greek: γραμματεύς) meaning "secretary", demiourgoi (Greek: δημιουργοί) literally meaning "creators", hieromnemones (Greek: ἱερομνήμονες) literally meaning "of the sacred memory" and synarchontes (Greek: συνάρχοντες) literally meaning "co-rulers"[5] An inscription from the 4th century stated (referring to Alexander I of Epirus):[6]

Dodona was used for the display of public decisions.[7] Despite having a monarchy, the Molossians sent princes[8] to Athens to learn of democracy as they did not consider monarchy and certain aspects of democracy as opposite concepts.[9]

Olympias, the mother of Alexander the Great, was a member of this celebrated sovereign house.

In 385 BC, the Molossians were attacked by Illyrians instigated and aided by Dionysius of Syracuse to place Alcetas that was a refugee in his court to the throne.[10] Dionysius planned to control all the Ionian Sea. Sparta intervened[11] as soon as the events became known and expelled[12] the Illyrians who were led by Bardyllis.[13] Despite being aided by 2000 Greek hoplites and 500 suits of Greek armour, the Illyrians were defeated by the Spartans (led by Agesilaus) but not before ravaging the region and killing 15,000 Molossians.[13]

In another Illyrian attack in 360 BC, the Molossian king Arymbas (or Arybbas) evacuated his non-combatant population to Aetolia and let the Illyrians loot freely. The stratagem worked and the Molossians fell upon the Illyrians now encumbered with booty and defeated them.[13][14]