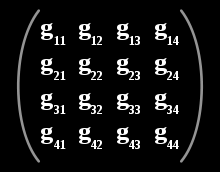 Metric tensor of spacetime in general relativity written as a matrix.

In general relativity, the metric tensor (or simply, the metric) is the fundamental object of study. It may loosely be thought of as a generalization of the gravitational field familiar from Newtonian gravitation. The metric captures all the geometric and causal structure of spacetime, being used to define notions such as distance, volume, curvature, angle, future and past.

Notation and conventions: Throughout this article we work with a metric signature that is mostly positive (− + + +); see sign convention. As is customary in relativity, units are used where the speed of light c = 1. The gravitation constant G will be kept explicit. The summation convention, where repeated indices are automatically summed over, is employed.

Mathematically, spacetime is represented by a 4-dimensional differentiable manifold M and the metric is given as a covariant, second-rank, symmetric tensor on M, conventionally denoted by g. Moreover the metric is required to be nondegenerate with signature (-+++). A manifold M equipped with such a metric is called a Lorentzian manifold.

Explicitly, the metric is a symmetric bilinear form on each tangent space of M which varies in a smooth (or differentiable) manner from point to point. Given two tangent vectors u and v at a point x in M, the metric can be evaluated on u and v to give a real number:

The factors dxμ are one-form gradients of the scalar coordinate fields xμ. The metric is thus a linear combination of tensor products of one-form gradients of coordinates. The coefficients gμν are a set of 16 real-valued functions (since the tensor g is actually a tensor field defined at all points of a spacetime manifold). In order for the metric to be symmetric we must have

giving 10 independent coefficients. If we denote the symmetric tensor product by juxtaposition (so that dxμdxν = dxνdxμ) we can write the metric in the form

If the local coordinates are specified, or understood from context, the metric can be written as a 4×4 symmetric matrix with entries gμν. The nondegeneracy of gμν means that this matrix is non-singular (i.e. has non-vanishing determinant), while the Lorentzian signature of g implies that the matrix has one negative and three positive eigenvalues. Note that physicists often refer to this matrix or the coordinates gμν themselves as the metric (see, however, abstract index notation).

In general relativity, the terms metric and line element are often used interchangeably.

The line element ds2 imparts information about the causal structure of the spacetime. When ds2 < 0, the interval is timelike and the square root of the absolute value of ds2 is an incremental proper time. Only timelike intervals can be physically traversed by a massive object. When ds2 = 0, the interval is lightlike, and can only be traversed by light. When ds2 > 0, the interval is spacelike and the square root of ds2 acts as an incremental proper length. Spacelike intervals cannot be traversed, since they connect events that are out of each other's light cones. Events can be causally related only if they are within each other's light cones.

The metric components obviously depend on the chosen local coordinate system. Under a change of coordinates

the metric components transform as

The simplest example of a Lorentzian manifold is flat spacetime which can be given as R4 with coordinates (t,x,y,z) and the metric

Note that these coordinates actually cover all of R4. The flat space metric (or Minkowski metric) is often denoted by the symbol η and is the metric used in special relativity. In the above coordinates, the matrix representation of η is

is the standard metric on the 2-sphere.

The metric g defines a natural volume form, which can be used to integrate over spacetimes. In local coordinates xμ of a manifold, the volume form can be written

where det g is the determinant of the matrix of components of the metric tensor for the given coordinate system.

The metric g completely determines the curvature of spacetime. According to the fundamental theorem of Riemannian geometry, there is a unique connection ∇ on any semi-Riemannian manifold that is compatible with the metric and torsion-free. This connection is called the Levi-Civita connection. The Christoffel symbols of this connection are given in terms of partial derivatives of the metric in local coordinates xμ by the formula

The curvature of spacetime is then given by the Riemann curvature tensor which is defined in terms of the Levi-Civita connection ∇. In local coordinates this tensor is given by:

The curvature is then expressible purely in terms of the metric g and its derivatives.

One of the core ideas of general relativity is that the metric (and the associated geometry of spacetime) is determined by the matter and energy content of spacetime. Einstein's field equations:

relate the metric (and the associated curvature tensors) to the stress-energy tensor Tμν. This tensor equation is a complicated set of nonlinear partial differential equations for the metric components. Exact solutions of Einstein's field equations are very difficult to find.

See general relativity resources for a list of references.