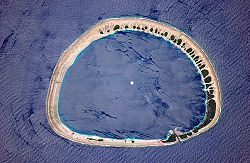 Nukuoro is an atoll in the Federated States of Micronesia.

It is a municipality of the state of Pohnpei, Federated States of Micronesia. Except for Kapingamarangi, it is the southermost atoll of the country. Nukuoro has a population of 372 (as of 2007), though several hundred Nukuorans live on Pohnpei. The total area, including the lagoon, is 40 km², with a land area of only 1.7 km², which is divided among more than 40 islets that lie on the northern, eastern and southern sides of the lagoon. By far the largest islet is Nukuoro islet, which is the center of population and the capital of the municipality.

The inhabitants speak Nukuoro language, which is closely related to the Kapingamarangi language and is a Polynesian dialect related to Tokelauan. Nukuoro and Kapingamarangi constitute parts of the "Polynesian outlier" cultures lying well outside the Polynesian Triangle. Locals tell that the first people who came to settle on Nukuoro in the 18th century were from [Tokelau] in the South Pacific, a man and crew of six from Tokelau.[1] (Matagi Tokelau, History and Traditions of Tokelau, p.82-83).

The lagoon is 6 kilometers (about 3.7 miles) in diameter. Fishing, animal husbandry, and agriculture (taro and copra) are the main occupations. A recent project to farm black pearl oysters has been successful at generating additional income for the island's people. Nukuoro is remote. It has no airstrip, and a passenger boat calls irregularly only once every few months. The island has no tourism except for the occasional visit by passing sailing yachts. There is a 4 room schoolhouse but children over the age of 14 must travel to Pohnpei to attend high school.