The airport is named after former MP Norman McLeod Rogers (Kingston and the Islands 1935–1940), Minister of Labour and then National Defence in Prime Minister William Lyon Mackenzie King's cabinet. Rogers died in a plane crash on June 10, 1940 while flying from Ottawa to Toronto for a speaking engagement.

Before 1940, Kingston was served only by the Kingston Airfield, a grass strip just north of the city's downtown, which closed in 1942. In 1940, during the Second World War, an airfield was built to the west of Kingston to serve as a training station for the Royal Air Force's No. 31 Service Flying Training School (SFTS). The school provided advanced flight training in Battle and Harvard aircraft. In 1942 the school became part of the British Commonwealth Air Training Plan (BCATP). The BCATP's No. 14 Service Flying Training School moved to Kingston in 1944 and merged with the RAF school. No. 14 SFTS used Harvards, Yales and Ansons. A decommissioned yellow Harvard aircraft now stands on a pedestal near the airport entrance to commemorate the airport's wartime role. The airport was transferred to city control in 1972.

The airport's runway outline displays the classic BCATP triangle pattern. Originally, the airport had three 500 ft (150 m) runways. Later, runway 01/19 was extended northwards to a length of 5,000 ft (1,500 m) to handle larger aircraft (the prevailing wind is from the south off Lake Ontario), and runway 07/25 was extended northeastwards to a length of nearly 4,000 ft (1,200 m). The remaining runway, 12/30, was decommissioned in 2003 and converted to a taxiway. 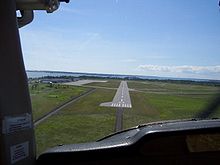 Norman Rogers is a mandatory frequency airport with an operating Flight Service Station. The airport also supports a large amount of general aviation traffic including flight training, and general recreational flying. As one of the only public airports to offer an ILS approach along the corridor between Montreal and Toronto (along with Ottawa), the Kingston airport is an important alternate during low weather conditions. 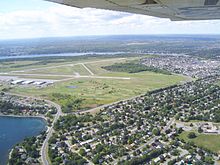 Kingston Airport from the air

The Ontario Fun Flyers flight school and the Kingston Flying Club are also located on the field.

The airport is classified as an airport of entry by NAV CANADA and is staffed by the Canada Border Services Agency. CBSA officers at this airport currently can handle aircraft with no more than 30 passengers.[1]