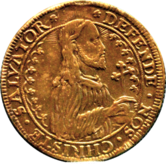 Thaler issued by Danzig during its siege in 1577, Jesus Christe on obverse instead of King Stefan Batory

The rebellion of the city of Danzig (Gdańsk) in 1570s against the election and rule of Polish King and Grand Duke of Lithuania Stephen Báthory began on 12 December 1575 (when Emperor Maximillian was announced as a King) and ended on 16 December 1577.[1] Maximilian's II death in fall of 1576 weakened Danzig's position and made the conflict less about the recognition of the ruler than about Danzig's privileges. With neither side being able to defeat the other militarily, a compromise was reached, with economic as well as religious[2] privileges of the city being restored and recognized, in return for a large reparation and recognition of Bathory as the king.

In 1572, the throne of the Polish-Lithuanian Commonwealth was vacated when King Sigismund Augustus died without an heir and Henry III of France after a brief period as a Polish king returned to France. Polish-Lithuanian Commonwealth was an elective monarchy and (after the Union of Lublin in 1569) in close union with Lithuania, meaning that Polish nobility (szlachta) could vote on who would become the next king. Cities had no vote; Danzig however was invited by primate of Poland and interrex Jakub Uchański to cast a vote but declined to send a representative.[5] Members of the Senate (including most of the Polish episcopate led by Jakub Uchański) decided to elect Emperor Maximilian II, against the will of majority of nobility, which during the royal election voted for Anna Jagiello (the last representative of the former Polish-Lithuanian Jagiellon dynasty) and Stephen Báthory as her husband and de facto King. This led to a some unrest in Poland.

Danzig, whose economic privileges were reduced by the Karnkowski Statutes, wanted to use the situation to regain its preferential position within the Polish Crown. The town of Danzig also preferred Maximilian,[6] who looked more likely to support towns' economic privileges, and who could also threaten serious economic repercussions (boycott by the Habsburgs). Thus the Hanseatic League city, encouraged by its immense wealth and almost impregnable fortifications, as well as by the secret support of Denmark[7] and Emperor Maximilian, had supported the latter's election.

On 1 May 1576 Stefan Bathory married King Anna Jagiello and was crowned by Stanisław Karnkowski as King of Poland. Jakub Uchański and nuncio Wincenty Laureo were still respecting Maximillian as a King, but soon they and others accepted will of majority. When Stefan sweared in all of existing rights of Prussia Royale and Prussia Ducale,[8] and was recognized as a rightful ruler,[9] one city—Danzig—refused to do it and was still respecting Maximillian as King of Poland.[10]

Danzig refused to recognize Bathory's authority, and the tensions grew as rioters looted and burned down an abbey in Oliwa.[6] The abbey belonged to the bishop of Kujawy, Stanisław Karnkowski, under whose jurisdiction was the whole Polish Pomerania. The Sejm (parliament) of the Commonwealth did not approve higher taxes for the war. It has however approved a banicja (form of political exile and excommunication), confiscation of Danzig property, arrest of its citizens, commercial blockade and rerouting of the important trade via the port of Elbląg (which however was immediately blockaded by Denmark's navy).[11][12]

] and Głowa, two strategically important villages, thereby blockading Daznig's port from the east and the south. The King left the army under the command of Hetman Jan Zborowski and most of the forces were stationed at Tczew (Dirschau). In the west the main base was at Puck (Putzig), where there was a mercenary force led by Ernest Weyher. While some Polish privateer ships fought the Gdansk and Danish fleets, for the most part the control of the Baltic Sea belonged to the Danzigers and their allies.[13] Soon after the fighting begun, Maximilian's II death (12 October 1576) was announced; this weakened Danzig's position and made the conflict less about the recognition of the ruler than about Danzig's privileges. 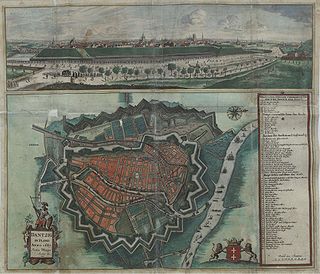 With the coming of the spring of 1577, the fighting began anew. The Danzig army, led by the German mercenary commander Johannn Winkelbruch (Hans Winckelburg von Kölln), was about 7,000-12,000 strong (including mercenaries, among them a Scottish regiment[14]), but with less than 1,000 cavalry. Winckelburg decided to crush the small army of Zborowski (who had about 2,000 men, half of them cavalry), but the Danzig army was utterly defeated by Zborowski in the battle of Lubiszewo on April 17, 1577.[6][15]

After the battle, the Danzig forces retreated behind the walls, citizens pulled down trees and houses in front of fortifications[16][17] and a siege began. Reinforcement with King Batory arrived only in July.[13] During it King Stefan was using heated cannonballs[18] and turned back the flow of the Radunia river.[8] Bathory had about 11,000 men, and Danzig, about 10,000.[13] A surprise attack by the Danzigers managed to destroy two-thirds of the Polish artillery, vastly slowing the progress of the siege.[13] In September 1577[8] Danzig and Danish fleets started a blockade of Polish trade along Elbing and attacked its suburbs. Their troops that landed were soon pushed back by Bathory's Hungarian infantry under Kacper Bekiesza, and the city council send a note thanking the King.[8][19]

However, after a few months, Stephen's army was unable to take the city by force. On 16 December 1577,[1] the siege ended and citizens swore loyalty to Stefan's representatives Eustachy Wołłowicz and Andrzej Firlej.[9][20] (Treaty of Malbork).[6]

The Gdansk merchants had suffered a great deal from the blockade, especially because of lack of trade.[13] In the meantime, Bathory also wanted to end the siege, as Ivan the Terrible of Muscovy broke a three year truce in the same year[21] and Muscovy tried to gain control of the eastern territories of the Commonwealth (Livonian War).[22]

The siege and all economic restrictions that were passed in the past two years were lifted in return for reparations and recognition of Bathory as the sovereign. Stefan forgave the city's rebellion and again turned Polish trade from Elbing to Danzig. The city, in turn, recognized him as ruler of Poland and promised to pay the large sum of 200,000 złotys and an additional 20,000 repatriation to the abbey of Oliwa in five years.[23]

On 26 November 1585 the Karnkowski Statutes from 1570 were lifted,[24] and Danzig again became the most privileged city in the Commonwealth. The subsequent policies of Bathory also increased the power of Hohenzollerns in Prussia.[22]