The Jacobean style is the second phase of Renaissance architecture in England, following the Elizabethan style. It is named after King James I of England, with whose reign it is associated.

The reign of James VI of Scotland (or James I of England) (1603–1625), a disciple of the new scholarship, saw the first decisive adoption of Renaissance motifs in a free form communicated to England through German and Flemish carvers rather than directly from Italy. Although the general lines of Elizabethan design remained, there was a more consistent and unified application of formal design, both in plan and elevation. Much use was made of columns and pilasters, round-arch arcades, and flat roofs with openwork parapets. These and other classical elements appeared in a free and fanciful vernacular rather than with any true classical purity. With them were mixed the prismatic rustications and ornamental detail of scrolls, straps, and lozenges also characteristic of Elizabethan design. The style influenced furniture design and other decorative arts. 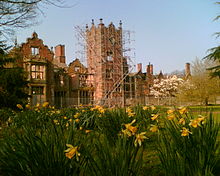 Already during Queen Elizabeth I's reign reproductions of the classic orders had found their way into English architecture, based frequently upon John Shute's The First and Chief Grounds of Architecture, published in 1563, with two other editions in 1579 and 1584. In 1577, three years before the commencement of Wollaton Hall, a copybook of the orders was brought out in Antwerp by Hans Vredeman de Vries. Though nominally based on the description of the orders by Vitruvius, the author indulged freely not only in his rendering of them, but in suggestions of his own, showing how the orders might be employed in various buildings. Those suggestions were of a most decadent type, so that even the author deemed it advisable to publish a letter from a canon of the Church, stating that there was nothing in his architectural designs which was contrary to religion. It is to publications of this kind that Jacobean architecture owes the perversion of its forms and the introduction of strap work and pierced crestings, which appear for the first time at Wollaton (1580); at Bramshill, Hampshire (1607–1612), and in Holland House, Kensington (1624), it receives its fullest development.

Although the term is generally employed of the style which prevailed in England during the first quarter of the 17th century, its peculiar decadent detail will be found nearly twenty years earlier at Wollaton Hall, Nottinghamshire, and in Oxford and Cambridge examples exist up to 1660, notwithstanding the introduction of the purer Italian style by Inigo Jones in 1619 at Whitehall.

Examples of original Jacobean architecture in the Americas include Drax Hall Great House in Barbados and Bacon's Castle in Surry County, Virginia.