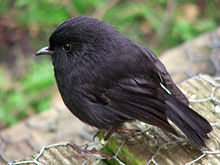 The Black Robin. Saving the bird was a major conservation success story.

Conservation in New Zealand has a history associated with both Māori and Europeans. Both groups of people caused a loss of species and both amended their behaviour after realising their effect on indigenous flora and fauna.

New Zealand has fourteen national parks, thirty one marine reserves and many other protected areas for the conservation of biodiversity. The introduction of many invasive species is threatening the indigenous biodiversity since the geographical isolation of New Zealand led to the evolution of plants and animals that did not have traits to protect against predation. New Zealand has a high proportion of endemic species, so pest control is generally regarded as a high priority.

The New Zealand Department of Conservation administers approximately 30% of New Zealand's land, along with less than 1% of the country's marine environment, for conservation and recreational purposes. It has published lists, under the New Zealand Threat Classification System, of flora and fauna which is at risk or declining which are included in national and regional plans.[1]

The Black Robin was saved from the brink of extinction by a conservation effort led by Don Merton of the New Zealand Wildlife Service.

Most of the current 11.9 million hectares of agricultural land had been cleared, representing around 44% of the total land area of New Zealand.[2] Initial attempts to decrease the scale of further deforestation, such as Forestry Rights Registration Act 1983 that created 'forestry rights' have been argued to only be moderately successful.[2] However, they created world class structures of data collection and property rights that made way first for an amendment to the 1949 Forests Act in 1993 and later to the Climate Change Response Act 2002.[2] New Zealand's patterns of greenhouse gas emissions are similar to Scandinavian countries, in that land use and land use change and forestry are amongst the most significant contributors.[2] Forestry came to be seen as main tool in meeting New Zealand's Kyoto Protocol targets.[2] Accordingly, REDD programmes (reducing emissions from deforestation and forest degradation) were implemented, whereby reforestation and deforestation was tied carbon emissions credits and traded (ETS) and commercial carbon-sink forests were planted.[2] Perhaps due to the government's initial control over REDD and the trade in carbon credits there was initially an increase in deforestation and it was not until private forestry owners gained access to the trading scheme and to carbon credits that the scheme started to produce reductions in deforestation.[2]

The use of 1080 poison (sodium fluoroacetate) is a contentious issue. 1080 is used with carrots and cereal pellets to control the Common Brushtail Possum, an introduced animal pest.

Conservation organisations began to form from the 19th century. Scenery Preservation Societies formed in some of the Provinces.

An early conservation lobby group was the Royal Forest and Bird Protection Society of New Zealand, which is now the foremost environmental organisation involved in conservation advocacy in New Zealand. In recent years numerous conservation, landcare and activist groups have formed including: