Donald Merton, QSM (22 February 1939 – 10 April 2011) was a New Zealand conservationist best known for saving the black robin from extinction.[1][2] He also discovered the lek breeding system of the kakapo.[3]

Until his retirement in April 2005, Don Merton was a senior member of the New Zealand Department of Conservation’s Threatened Species Section, within the Research, Development & Improvement Division, Terrestrial Conservation Unit, and of the Kakapo Management Group. He has had a long involvement in wildlife conservation, specialised in the management of endangered species since he completed a traineeship with the New Zealand Wildlife Service (NZWS) in 1960.[1]

Don Merton was born in Devonport, Auckland in February 1939 and with his family moved to Gisborne later that year when Don’s father, Glaisher (Major) Merton was appointed the first New Zealand Automobile Association representative in the Poverty Bay region. Initially, the family settled at Wainui Beach near Gisborne, but in 1945 moved to a farmlet in Mangapapa Road, Gisborne.

Together with his two older brothers Don had early success fostering an orphaned wild goldfinch nestling to their Grandmother's canary. This early success proved crucial 35 years later in inspiring a cross-fostering programme to save the black robin, which at that time numbered 5 individuals including just one productive pair, and was the most endangered species in the world.

Don attended schools at Kaiti, Mangapapa, Gisborne Intermediate and Gisborne High School. On leaving school he secured a traineeship with the fledgling New Zealand Wildlife Service. In 1987 the Wildlife Service merged with other Government conservation agencies to form the Department of Conservation. In the early 1960s Don became one of only two field officers working nationally on threatened species, roles now filled by more than 80 staff. Don married Margaret Johnston of Hangaroa near Gisborne and has a son, Dave, a daughter-in-law Jan Tinetti and two teen-age grandsons, Liam and Zak, all living in Tauranga, New Zealand. 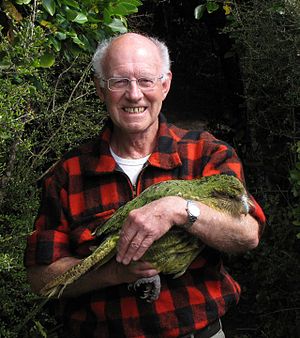 Richard Henry kakapo held by Don Merton, Codfish Island, November 2010. Richard Henry spent the past 35 years on four predatory-mammal-free islands. Named after Richard Treacy Henry the pioneer conservationist, and from 1894 to 1910, custodian of Resolution Island, New Zealand he was the last known survivor of his species from mainland New Zealand and was believed to be more than 100 years old. Richard Henry’s legacy: His one female and two male off-spring hatched on Maud Island in 1998 may hold the key to genetic rescue of a species suffering from chronic lack of genetic diversity. Richard Henry kakapo was found dead on Codfish Island on 24 December 2010.[4]

Together with NZWS colleagues and volunteers, his contributions include:

In New Zealand Don is also known for his role in the rescue of the South Island saddleback when in the early 1960s rats Rattus rattus invaded its final refuge - Big South Cape Island; for facilitating recovery in the North Island saddleback, confined in the early 1960s to a single island (Taranga/Hen Island); for his role, since 1974, in developing the rescue strategy and techniques, and for his role in the rescue and recovery programme for the giant, flightless, nocturnal kakapo parrot; and for devising the rescue strategy and leading the successful rescue and recovery of the Chatham Islands black robin when in the late 1970s its numbers fell to just five individuals - including only one effective breeding pair. The black robin now numbers ~250 individuals on two islands.

Don was awarded a Churchill Fellowship in 1973 to study management of endangered species in the USA and Europe. He was the international chairperson of IUCN/Birdlife International’s Parrot Specialist Group from 1983 to 1986. In 1989 he was awarded the Queen’s Service Medal for services to New Zealand; in the following year he received the Royal Society of New Zealand’s Fleming Award for Environmental Achievement; in 1992 the honorary degree of Doctor of Science was conferred on him by Massey University for his contribution to science; in 1994 the Royal Society for the Protection of Birds (UK) awarded him its medal for his “international contribution to species survival” and in 1998 the United Nations Environment Programme (UNEP) elected him to its Global 500 Roll of Honour for his “outstanding contributions to the protection and improvement of the environment.” Don was named one of “100 Great New Zealanders of the 20th Century” in the 60th anniversary issue of the New Zealand Listener;[5] in 2001 the New Zealand Government presented him with a certificate in commemoration of the United Nations International Year of the Volunteer 2001, for his “valued contribution toward assisting developing countries to reduce poverty and achieve sustainable development”; in 2004, BirdLife International awarded him its Conservation Achievement Award for achievements during his 48 year career in the rescue and recovery of endangered birds within New Zealand and elsewhere; on his retirement from the NZ Department of Conservation in April 2005 the Department granted him Honorary Technical Associate status – the first such recipient; in 2010 the Royal Forest & Bird Protection Society of NZ presented him with its “Old Blue Award” in recognition of his extraordinary and sustained contributions to conservation in NZ and worldwide”; and in 2011 he became a “Fellow of the Ornithological Society of NZ in recognition of his “lifetime contributions to ornithology and to the work of the Society”.

As well as being the recipient of numerous awards the The Don Merton Conservation Pioneer Award is named after him.[6]