The h-cluster reductions are various consonant reductions that have occurred in the history of English involving consonant clusters beginning with /h/ that have lost the /h/ in certain varieties of English.[1]

The yew–hew merger is a process that occurs in some dialects of English that causes the cluster /hj/ to be reduced to /j/.[2] It leads to pronunciations like /juːdʒ/ for huge and /juːmən/ for human; hew and yew become homophonous. It is sometimes considered a type of glide-cluster reduction, but is much less widespread than wh-reduction, and is generally stigmatized where it is found. Aside from accents with h dropping, this reduction is in the United States found mainly in accents of Philadelphia and New York City; also in Cork accents of Hiberno-English. In some dialects of English, the cluster /hj/ (phonetically [çj]) has been reduced to [ç] so that hew and yew differ only by the initial consonant sound (i.e. [çuː] and [juː]).[1][3][4]

The hl-cluster, hr-cluster and hn-cluster reductions are three reductions that occurred in Middle English that caused the consonant clusters /hl/, /hr/ and /hn/ to be reduced to /l/, /r/, and /n/. For example, Old English hlāf, hring and hnutu became loaf, ring and nut in Modern English.

Yod dropping is the elision of the sound [j]. The term comes from the Hebrew letter yod, which represents [j].

Yod dropping before [uː] occurs in most varieties of English in the following environments:[1]

There are accents, for example Welsh English, in which pairs like chews/choose, yew/you, threw/through are distinct: the first member of each pair has the diphthong [ɪu] while the second member has [uː].[1]

Many varieties of English have extended yod dropping to the following environments, on condition that the [j] be in the same syllable as the preceding consonant:

Glide retention in these contexts has occasionally been held to be a shibboleth distinguishing Canadians from Americans. However, in a survey conducted in the Golden Horseshoe area of Southern Ontario in 1994, over 80% of respondents under the age of 40 pronounced student and news without yod.[5] 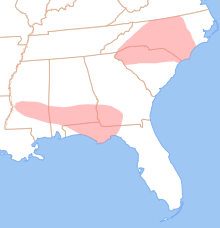 The areas marked in pink show parts of the United States where a distinction between /ɪu/ in dew and /u/ in do is made.[6]

General American thus undergoes yod dropping after all alveolar consonants. Some accents of Southern American English preserve the distinction in pairs like loot/lute and do/dew by using a diphthong /ɪu/ in words where RP has /juː/, thus [lut]/[lɪut], [du]/[dɪu], etc.[6]

However, in words like annual, menu, volume, Matthew, continue, etc., where there is a syllable break before the /j/, there is no yod dropping.

Some East Anglian accents such as Norfolk dialect extend yod dropping not only to the position after /t/, /d/ or /n/, but to the position after nonalveolar consonants as well, so that pairs like pure/poor, beauty/booty, mute/moot, cute/coot are homophonous.[1] Watchers of UK television are likely to be familiar with Bernard Matthews's description of his turkeys in his television advertisements as bootiful for beautiful.

This can lead to additional homophony; for instance, in the case of /dʒ/, dew, due, and Jew come to be pronounced identically. Yod coalescence has traditionally been considered non-RP.

The rap–wrap merger is a reduction that causes the initial cluster /wr/ to be reduced to /r/, making rap and wrap, rite and write etc. homophones.

Old English had a contrast between /wr/ and /r/, the former characterized by lip rounding. In Middle English, the contrast disappeared and all cases of initial /r/ came to be rounded.

The not–knot merger is a reduction that occurs in modern English where the historical cluster /kn/ is reduced to /n/ making knot and not homophones.

All of the kn words stem from Old English forms beginning with cn-, and at the time all were pronounced with an initial /k/ before the /n/. These words were common to the Germanic languages, most of which still pronounce the initial /k/. Thus, for example, the Old English ancestor of knee was cnēo, pronounced /kne͡oː/, and the cognate word in Modern German is Knie, pronounced /kniː/.

Most dialects of English reduced the initial cluster /kn/ to /n/ relatively recently; the change seems to have taken place in educated English during the seventeenth century, meaning that Shakespeare did not have the reduction.[citation needed]

The nome–gnome merger is the reduction of the initial cluster /ɡn/ to /n/. In Middle English, words spelt with gn like gnat, gnostic, gnome, etc. had the cluster /ɡn/. The humorous song The Gnu jokes about this, even though the g in gnu may actually have always been silent in English, since this loanword did not enter the language until the late 18th century.[8] The trumpeter Kenny Wheeler wrote a composition titled "Gnu High", a pun on "New High".

S-cluster reduction is the dropping of /s/ from the initial consonant clusters with voiceless plosives (environments /sp/, /st/, and /sk(ʷ)/) occurring in Caribbean English. After the initial /s/ is removed, the plosive is aspirated in the new word-initial environment, resulting in pronunciations such as:

Reduction of final consonant clusters occurs in African American Vernacular English and Caribbean English. The new final consonant may be slightly lengthened as an effect.

The plurals of test and desk may become tesses and desses by the same English rule that gives us plural messes from singular mess.[9][10][11][12]

The plum–plumb merger is the reduction of the final cluster /mb/ to /m/ that occurs in all dialects of present English. In early Middle English, words spelled with mb like plumb, lamb etc. had the cluster /mb/.

The prince-prints merger is a merger of /ns/ and /nts/ occurring for many speakers of English. For them, "prince" and "prints" are homonyms as [prInts]. A [t] gets inserted between the [n] and the [s].

Yod rhotacization is a process that occurs for some Southern AAVE[13] speakers where /j/ is rhotacized to /r/ in consonant clusters causing pronunciations like:

S-cluster metathesis is the metathesis of final consonant clusters starting with /s/ occurring in African American Vernacular English[13] as well as many other varieties of English.

The above pronunciations in fact have a long history, and all the metathesised forms have existed in English for around as long as the words themselves, with varying degrees of acceptance.

For example, the Old English verb áscian also appeared as acsian, and both forms continued into Middle English. The two forms co-existed and evolved separately in various regions of England, and later America. The variant ascian gives us the modern standard English ask, but the form "axe", probably derived from Old English acsian, appears in Chaucer: "I axe, why the fyfte man Was nought housband to the Samaritan?" (Wife of Bath's Prologue, 1386.) It was considered acceptable in literary English until about 1600[14] and can still be found in some dialects of English including African American Vernacular English. It is, however, one of the most stigmatized features of AAVE, often commented on by teachers. It also persists in Ulster Scots as /ˈaks/ and Jamaican English as /ˈaːks/, from where it has entered the London dialect of British English as /ˈɑːks/.

The scream–stream merger is the pronunciation of the consonant cluster /str/ as /skr/ occurring for some speakers of African American Vernacular English making "scream" and "stream" homophonous as /ˈskriːm/.[13]

This phonological pattern in AAVE is a phonological pattern that's been mentioned from time to time, often by speech pathologists. Presumably the speech pathologists were concerned about this use of "skr" in place of standard English "str" because it was not clear whether the combination of sounds was an indication of a disorder or dialectal pattern. Still the scream–stream merger has not been observed or recorded in the literature nearly as often as other sound patterns. There are three possible reasons for this: (1) One is that because "skr" only occurs in positions where "str" can occur in general American English, there will be limited opportunity to produce the sound. (2) Secondly, the scream–stream merger may be viewed as a feature of the speech of young AAVE speakers that is not maintained in adult AAVE. (3) Thirdly, the scream–stream merger may be associated with AAVE spoken in certain regions of the United States.

Common words in which the /sk/ sequence occurs are given below:

In summarizing her research on the cluster, Dandy (1991) notes that the form is found in Gullah and in the speech of some young African Americans born in the Southern United States. She explains that the stream–scream merger is a highly stigmatized feature and that many of the students in her study who used it were referred to speech pathologists. She goes on to note the following about her research: "I also found a continuum that may indicate sound change in progress. If children said skretch for stretch, they probably have used the skr alternation in other words that contained the feature: skreet for street, skrong for strong, skrike for strike, skranger/deskroy for stranger/destroy. There were some who said skreet for street but did not make alteration on other words with that sound". (p. 44). Also, although Dandy does not make this point, it is important to note that the students' use of /skr/ may have been affected by the training they were getting from the speech pathologists.

The prince-prints merger is a merger of /ns/ and /nts/ occurring for many speakers of English. For them, "prince" and "prints" are homonyms as [prInts]. A [t] gets inserted between the [n] and the [t]. Likewise the fricative [S] often becomes [tS] after [n], so that "pinscher" and "pincher" are homophones.

These vowel clusters may also merge: