The school was founded between 1235–1256, probably nearer to the former. Later endowed as a free school by John Gardyner.[1] The first definite mention of the old grammar school is found in a deed dated 4 August 1469, when the Abbess of Syon granted to John Gardyner, of Bailrigg (near Lancaster), a lease of a water-mill on the River Lune and some land nearby for two hundred years to maintain a chaplain to celebrate worship in the Church of St. Mary, Lancaster, and to instruct boys in grammar freely, "unless perchance something shall be voluntarily offered by their friends".

In 1472, John Gardyner's will made further provisions for the endowment of the school, and also for William Baxstonden to keep the school so long as he could teach the boys. In 1682, the school was rebuilt and in 1852 was removed from the old site on the slopes by the priory to the outskirts of the city, where it now stands (though the city has expanded around it, so they are no longer the outskirts).

This building (now known as the Old Building), which stands on the north side of East Road, was designed by the local architects Sharpe and Paley.[2] The foundation stone was laid on 5 May 1851 by Rt Revd James Prince Lee, the Bishop of Manchester.[3] The title "Royal" was granted by Queen Victoria in the same year.[2] This building has been designated by English Heritage as a Grade II listed building.[4]

In 1969, the school celebrated its quincentenary and was visited by HM The Queen. In 1995, the school received a visit from the Chancellor of the Duchy of Lancaster, The Rt Hon Roger Freeman MP.

In 2001, to mark the 150th anniversary of becoming the Royal Grammar School, the school welcomed The Princess Royal.

In 2011, the school was granted Academy status. 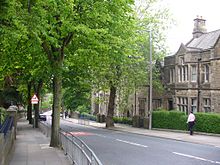 The 2006 Ofsted report stated that Teaching and learning are outstanding throughout the school..[5]

In 2005 just under three-quarters of A level entries resulted in grades A or B (excluding General Studies) whilst at GCSE three-quarters of all grades were A* or A, with nearly all pupils gaining 10 passes and five pupils gaining a clean sweep of A* grades.[6] Over 90% of students go on to further education and a number gain places at Oxford and Cambridge Universities.

Former pupils are known as "Old Lancastrians". Notable ones include:

The school offers a wide range of sports to boys throughout their school careers. However, the school remains especially strong in cricket and rugby. Recent highlights include a victory over Charterhouse School in the final of the Lord's Taverners Cricketer Colts Trophy for Schools in 1999,[7] and a run to the semi final of the Daily Mail U18 Cup in 2004 by the school First XV.[8]

In 2006, a student who plays American football was picked for All-Star University England team.[citation needed]

In the 2008/2009 season, LRGS won the Lancashire schools cup in the U18s and the U13s as well as winning the Floodlit cup for Lancashire and Cheshire in the U16s. They also set a new record with four teams reaching the county finals.

In 2009, the U13s and U14s reached the finals of the Lancashire Cup, however both lost narrowly against Manchester Grammar School.

In 2010, LRGS also became the U19 and U16 district champions for table tennis.

In 2011 the Cross Country team became Northern Schools Champions for the second time, winning four out of the five races.

Lancaster Royal Grammar School Boat Club was first founded in 1948.[9] They were tenants of Lancaster John O' Gaunt Rowing Club from 1985 to 2011.[10] In 2011 the Boat Club relocated to Halton Army Training Camp.

The boat club has had 15 years of national success under Tim Lucas achieving medal success in either the Schools' Head of the River Race, The National Schools Regatta or the National Rowing Championships for ten consecutive years from 1992 to 2002.[10] The club also made at least the final of a national event from 1992 to 2006. The club has had much international success with members of the boat club rowing at a national level, including the Munich International Regatta in 2006 and the Coupe de la Jeunesse in 2006.[11]

The School has had its own Combined Cadet Force (CCF) since 1914, although it was as that time known as the Officer Training Corps. Its roots, however, can be traced back further still, with "references to the existence at Lancaster of a Cadet Volunteer Battalion in the early nineteenth century".[12] By 1861, this Battalion was seventy strong, "when a silver bugle was presented to the contingent by Mrs Lee, wife of the Headmaster".[12]

The CCF at LRGS comprises Royal Navy, Army and Royal Air Force sections. Pupils in the Third Form and above are allowed to join. It parades on Tuesday afternoons after school and is voluntary. All sections participate in camps throughout the year, including an annual summer camp during the summer holidays, and an Easter camp involving adventurous training in which all three sections can participate.

The Army Section is approximately 105 boys strong. They participate in camps throughout the year including an annual camp that lasts in excess of one week, and an Easter Camp where they take part in adventure training activities. Annual Camp 2007 was at a CCF Central Camp at Wathgill, in North Yorkshire.

The Royal Air Force section comprises approximately 90 cadets including the girls from LGGS who were allowed to participate in the RAF Section from September 2011. Cadets in the RAF section receive flying lessons in the Grob Tutor T.1 aircraft at least once a term, and gliding lessons in the Grob Vigilant G 109 glider at least once a term. Other opportunites for flying and gliding scholarships, as well as various leadership courses, are available to those cadets who are keen and who meet the minimum requirements. As with the Army and Navy sections, the RAF cadets have the option of attending Easter and summer camps, which are always greatly enjoyed. The most recent RAF Easter camp was held at RAF Valley, with the summer camp being held at RAF Halton.

The LRGS senior team has enjoyed much success in the past, with the most recent entry netting them the Plate in 2011 and in 2010, winning the whole competition.

The juniors have won on 3 occasions (1995, 2007 and 2008) and hope to do well in this year's quiz. They are now through to the National Finals in Winchester, and will play against 7 other schools. In Winchester, the team won the Plate Competition (for first-round losers), which equals the senior record this year.