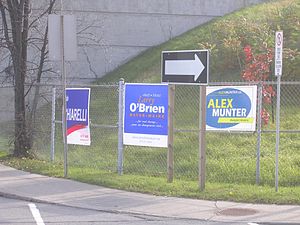 The race featured three main candidates: Incumbent mayor Bob Chiarelli, former Kanata councillor Alex Munter and businessman Larry O'Brien. The race began as a fight between Chiarelli and Munter, with Munter getting the edge and 2003 candidate Terry Kilrea in a close third. However, in the summer O'Brien joined the campaign, splitting the right of centre vote. Kilrea dropped out and endorsed rival Chiarelli fearing Munter's lead. However, most of Kilrea's support went to O'Brien, creating a tight three way race. Chiarelli's support then got pulled away from the right by O'Brien and to the left by Munter and was eventually depleted, and by the last weekend before the election, O'Brien had caught up to Munter and led for the first time. This lead carried through on election day.

In the end, Munter could only win his core areas in the central part of the city, plus his former home of Kanata, while O'Brien won the rest of the city—suburban areas and the rural areas (where he did especially well). Chiarelli did not win any wards, but he did finish second in Gloucester-South Nepean with 28%. This area of the city was where his O-Train proposal was going to go.

The 2006 municipal election had one of the highest voters turn-out in Ottawa's history, with 54%.[citation needed] 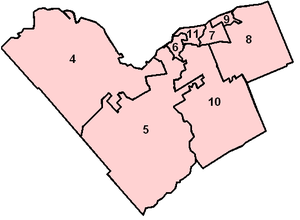 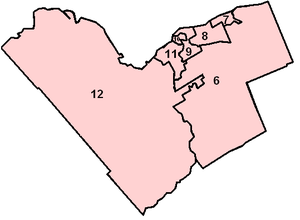 Bob Chiarelli: Incumbent mayor, has been mayor of Ottawa since 2001, and was regional chair of the Regional Municipality of Ottawa-Carleton prior. He is also a former Liberal Member of Provincial Parliament.[4]

Robert Larter: Unknown candidate. The Ottawa Citizen reported his registered number was traceable to an apartment in Vanier where he moved away from in the summer. The Citizen was unable to contact him.

Larry O'Brien: Chairman and former CEO of Calian Technologies Ltd., an Ottawa based company that sells technology services to industry and government.[6]

Barkley Pollock: 27 year old wants to look at the possibility of a municipal income tax to increase money for the poor. Campaigned for Liberal Richard Mahoney in Ottawa Centre in the 2004 and 2006 federal elections.[7]

Jane Scharf: Local poverty activist. She has been arrested more than once including an arrest during the Homeless Action Strike on City Hall. All charges were dropped.[8]

Don Rivington: A single-issue candidate who wants an ombudsman for the city. Ran for city council in the 2003 election in Bay Ward but lost. Dropped out of the Orléans Ward by-election in 2006.[9]

Terry Kilrea: Placed second in the 2003 election. Kilrea is generally regarded as a conservative. He ran for the Conservative Party of Canada's nomination race in Ottawa South in the 2004 election but lost. Withdrew on August 30, 2006 and will endorse Chiarelli. Will run as councillor candidate in Bay Ward against Alex Cullen.[10]

New ward boundaries were drawn for the 2006 election. Under the new plan, the size of city council will be increased by two members. The boundary commission made the following proposal that was adopted by city council: