Since retiring Offiah has also provided commentary for Sky Sports rugby league coverage and worked as a player agent.[2]

A Londoner, Offiah attended Woolverstone Hall School near Ipswich, Suffolk, where he represented the school at fencing and played rugby and cricket. He played for Essex 2nd XI but soon realised his main talent was for rugby. At club level, he first played rugby union for Rosslyn Park and after starring on the Sevens circuit and for the Barbarians, there was talk of an England future.[3]

Offiah was spotted by Widnes coach Doug Laughton playing in the Middlesex Sevens and was "brought North" to play rugby league for the 1987–88 season. Alex Murphy had been interested in acquiring Offiah from rugby union, but the board of directors at St. Helens infamously referred to Offiah as an "uncoordinated clown" and the interest was not followed up with action. It was at Widnes where he forged his reputation as a devastating winger, scoring 181 tries in 145 games. By his second season at Widnes, Offiah's performance was rewarded with selection for the Great Britain national team and the prestigious Man of Steel award.

During the 1989–90 Rugby Football League season, Offiah he played for defending champions Widnes on the wing in their 1989 World Club Challenge victory against the visiting Canberra Raiders.

Playing on the wing, Offiah formed a devastating partnership with Gene Miles in his first season at Wigan scoring 30 tries in just 15 games including setting a new club record of ten in a single match against Leeds in the Premiership semi-final in May.[6]

He was selected to go on the 1992 Great Britain Lions tour of Australia and New Zealand. During the 1992–93 Rugby Football League season Offiah played on the wing for defending RFL champions Wigan in the 1992 World Club Challenge against the visiting Brisbane Broncos.

Offiah played in four Challenge Cup wins, five Championship teams, three Regal Trophy wins and one Lancashire Cup victory. He twice won the Lance Todd Trophy at Wembley. His 90 metre solo try in the 1994 Challenge Cup Final win over Leeds is remembered as one of the finest ever but he made a habit of such runs during his career. After the 1993–94 Rugby Football League season Offiah travelled with defending champions Wigan to Brisbane, playing on the wing in their 1994 World Club Challenge victory over Australian premiers, the Brisbane Broncos.

Offiah made a total of 158 appearances for Wigan with another single appearance as a substitute. He scored more than a try a game, crossing the line 186 times. He also managed a goal and 3 drop goals thus scoring a grand total of 749 points for the club. 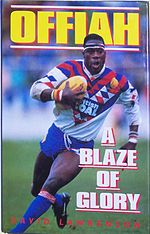 A biography by David Lawrenson entitled Offiah: A Blaze of Glory was published in 1993. Then In 1995 Martin Offiah's life story, a 30 minute documentary was produced and directed by Pogus Caesar for Carlton TV UK as part of the Respect TV series.

When the game made the switch to summer rugby in 1996, Offiah played in only ten games before moving to the London Broncos. He appointed MBE in the New Year Honours 1997 and also played for London in their 1999 Challenge Cup final defeat against Leeds. After this he moved to Salford for the 2000 season, staying for two seasons. He finished his career with London Wasps in Rugby Union.

In 2004 Offiah was one of the celebrities who took part in the first series of the BBC's successful show Strictly Come Dancing, reaching fourth place with his partner Erin Boag. In 2005 alongside Natasha Kaplinsky, he hosted the one-off special, Strictly African Dancing.

He currently works as a pundit for Sky Sports rugby league coverage. He was a regular studio guest during the 2008 Rugby League World Cup, and he presents a weekly Super League round up on Sky Sports News.

Offiah is also the agent for Warrington scrum half Richie Myler and Kyle Eastmond of St Helens.

Offiah has 2 sons with his partner Virginia Shaw and lives in West London.

In 2006 he appeared on a Reality TV Special of The Weakest Link, winning £10,050 and splitting the winnings with Danniella Westbrook. Only once in the game did Martin get a single vote, and statistically was the strongest link in round six.