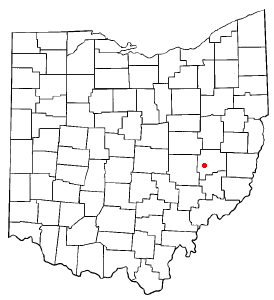 Cambridge is a city in the of and the of Guernsey CountyGR|6. The municipality is located in southeastern Ohio and is in the Appalachian Plateau of the . At the time of the 2000 census, Cambridge was a city with 11,520 residents. It is the center of the Cambridge Micropolitan Statistical Area (as defined by the in 2003). Cambridge is well-known among glass collectors as being the location for the , and plants. The Cambridge area is also famous for its "S" shaped bridges, some of the first bridges ever constructed in the . It is located adjacent to the intersection of and , which the proclaimed in 1969 was the world's largest interchange (in terms of land area).

In 1796 Col. received funds to cut a road from Ohio to Kentucky. He responded by naming the first settlements in honor of . The land on which part of Cambridge stands was granted to and by the government in 1801. In 1806 another group of early settlers from the Isle of in the of England pitched camp in Cambridge because the women in the party refused to move on.

Tom Orr is the current Mayor of Cambridge. [5] He replaces former Mayor Sam Salupo, who replaced the opponent of Tommy Orr's, Charles Schaub.

*Salt Fork State Park and Lodge, home of the biggest inland beach in Ohio.
*
*Seneca Lake
*
*
*, a natural wildlife preserve
*, an annual
*Ragnarok, the largest event in the country, which occurs in late June at the Spring Valley campground
*, Arts festival held annually in the city park around August

*, a concert pianist
*William Boyd, (known for his film portrayal of cowboy hero "")
* , U.S. Senator and . First American to orbit the earth and oldest man to visit space.
* , actress who starred as 'busty and beautiful tool assistant' Heidi Keppert, the Tool Time girl on the ABC Sitcom, "." (Born in , but spent 10 years of her life in Cambridge, Ohio, including her middle school and High School years). Attended Cambridge High School.
* , former for the and . He was also the first head coach of the and first head coach of the
* , former wide receiver for the and
* , American experimental playwright, lyricist, and theater director, author of "" for which he won the 1981 for Best Book of a Musical.
* (Not born in Cambridge, but lived there for some time), current outfielder for the
* , president of the for 26 years.
* ,(actually born in N.J. according to his major league records but a welcome resident of Cambridge) former pitcher for the and
* , and newspaperman, born in Cambridge.
* Gene Ford, One of the most energetic Basketball Coaches in Ohio, he led his teams to 440 victories in 31 years as a head coach, the last 25 years as the head coach at Cambridge High School. Gene's teams won: 18 sectional titles, 8 district titles, 5 regional titles and were the State Runner-up in 1994-95. Near the end of his coaching career he was immortalized with a "bobble head" statue in his honor with the proceeds from the sale going to the Scott Bennett Memorial Scholarship Fund for students a Cambridge High School.