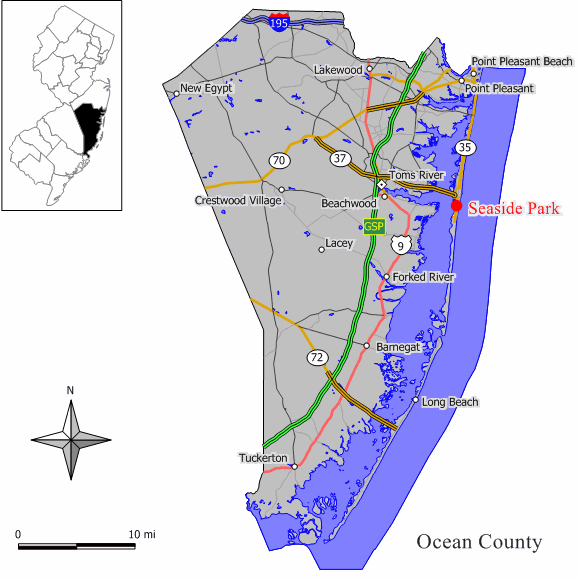 Seaside Park is a Borough in Ocean County, , . As of the , the borough population was 2,263. Seaside Park is situated on the , a long, narrow barrier peninsula that separates from the .

What is now Seaside Park was a section of Dover Township (now known as Toms River Township) until the creation of Berkeley Township in 1875. The area then became known as the “Sea Side Park” section of Berkeley Township. Over the next twenty-five years, lots were sold, houses and roads were built, and the population of Seaside Park began to slowly grow.

On , , President , the acting , signed a bill incorporating “Sea Side Park” as an independent borough, created from portions of Berkeley Township.

As the community grew, the name of the borough lost a space. In 1914, a newly-appointed municipal clerk wrote the name of the town as “Seaside Park” in the council minutes. This practice continues to this day. [ [http://www.seasideparknj.org/SPHistory.htm "Sea Side Park" A Brief History] , Borough of Seaside Park. Accessed , .]

There were 1,127 households out of which 16.3% had children under the age of 18 living with them, 41.3% were married couples living together, 8.9% had a female householder with no husband present, and 46.2% were non-families. 38.8% of all households were made up of individuals and 16.1% had someone living alone who was 65 years of age or older. The average household size was 2.01 and the average family size was 2.61.

Seaside Park is governed under the Borough form of New Jersey municipal government. The government consists of a Mayor and a Borough Council comprising six council members, with all positions elected at large. A Mayor is elected directly by the voters to a four-year term of office. The Borough Council consists of six members elected to serve three-year terms on a staggered basis, with two seats coming up for election each year.