The guppy (Poecilia reticulata), also known as the millionfish,[1] is one of the most popular freshwater aquarium fish species in the world. It is a small member of the Poeciliidae family [females 4–6 centimetres (1.6–2.4 in) long, males 2.5–3.5 centimetres (1.0–1.4 in) long] and like all other members of the family, is live-bearing.

Robert John Lechmere Guppy discovered this tiny fish in Trinidad in 1866, and the fish was named Girardinus guppii in his honour by Albert Günther later that year. However, the fish had previously been described in America. Although Girardinus guppii is now considered a junior synonym of Poecilia reticulata, the common name "guppy" still remains.

Over time, guppies have been given a variety of taxonomic names, although Poecilia reticulata is the name currently considered to be valid.[2]

Guppies are native to Antigua and Barbuda, Barbados, Brazil, Guyana, the Netherlands Antilles, Trinidad and Tobago, the U.S. Virgin Islands and Venezuela.[3][4]

However, guppies have been introduced to many different countries on all continents, except Antarctica. Sometimes this has occurred accidentally, but most often as a means of mosquito control, the hope being that the guppies would eat the mosquito larvae, slowing the spread of malaria. In many cases, these guppies have had a negative impact on native fish faunas.[5]

Guppies exhibit sexual dimorphism. While wild-type females are grey in body colour, males have splashes, spots, or stripes that can be any of a wide variety of colors. 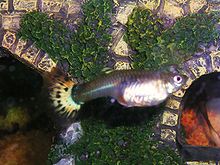 A pregnant guppy at about 26 days 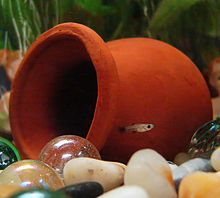 A guppy fry in an aquarium at one week old 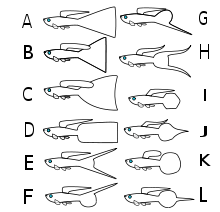 Guppies are highly prolific livebearers.[6] The gestation period of a guppy is 21–30 days, with an average of 28 days, varying according to water temperature. Males possess a modified tubular anal fin, the gonopodium, located directly behind the ventral fin, which is flexed forward and used as a delivery mechanism for one or more balls of spermatozoa. The male will approach a female and will flex his gonopodium forward before thrusting it into her and ejecting these balls. After the female guppy is inseminated, a dark area near the anus, known as the gravid spot, will enlarge and darken. Just before birth, the eyes of fry may be seen through the translucent skin in this area of the female's body. When birth occurs, individual offspring are dropped in sequence over the course of an hour or so.

Guppies prefer water temperatures of about 26 °C (79 °F) for reproduction. The female guppy has drops of between two and 50 fry at a time, typically ranging between 5 and 30. After giving birth, the female is ready for conception again within only a few hours. Guppies have the ability to store sperm up to a year, so the females can give birth many times without depending on the presence of a male. From the moment of birth, each fry is fully capable of swimming, eating, and avoiding danger. If not kept separate, the older, mature guppies will eat the fry, so the use of a breeder box, net breeder, or a separate 20–40 litres (4–9 imp gal; 5–11 US gal) tank is recommended. Live plants may be used as hiding places for the fry.

Young fry take roughly three or four months to reach maturity. In the aquarium, they are usually fed finely ground flake foods, baby brine shrimp or, unless they are put in a separate tank, uneaten food from the adults. In addition, they nibble on algae.

Guppies have been selectively bred to produce a variety of colors and patterns. In the wild, male guppies are dull black or brown in colour, with some coloured spots, while females are fully dull grey. The wild guppies that showed the most colours in each generation were bred to produce the "fancy guppies" seen in pet stores and guppy shows today.

The guppy has been successfully hybridised with various species of molly (Poecilia latipinna or velifera), e.g., male guppy and female molly. However, the hybrids are always males and appear to be infertile.[7] The guppy has also been hybridised with the Endler's livebearer (Poecilia wingei) to produce fertile offspring.

Guppies have 23 pairs of chromosomes, including one pair of sex chromosomes.[8]

Selective breeding has produced many different strains, such as the snakeskin and grass varieties. A strain is defined as a population of guppies that show the same characteristics.

The guppy prefers a hard water aquarium with a temperature between 25.5 and 27.8 °C (78 and 82 °F) and salt levels equivalent to one tablespoon per 5 US gallons (19 l; 4.2 imp gal).[9] They can withstand levels of salinity up to 150% that of normal seawater,[10] which has led to them being occasionally included in marine tropical community tanks, as well as in freshwater tropical tanks. Guppies are generally peaceful, though nipping behaviour is sometimes exhibited between male guppies or towards other top swimmers like platys and swordtails, and occasionally other fish with prominent fins, such as angelfish. Its most famous characteristic is its propensity for breeding, and it can breed in both fresh water and marine aquariums.[11]

Well-fed adults do not often eat their own young, although sometimes safe zones are required for the fry. Specially designed livebearer birthing tanks, which can be suspended inside the aquarium, are available from aquatic retailers. These also serve to shield the pregnant female from further attention from the males, which is important, because the males will sometimes attack the females while they are giving birth. It also provides a separate area for the newborn young as protection from being eaten by their mother. However, if a female is put in the breeder box too early, it may cause her to have a miscarriage. Well-planted tanks that offer a lot of barriers to adult guppies will shelter the young quite well. Java moss, duckweed (Lemna minor and other Lemna species), and water wisteria are all excellent choices. A continuous supply of live food, such as Daphnia, will keep adult fish full and may spare the fry when they are born.