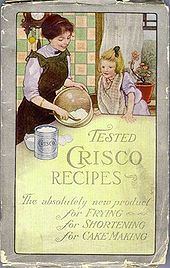 Cover of the original Crisco cookbook, 1912

Crisco is a brand of shortening produced by the J. M. Smucker Co. popular in the United States. Introduced in June 1911[1] by Procter & Gamble, it was the first shortening to be made entirely of vegetable oil. While the term Crisco is commonly used as a synonym for all shortening, Procter and Gamble markets olive, cooking, and baking oil and a cooking spray under that trademark.

Hydrogenation of organic substances in gas form was discovered by Sabatier in the late 19th century and while in liquid form was patented by Normann in 1903.[1] Procter & Gamble's business manager John Burchenal was contacted by and hired chemist Edwin C. Kayser, former chemist for Joseph Crosfield and Sons (who had acquired Normann's patent so as to produce soap), who patented two processes to hydrogenate cottonseed oil,[1] which ensures the fat remains solid at normal storage temperatures. Their initial intent was to completely harden oils for use as raw material for making soap.[1] After rejecting the name "Cryst" due to negative religious connotations, the product was eventually called Crisco, a modification of the phrase "crystallized cottonseed oil".[1]

Further success came from the marketing technique of giving away free cookbooks with every recipe calling for Crisco. Crisco vegetable oil was introduced in 1960. In 1976, Procter & Gamble introduced sunflower oil under the trade name Puritan Oil, which was marketed as a lower-cholesterol alternative. In 1988, Puritan Oil became 100% canola oil.

Procter & Gamble divested the Crisco (oil and shortening) brand (along with Jif peanut butter) in a spinoff to their stockholders, followed by an immediate merger with the J. M. Smucker Co. in 2002.[2]

In April 2004, Smucker introduced "Crisco Zero Grams Trans Fat Per Serving All-Vegetable Shortening," which contained fully hydrogenated palm oil blended with liquid vegetable oils to yield a shortening much like the original Crisco. From January 24, 2007, all Crisco shortening products were reformulated to contain less than one gram of trans fat per serving; the separately marketed trans-fat free version introduced in 2004 was consequently discontinued.[3] As of 2010[update], Crisco consists of a blend of soybean oil, fully hydrogenated cottonseed oil, and partially hydrogenated soybean and cottonseed oils. According to the product information label, one 12 g serving of Crisco contains 3 g of saturated fat, 0 g of trans fat, 6 g of polyunsaturated fat, and 2.5 g of monounsaturated fat.[4] It is claimed that this reformulated Crisco has the same cooking properties and flavor as the original version of the product.

According to the FDA, "Food manufacturers are allowed to list amounts of trans fat with less than 0.5 gram (1/2 g) per serving as 0 (zero) on the Nutrition Facts panel."[5]

Some nutritionists argue that while the formula has been changed to remove the trans fatty acids, the fully hydrogenated oil used to replace them may not be good for health. Crisco and similar low-trans-fat products are formed by the interesterification of a mixture of fully hydrogenated oils and partially hydrogenated oils. The composition of the resultant triglycerides is random, and may contain combinations of fatty acids not commonly found in nature.[6][7] A recent study showed that interesterified fat increased volunteers' blood sugar by 20 percent while simultaneously lowering the body's HDL cholesterol.[8]

While Kayser's patents were filed in 1910 and granted in 1915, with Crisco appearing on the market in 1911, Hugh Moore, chief chemist for the Berlin Mills Company in Berlin, New Hampshire, filed his patents by 1914 and they were granted in 1914 and 1916, with the vegetable shortening later trademarked in 1915 as Kream Krisp appearing on the market in 1914.[1] Procter & Gamble became aware of the competition by February 1915 and Burchenal contacted Berlin Mills claiming that they were infringing on P&G's patents and suggesting they meet to discuss the issue. When this failed P&G filed suit against Berlin Mills, the litigation being known as "Procter and Gamble vs. the Brown Company" (Berlin Mills Co. v. Procter & Gamble Co., 254 U.S. 156 (1920)), since in 1917 the Berlin Mills Co. became the Brown Company.[1]

As a sexual lubricant, it has been popular for some 40 years, as it is long-lasting, cheap, and does not exude a strong odor. However, as with other oil-based lubricants such as Vaseline, it can degrade latex and is unsuitable for use with latex condoms.[9][10]
The UK band Frankie goes to Hollywood had a song on their Welcome to the Pleasuredome album called Krisco Kisses related to the product's use in the gay scene.