Degania Alef (Hebrew: דְּגַנְיָה א'‎‎, D'ganya Alef) is a kibbutz in northern Israel. It falls under the jurisdiction of the Emek HaYarden Regional Council. 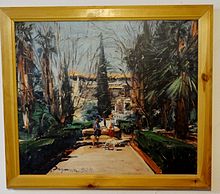 Degania Alef painted by Ludwig Blum in 1934. "The big house" - the scond house that was built in Deganya

Degania Alef was the first kibbutz established by Jewish Zionist pioneers in Palestine, then under Ottoman rule. It was founded in 1909 by the World Zionist Organization. In 1910 the land was handed over to a commune of workers which established itself on it in 1911.[2] Degania Bet was established to the south in 1920. On May 20, 1948 during the Battles of the Kinarot Valley, Degania Alef and Degania Bet repelled a Syrian attack.[2]

Degania Alef has been home to many prominent Israelis and members of the Yishuv. The poet Rachel, the "prophet of labor" A.D. Gordon, and Joseph Trumpeldor all worked at Degania Alef, whilst many early members of Degania Alef left to found other kibbutzim. Gideon Baratz was the first child ever to be born in a kibbutz and Moshe Dayan was the second, both in Degania Alef. Dayan was named after kibbutz member Moshe Barsky, the first kibbutz member to be killed in an Arab attack.[3] Barsky was killed in November, 1913. He was alone in the kibbutz fields when he was shot in the back and left for dead by Arab marauders.[4]

Both Deganias lie along the southern shores of the Sea of Galilee. Technically, Degania Alef is a kvutza and not a kibbutz - the distinction comes from its small size. Degania Alef is also distinctive in that children there never slept communally - children always slept in their parents' quarters.[citation needed]

In 1981, Kvutza Degania Alef was awarded the Israel Prize, for its special contribution to society and the State in social-human pioneering.[5]

In 2007, Degania Alef announced that it was to undergo privatization."[6] Instead of assigned jobs and equal pay under the rule of the elders, the reorganization will allow people to seek their jobs, earn their salaries, and own their homes, but still offer a social "safety net" for the weaker members of society.

In 1947 Degania Alef had a population of 380. During the 1948 Arab-Israeli war, the settlement was completely destroyed by the Syrian army.[7] According to a 1949 book by the Jewish National Fund, the village was destroyed following attacks on the neighboring Jewish villages of Shaar Hagolan and Massada. The settlers resisted, however, and launched a counter-attack which help to recover the neighboring settlements. Reconstruction started almost immediately. The name is derived from "dagan," meaning "corn." [8]