The expression migrants' routes suggests the main geographical routes tracked down by migrants.

From Africa, the routes mainly head towards Europe, however they are slightly changing in the last years, moving towards South Africa and Asia. 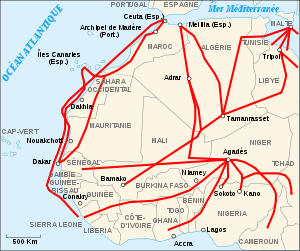 The majority of the African migrants haven't got European travel visas, therefore their only accessible ways northward is that of travelling through the transSaharan routes. These routes are often shaped on the old ones used by caravans and during transumanza through the desert and on renewed and informal local networks, bent on the new survival needs and to pitiless rules of competition and exploitation.

About the 10% of the whole migratory stream uses sea routes.

The major part of African migrants usually doesn't go beyond the coastal regions of the North Africa, putting their journay to an end in one of the Mediterranean coastal countries (especially in Libya and in Maghreb, where nowadays almost 2 millions of irregular migrants live).

Just a few migrants (between 10 and 15%) tries to head towards Europe facing control and repression policies adopted by any countries against irregular migration. The unexpected migrants' stream towards North African countries, together with the European effort and help to restrain this stream coming from Sub-Saharan Africa, prompted local governments to adopt repression and forced homecoming measures. According to the lack of repatriation agreements, migrants are mainly brought to the southern areas bordering the neighbouring countries (Rosso, near the Mauritania-Senegal border; Oujda, near the Morocco-Algeria border; Tinzouatine and In Guezzam, respectively near Algeria-Mali and Algeria- Niger borders).

While the European policies,which have submitted the migration check to the coastal local authorities, seem to be effective in restraining the maritime migratory stream coming from Maghreb (though indirectly increasing human rights abuses), in 2007 trans-saharan and maritime routes from Africa have spread all over both modifying primal origins and increasing distances, human and material loss of the Great Migration. New routes have developed directly from Sub-Saharan countries (Senegal, Gambia, Guinea coast) creating new entry paths (i.e. between Algeria and Sardinia) and new migratory strategies (i.e. the increasing number of underages because less exposed to the risk of forced homecoming), which have partially varied the migrants' origins (fewer migrants from Sub-Sahara and more from Egypt and Morocco) but still not reducing the migratory pressure from Libya, which is still the major source of people migrating towards Italy and the main spot of departure for the European dream.

For many migrants, who try to cross the various African borders and their complex security, crime or corruption systems, this is a real human odyssey, about which in many cases we lack traces and witnesses. The journey is not only very expensive (people earning less than 1 Euro per day may spend thousands of Euros for this journey), but also very hazardous as far as life is concerned. The number of human losses during journeys across the desert, the sea or during other stops is really huge. The reasons that prompt people to undertake the journey are mainly economic, for people in search of better life conditions, but also cultural and symbolic (i.e. in Sub-Saharan Africa the journey is mainly meant as a different way of undergoing the traditional rites of passage.

Through the modification of control and repression measures, the Sub-Saharan African migratory process is changing and therefore gradually tracing new maritime and overland routes, soon led by criminal organisations and networks of local go-betweens, which create new collusion between the police and the so-called passeurs within the exploitation of human beings.

This is the first migratory route, which covers the old caravan trail passing by Agadez and Dirkou (in Niger) and the Sabha oasis (in Libya), and was went through in the first 1990s from a huge migratory stream appealed in Libya by political measures aimed at opening the borders introduced by Muammar Gaddafi in 1992.

In the last years the Libyan migratory policy has been aiming at contrasting the Western embargo and at supporting the use of Southern foreign workforce in order to overcome the productive lack especially in the field of agriculture and construction. These measures have been blocked after xenophobic reactions occurred in 2000 in Tripoli and Zawiya.

From then onwards, Libya, being the country with the majority of immigrants among the local countries (about 1 million and a half immigrants among 5 millions and a half inhabitants, mainly distributed on the coastal area), aims at restraining and repressing irregular migrants. Libya and its policy have been supported (despite the continuous human rights violations) by the agreements on the control on irregular migrations signed together with the European countries (especially Italy).

Following the widely reported drowning of over 200 migrants traveling from Libya to Europe in March 2009, the Libyan Interior Minister Abdelfattah Yunis al-Obeidi announced an agreement with Nigerien Interior Minister Albadé Abouba to begin joint patrols to stem the flow of migrants through Niger into Libya. The majority of Sub-Saharan migrants who travel through Libya come by this route.[1]

From 2000 onwards has been traced a new much more westward oriented route, which gathers the migratory stream moving from Sub-Saharan Africa, which is mostly exposed to conflicts and crisis (such as Nigeria, Côte d'Ivoire, Liberia, Mali, Burkina Faso, Niger, Central African republic, Cameroon, etc.) as well as the smaller migratory stream coming from Central Asia.

So, nowadays migrants rediscover and go through the old routes of Sub-Saharan caravan networks covered for centuries by nomadic people (Tuareg) from Mali, Niger and Algeria.

The new joints passed through by caravans reshape the urban landscape and many cities, like Agadez and Arlit in Niger, Bamako and Gao in Mali and Tamanrasset in Algeria, are filled with migrants and other people involved in the handling and transporting illegal migrants.

From these junts migrants head especially towards Maghnia on the Moroccan border and the Spanish enclave in Ceuta and Melilla on the coast, where they continuously try to cross the barriers in defence of the cities or to reach the nearest spots on the Algerian and Tunisian coasts. Between 2000 and 2005 the migratory pressure in Morocco has increased and reached its highest point in summer-autumn 2005, when hundreds of migrants assaulted the barriers of the two Spanish enclaves (Ceuta and Melilla), causing the death of dozens of people and the injure of hundreds of people.

The renewed policy of cooperation between Madrid and Rabat, launched by Government Zapatero in 2004, prompts Moroccan authorities to adopt measures to dissuade and restrain irregular migration, causing a new southward movement of the migratory routes toward the Canary Islands.

The third route toward the Spanish Canary Islands, located in the offing of Mauritania, has a long history of irregular migrations, which has been increasing from 90s onwards because of the gradual closures of the way outs northwards.

The new restraining measures on the Mediterranean coasts, following up the agreements between Italy and Spain, are gradually moving the migratory pressure on the maritime route between El Aaiún in Western Sahara and the Canary Islands. This trail lasts almost a night. As time goes by, the fishermen' ships (dugout or pateras) of the Western Sahara, which have been strengthened with more powerful engines and therefore are more and more crowded with irregular migrants, are forced to start their journey from coastal spots more and more far-away from El Aaiún route. On the other hand, the restrictions adopted on the Mauritanian and Moroccan coasts deter fishermen from attempting this long journey and the starting points are no longer the Western- Saharan ones, but they become southward oriented, including the coasts of Senegal, Gambia and Gulf of Guinea.

The economic costs and the losses of human lives during the passage to the West and the resulting exploitation processes are due to the increase in distance and to the risks of the transfer. Migrants, helped by a compass and little information on the driving of a boat, are in charge of leading it and this behaviour considerably increases the risks of the transfer. This also leads to an increasing number of castaways on the Atlantic coasts.